Face To Face: Our Own Dr King Ready To Shake The Political Throne 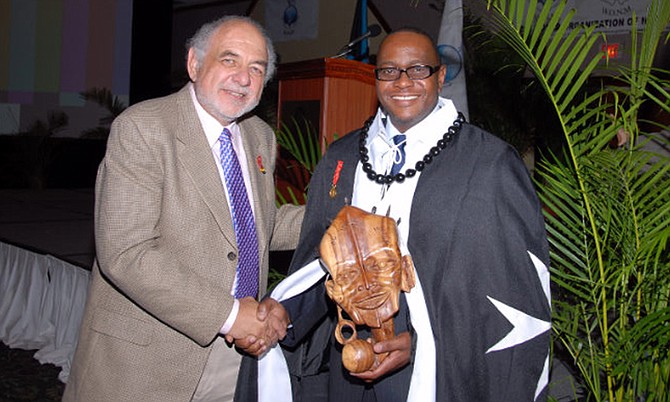 Dr Kevin King, pioneer in natural medicine in The Bahamas, received gifts from around the world including one from Professor Viktor G Lizogub, Director, Ministry of Health, Ukraine.

It takes a lot of guts to start your own political movement. Many people have complaints about the system of government. People call in to the talk shows, they make their social media posts and they speak out at town meetings. Some people will complain to whoever will listen. But how often does someone take a bold step and actually form their own group and seek the support of the Bahamian people at the election polls? Very few have… and hats off to those who have put themselves on the line in this way.

The Bahamian society can be harsh, judgmental and difficult to persuade to make a change, as much as people may complain. Dr Kevin King knows this. Yet in 2018, he introduced the Kingdom Government Movement (KGM). He refers to it as “The Voice of Change” and on Friday, March 20, he will introduce his first set of candidates. Eventually, the KGM will present a full slate of candidates who will contest every seat in the country. KGM sets out to become the first organisation to successfully upset the two-party trend that has defined the political culture of the country and come up with a win. 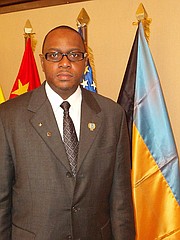 The KGM has a vision to accomplish certain things if elected, within the first 30 days in office. They include: reducing VAT from 12 percent, back to 7.5 percent; calling for a referendum to replace the Westminster system with a parliamentary republic system; calling for a referendum to replace the monarchy, Privy Council and Governor General as head of state; introducing a new Bahamian land ownership policy; implementing new, affordable housing systems; implementing new manufacturing, industries and renewable energy platforms.

So, what does it take to make such a bold move? Kevin says it was God himself who gave him the instruction to create the KGM with a philosophy to “uphold the preamble of the Constitution of the Bahamas, which recognises the Bahamas as a Christian Nation under the supremacy of God”.

It’s not the first time he has received a Divine message. He first started hearing the voice of God speak to him at the tender age of eight and ever since, he has been listening to the voice that has allowed his life to unfold in a miraculous way. He was born in Nassau to Olive Louise King, nee Stubbs and he is one of eight siblings. His ancestors include Gabriel Nairn and Ophelia Ramsey of the Cove, Cat Island, and he is the grandson of Alfred King of Knowles, Cat Island and Maude King of Adelaide Village. He spent most of his childhood in Adelaide. Even to this day, Adelaide is still a quaint, sleepy village with beautiful natural habitats around. He also spent some of his formative years in Freeport, Grand Bahama.

“I used to go out to the pine yard by myself and sit down,” Kevin recalls of his childhood.

“I was in tune with nature. Birds and insects would come around. Sometimes, I would be there hours on end. My childhood nickname was Gubby. My brothers and sisters would say, ‘Gubby gone into the wilderness’. Once I was finished my chores, that’s where I would go, and God would speak to me.”

When Kevin was in primary school, he would find moments to be alone to pray. When kids would go out at playtime, he would stay in class, and close the windows so that he could commune with God alone. He cherished opportunities to have conversations with God.

“That continued all through my life,” he shared. “I was a part of every Christian movement that I could be growing up. As an adult, I was ordained as a prophet and a pastor. I have travelled all over the world ministering. It consumes me.”

As a minister, Kevin made history when Messianic Jewish Ministry International, Hebrew Torah Institute and World Prayer Towers appointed him as the director of a new World Prayer Tower established in The Bahamas. It happened during a special dedication service at Bethany Assemblies of God where he was anointed with oil by Rabbi Daniel Jeshurun Vargas, founder and executive director.

Kevin grew up in the Anglican and Catholic churches, and came under the tutelage of Father Caldon in Adelaide, Bishop Michael Eldon, Father Brennan, Father Pestaina, and Father Richardson. Later on he attended the Assemblies of God, guided by Pastor Ferguson, Gilbert Roberts, Ernie Deloach, Bishop Jonathan Carey, Bishop Sobig Kemp, Pastor Roberts, and Bishop Ross Davis. He attended many Bible schools including West Indies College in Mandeville, Jamaica. He also sang in many gospel groups. To date, he has studied numerous religions all around the world.

Dr King has represented the country at natural medicine councils around the world for the last 30 years.

In the 1980s his studies also took him to the US and there, he worked in sales and moved up the ranks to management. He also worked in the restaurant business and even served as a bodyguard at one point. Kevin appeared in television commercials and he also frequented WEDR, where he learned radio announcing from Leo, Jimmy G, and Super Jerry Rushing. He returned home and worked in sales for ZNS radio and television in Grand Bahama. For a while, he pursued his interest in law and studied with “brilliant attorneys like Stephen Wilchcombe, Moses A Hall, Fayne Thompson and Kenneth Lewis”.

By the 1990s, Kevin decided to change his profession. He took up medical studies at Concord Career Institute in Miramar, Florida. He was at the top of his class and was doing well when he said the voice of God spoke to him. He was instructed to study natural medicine and provide the people in his home country with this service. He took a big leap of faith and answered the call. He studied natural medicine in Sri Lanka, The Philippines, Hong Kong, Canada, Ecuador, New Mexico, India, Australia, and St. Kitts and Nevis. He has been a practicing physician for nearly three decades and is considered the pioneer of natural medicine in The Bahamas. He has had clinics in Freeport, Abaco and Nassau simultaneously.

Kevin has been knighted by St John’s of Jerusalem Knights of Malta for his success in Alternative Medicine. He was also knighted by The Orthodox Order of Saint John under Prince Michael of Russia for his worldwide humanitarian services. In 2004, he was commissioned by the college of Bishops to the nations.

In the same year, Kevin became an International Diplomat and was presented to former Prime Minister Perry Christie by His Excellency Charles Henry McWilliams, and his credentials were presented to then Minister of Foreign Affairs Fred Mitchell. He belongs to many world organisations in health and science and he has lectured to thousands throughout North America, the Caribbean, Europe and Asia.

Kevin was elected as the Chairman of the World Organization of Natural Medicine at a world congress in Quito, Ecuador. He has met with world leaders and Heads of State of many countries around the world, both on diplomatic missions and advancing the cause of Alternative and Natural Medicines.

His latest calling, the KGM, he seeks to “enlighten the people of The Bahamas on its philosophies of governance; in that it is NOT a movement of politics with all the nefarious nuances inherent in the party affiliations that is the basis of the Westminster system”.

“Kingdom Government is a righteous movement that has a purpose of purity to enact real and lasting change for the benefit of the people of the Commonwealth of The Bahamas, at a time when it is necessary and needed the most,” he said.

“It is not a political party but rather a Paradigm of Progress. We accept this mantle of responsibility in abject humility with an edict of Divine service to the people of this country.”

On April 6, 2018, Kevin made his inaugural speech. By October of the same year, he officially launched KGM in New Providence and in Grand Bahama. Samuel Johnson serves as the chairman and Calvin Greene is the national campaign manager. For more information on the Solutions Campaign which will release its candidates this March, visit kingdomgovernmentmovement.org or contact Dr Kevin King at sirkevinking@live.com, or call 810-2694 or 434-2831.

Only a bigger than life fool with the surname "King" would put the words "Kingdom" and "Government" in the name of any kind of movement he has created with the hope of it somehow becoming a legitimate political party. Definitely the joke of the day! LMAO