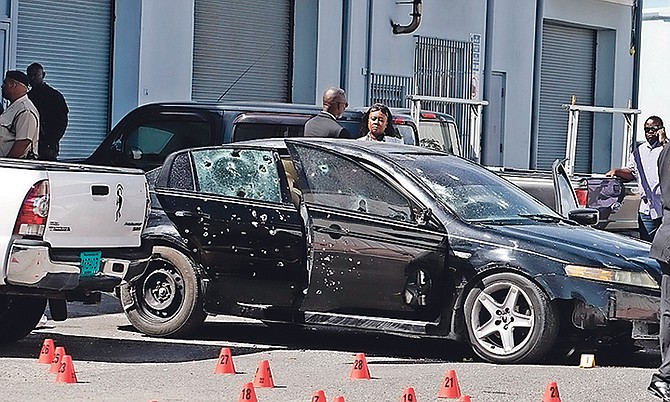 The car riddled with bullets at the scene of the police shooting on Mackey Street. Photo: Donavan McIntosh

POLICE shot and killed one suspect and wounded another after one of the men opened fire on officers who foiled an armed robbery at a Mackey Street bank Monday morning.

At the scene, Chief Superintendent Solomon Cash told reporters officers received intelligence a robbery was going to occur at the Royal Bank of Canada branch. “The information was checked by officers, hence officers acted on that information – came to this location,” CSP Cash said.

When The Tribune arrived on scene, a black Acura with no licence plate was seen riddled with bullets. The deceased suspect was inside the vehicle. CSP Cash was unable to give the names or age of the men, but said a weapon was found on the scene and no police or civilians were hurt.

This is the second time this month an incident like this occurred. On February 11, police said two men entered Portraits-a-La Sawyers photo studio dressed in white jumpsuits and claiming to be window cleaners. They then allegedly duct taped the proprietor and a worker and tried to steal a large sum of the cash.

Police shot and wounded a suspect during the incident. Two men have since been charged in connection with the matter, accused of trying to steal more than $200,000 from the photo studio.

Last week, suspects robbed a jewellery store on Paradise Island of luxury watches. There have also been a string of armed robberies and home invasions reported since the start of the year.

When asked if police were concerned about an apparent increase in these type of crimes, CSP Cash said: “There is concern from officers, but I can tell you we are relentless in what we do. We are currently investigating several of these matters. As a matter of fact, we can say to you that we have already identified several possible suspects who are on the run... and we are asking the members of the public to assist us in locating these suspected persons.”

He added: “We have some information that there may be some rings operating and again we have identified several of these rings.”

He also said police have been monitoring local banks and will continue to do so. He warned civilians to stay out of the way when police are engaging with suspects.

“What we want to say to private citizens that if they see the police engaging in any activities that we ask them to remove themselves because who knows when we deal with suspected persons most of the time in the process of them trying to evade law enforcement they might just open fire to prevent us from capturing them,” CSP Cash said.

"He warned civilians to stay out of the way when police are engaging with suspects."

I sympathize with the police. Our usual pattern has been for robberies to increase during the holiday season then die down after. It looks like they've increased tenfold since the new year started.

But the police cannot absolve themselves of reckless behaviour by saying those 20 people got shot because they didn't "stay out the way" like we advised then to. It's the officer's responsibility to ensure that innocent members of the public are not in harm's way when they engage criminals. What that looks like probably differs in each situation, but the police training should have them thinking strategically rather than with brute force. Were all those bullets really necessary on that car? Could they have blocked exits and negotiated with the men to give themselves up? Do we have a negotiator or is the strategy to kill everybody? (they indicated that they knew this was happening pre-robbery) I dont know maybe our criminals are more desperate and shooting them up is the only solution...maybe they fear brutalization so much if they're captured that they make these John Dillenger decisions...its just odd everybody gatta get shoot up.

I am all for better police training and an increase in salary so that we have a more professional police force. However, given our current limitations the police deserve kudos for putting themselves in harms way and performing as well as they do. This country is awash in Illegal handguns and even more powerful weapons. Isn’t it curious that in this article there was no mention of the type of weapon seized, and the police declined to comment when asked by other journalists? There are social media reports as to the nature of the weapon involved. Footage of the scene showed a swat team there. The police were obviously prepared and acted according to intelligence they had. When in some circumstances the police are outgunned it is no wonder they respond with what seems an excessive and unnecessary amount of rounds.

I live in seemingly peaceful Long Island, and I have seen the police come to greet the mailboat with sub-machine guns, they know the types of weapons that are illegally in this country.

What article says 20 people were shot?

It didnt. It was an example. We have more than enough examples in the past month with police engaging in excessive or at least ill advised gunfire in public places.

The police officer said he's warning members of the public to "stay out the way". What dat mean? Suppose you stop to the ATM to get some lunch money for your kids and you giving your neighbour and her child a ride to work? The police need to adjust their approach. Maybe it's Dames who thinks he's Elliot Nest. He also authorized excessive force to kill those guys up in Blair...completely unnecessary. The story doesn't end when the criminal gets killed, like the news report today demonstrated, the family members and friends will wonder for years, why you had to kill my relative like that? It was not necessary.

according to the article, the men came out confronting police with deadly force. In that situation, there is no time for negotiation, respectfully. i lament the crime in the Bahamas, but I would not want to be in a situation where I must make a split decision that involves death. Thank you to the decent police officers ! The other corrupt police officers, do better.Young individuals, there is more to life than buying designer clothes, jewelry, fancy cars, and the latest cellphones for your BOO. Be contented with your lot in life, and if you want to change it, do it the right way.

bit the police said they got a tip the robbery was going down. maybe if that was a little clearer, did they get it before the guys got there or did they get it as the robbery was in progress. I still maintain there must be a better way. In "big" anerica with all the guns the only time I hear about these dramatic shootouts is on the movie screen

I would send the police to gun range training for marksmanship lessons. If there were only two suspects in the front seat, why is the entire car peppered with bullet holes, even in spots where there were no suspects? My God, the police are bad shots-- either that or very trigger happy.

Have you ever handled a weapon even on a shooting situation? With at least one other person in the car at the time of the initiation of shots, what would you have done? I guess delivered a well placed singular shot that ended the situation?

the thing that continues to puzzle me is the police seem to indicate that they knew this was about to happen. There must have been a better outcome. Could they have followed them in unmarked cars and captured them at a safer location when they werent on guard? how many exits you have from Mackey street? Im not saying I have the answer I just refuse to believe this was the only outcome.

'Sting operation?' From picture we're talking some massive rounds of constabulary's bullets that were fired at and into the suspected of being the vehicle fitting the profile as described by the information.

The outcome might have been better if they had decided to just get a job and live within their means, but that's too difficult for too many these days. I bet right now,someone, somewhere is crying for their good son who never hurt anybody!

We need fund a program to spot potential criminality before it takes hold. One way do this would be brung targeted comrade persons in for consultation with trained Behavioral Specialists

This matter should be investigated. The police said one came out with a gun.. and they feared for their lives. Before that occurred. There was no crime.

Many bullets were in that car.. Why so many?

An increase in armed robberies coincides with an increase in taxes, food, rent, and the overall cost of living in The Bahamas. All whilst minimum wage remain less than 300 dollars a week.

I fail to see why politicians can't see this. The Bahamian people are broke and struggling, so they are resorting to violent and drastic measures to make ends meet.

I have no sympathy for the criminal element! They got what they deserved!! Kudos to our officers for taking them off the streets. Some of you are complaining about the number of bullets used, imagine if those guys had been able to carry out their plan. Some one you know could have been caught up in that robbery and gotten killed.

This is not the time to be sympathizing with criminals. It's either them or us. Let the cops do their jobs, even if it means riddling a criminal's car with hundreds of bullets! Just get the hell out of the way and allow them to do what is needed.