Lewis: 34 Domes Will Be Ready In Abaco By Friday

A model of the Family Relief Centre’s dome structure that will include plumbing, drainage, a sewer system, and electricity. Photos: Shawn Hanna/Tribune Staff 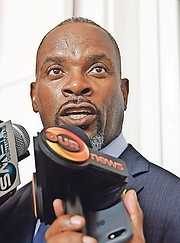 MINISTER of State Disaster Preparedness Iram Lewis said at least 34 domes will be ready at the family relief centre in Abaco this Friday. "There was an issue with the utility connections, they are in place so it's just a matter now of putting in the utility supplies and then families will be able to move in by this Friday," he said. According to Mr Lewis, all of the domes that are ready have two bedrooms. He also confirmed that "more work is underway".

Asked whether persons had been selected to occupy the completed domes, he added: "I'm not sure, but we do have a process by which we will select them and of course displaced Abaconians will be considered first."

Mr Lewis also said officials are in the process of identifying a mass burial site for unclaimed storm victims in Abaco. "Certainly there will not be one grave," he said. "The idea is to have it all in one location with each of the graves marked so that at the end of the day, once all of the DNA (is) finalised, persons (who) wish to exhume the bodies and so forth, that can be done.

"To make it easy (and) to make it simple as far as I am aware, it will be perhaps in one general area."

Still, Mr Lewis said he was not sure if a location had been identified as yet.

"It's in the hands of local government who has responsibility for cemeteries, but once we have all the pertinent information we will advise the media."

He added that an exact date has yet to be confirmed because officials have to consult the family members of the storm victims in Abaco.

"I'm not sure that a meeting was had yet with those family members, but once that is also determined, the media will be advised," he said.

When asked whether he believed the DNA process of analysis had been exhausted at this point, Mr Lewis declined to comment, stating he was not qualified to speak in that area.

While speaking to reporters outside Cabinet yesterday on the same issue, Health Minister Dr Duane Sands insisted that the government has handled the situation humanely and fairly. He also confirmed that all of the unclaimed bodies of storm victims in Abaco will be given "Christian burial rights" once the plot of land is identified.

"Each set of remains will be interred in an individual plot which will be indexed so that if there are appropriate matches to DNA or identification, then family members would have the ability to get closure," he explained.

"As of today, I'm advised that there has been no match of DNA with any of the remains to any individual who has come forward and so notwithstanding the fact that there are claims that has not been worn out based on what I've been advised by the DNA."

Dr Sands said that although officials have had "several rounds of DNA, based on (a) conversation with the pathologists", there has been no match to date.

He insisted that while there may be "competing concerns", the public must be mindful of the concerns of the surviving family members of storm victims.

"And while it may be inconvenient for others, I think we need to understand that there are people who have lost a wife, a husband, a grammy, a child and they are the greatest victims here," Dr Sands said.

Yesterday, Mr Lewis also said his ministry and the National Emergency Management Agency (NEMA) are working diligently to ensure the country is prepared for the upcoming hurricane season.

Mr Lewis said while officials are still involved in recovery efforts from Hurricane Dorian last September, their preparations for the 2020 Atlantic Hurricane season will be completed come June.

"The question is asked, are we ready today? No, but of course we do have time," he said. "Are we getting ready? Yes. Will we be ready? Yes.

"I'm confident that NEMA with the (Ministry) responsible for Disaster Preparedness and Management, we're putting the necessary pieces in place. We've had our workshop (and) training is now ongoing on some of the islands."

Mr Lewis said that officials had a training officer in Exuma just last week. He added that announcements with regards to "logistics and disaster time response", are "coming up in short order".

"That is being spearheaded by Captain Russell and the agency NEMA, and, of course, once those workshops and those deadlines are finalised, we would advise the public because we realise that in NEMA we have to build capacity," he explained.

"We have to decentralise NEMA and put the same facilities in place that we have in Nassau on other islands like Abaco, like Grand Bahama, like a central zone and also a zone for the south."

Mr Lewis said the "plan down the road" is to build new shelters that would fit this criteria. Still, he said in the "meantime", officials will go through all of the buildings that were identified as hurricane shelters to "ensure that they can adequately function" as reliable structures.

So ... 5 months after the storm we have almost completed 34 tinfoil tents. Wow. Congrats. This calls for a big banquet for govt. officials in Nassau to celebrate.

They have been saying the same thing for the past 4 months. "Domes ready by Friday" These people must really think the average Bahamian has short term memory loss.

Just a few articles relating to this same exact issue. What a Sh*tshow!

Still no costs to PopulacesPurse report - outlining what kind financial 50 rooms rental deal did the Imperialists red cabinet - strike with owner that Hotel on Bernard Road to temporarily relocated and housed Hurricane Dorian shelter residents out of the gymnasium?

Five months. 34 domes ready. Hurricane season here in 4 months. I guess we should be grateful!!!