Ferguson Told - Your Days Are Numbered 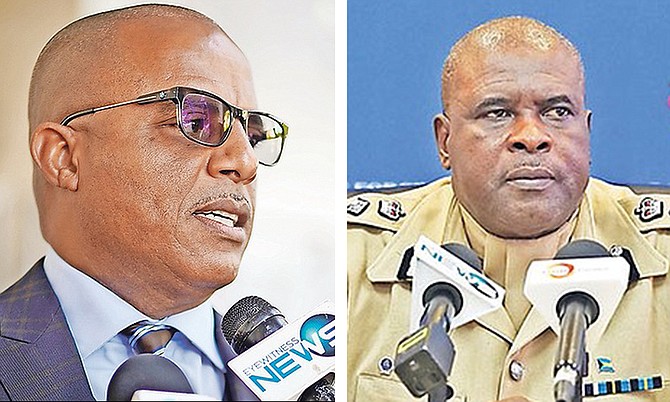 NATIONAL Security Minister Marvin Dames yesterday said Commissioner of Police Anthony Ferguson should by now have identified a successor, as he said the police chief is “nearing the end of his reign” over the Royal Bahamas Police Force.

Mr Dames, in delivering a speech during the Royal Bahamas Police Force’s annual church service, said Commissioner Ferguson as well as his executive team should “know by name” the next generation of leaders, adding his focus should be on preparing the “next crop of leaders” ahead of his inevitable departure.

Mr Dames told reporters afterwards that when that time comes, the police chief, who has served as commissioner for more than two years, should ideally be “ready and excited to move on,” because he, like many others in the RBPF are “all just passing through”.

Mr Dames suggested that the RBPF is just one of the country’s various law enforcement agencies that is “going through some form of restructuring” internally, meaning that “anything is possible” in terms of who leads these agencies. And because of that Mr Dames said, neither Commissioner Ferguson nor his executive team should be “intimidated” to call the name of their successors, and neither should they “be afraid to prepare them for future leadership”.

“That is what good leaders do,” Mr Dames said.

To that end, Mr Dames said the impending RBPF promotion exercise will not be conducted based on politics, nepotism, “or what a junior officer did for a senior officer”, but rather on whether officers possess the necessary “skills and competency” to “hold the ranks to which they aspire”.

Commissioner Ferguson, who enlisted in the RBPF in November 1980, officially became commissioner of police on October 20, 2017, after serving as acting commissioner for several months leading up to that date. He succeeded Ellison Greenslade, who has since been appointed high commissioner to the United Kingdom of Great Britain and Northern Ireland and as permanent representative to the International Maritime Organisation.

Last year, a police insider told The Tribune that the commissioner and former Royal Bahamas Defence Force (RBDF) Commodore Tellis Bethel were reportedly among a group of persons slated for pre-retirement leave in the near future. Commodore Bethel was recently sent on three months’ vacation and is due back to work this month.

And that came after eight senior officers controversially received notice to take accrued vacation leave effective immediately in March of last year. Some of the officers’ leave was pre-retirement.

In making his remarks during yesterday’s church service, Mr Dames singled out the police chief on the issue of the RBPF being “modernised and restructured,” saying: “Commissioner Ferguson, by now you and your executive team should know by name the next generation of police leaders. You should not be intimidated to call their names, nor should you be afraid to prepare them for future leadership. That is what good leaders do.”

Concerning “all of those officers, senior and junior who are nearing retirement,” Mr Dames then mused aloud: “How do you see your legacy? Have you done your best to bring out the best in those around you? Has it always been about you and you alone? Your answer to these questions will determine the future outlook of the agency you would have had sufficient time to positively impact.”

Mr Dames added: “I contend that your focus should not be about trying to get promoted before you leave. Rather, you should ask yourself if you did enough to guide and nurture the next generation of senior officers. We will all be the better and safer for it.”

When questioned on the issue by The Tribune after the service, and for him to clarify the significance of highlighting Commissioner Ferguson in particular and his executive team during his remarks, Mr Dames replied: “We’re all just passing through.

“We’re working to build an organisation or agency for the future. All of us have a vested responsibility to ensure that we prepare the next crop of leaders. We have an obligation to do that. Because at the end of the day, it’s not about us individually, although we do look for some individual reward.

“At the end of the day it’s the quality of service we provide to the Bahamian people. And that’s what we’re seeking to do. And that’s why we’re working locally as well as internationally to professionalize these agencies, to bring them in line with international standards.”

No GAMES Tight pants. should be ashamed of himself.. he will do well to remember that he can do

as much as he likes , but not as long as he like. I Trust he has his bags packed and at the door, The Bahamian people will be glad to see NO MORE DAMES.

If he had shame he damn pants wouldn’t be so tight!

What a Happy New Year, Merry Christmas message to give to your most senior staff during the festive holidays in front of a packed church. Imagine how the top brass of the police force must have enjoyed the remainder of the service then face their junior officers as they left the service. Lame Duck officers! My God have mercy.

Seems like persons are being stripped of their offices as a reset the dial against public outrage move...basic implication that all the bad news will be attributed to the guy who just got kicked out. The same thing happened to Greenslade and Tellis Bethel.

Ask why. ... you can't male up. you just, can't where but under this colony's inept performing Imperialists red government, would a low performing Comrade Chief Royal Constabulary, *would even be the one that gets recommend their replacement?

This man's days in any position of authority should be ended.

However all said, couldn't something be mentioned about the broken system policing inherited by Comrade Anthony from Chief Ellison Edroy?
You can't make up, you just, can't begin properly fix something broken - unless you possess the proper mindsets to set in place the required processes, materials and tools to begin fix the brokenness rot staring at helm of, and throughout, the ranks colony's Royal Constabulary?

Mr. Ferguson and Mr. Seymour joined in 1980.. do that math, 1980 plus 2020.. 40 years, While a commissioner can go to 65, 40 years is usually his max. We have to be joking if you still want these guys. While they were good, there are people under them who need to be developed to take on the torch. It's not political. Perhaps only those of us who wore the uniform understands it.

Two saying it is not what you do. it is how it is done. Respectfully.

New brooms sweep clean but old brooms know where the dirt is.

There is no excuse for this announcement in this setting at this time. utter foolishness from a pompous Man.

Government must revisit the mandatory retirement age for civil servants and especially those who hold key positions. The life expectancy has increased and many of these persons will live into their 80’s. This means many will be on fixed or retirement income for at least 20 years. Half the time they spent in civil service. Not only will they hit difficult financial times but unless they force Nd alternative employment this extended retirement will be emotionally taxing. And even if they are not allowed to stay on in their key roles, government should allow them to continue with the organization if only part time. This attitude of your have served your time , now get out attitude has to stop. It is counterproductive.

Poor choice of words regarding the commissioner in public. How embarrassing! If you want to make a change then bring the man in and tell him that behind closed doors, and allow him to bow out gracefully.