Insight: The Clock’S Already Ticking - We Can’T Afford To Be Unprepared A Second Time 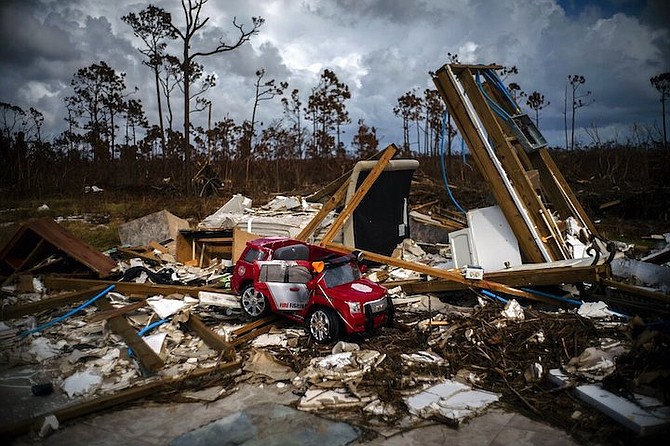 ONE of the best things about a new year is that it serves as a reset to the year before. We entered 2019 optimistic for an economic turnaround marked by a record year in tourism, and hopeful that our streets would be safer after experiencing the lowest murder rate in years. Bahamians, despite a rising cost of living with VAT increasing from 7.5 to 12 percent, were quietly confident that things may be looking up – with lower levels of unemployment and major projects in the pipeline for Grand Bahama on the horizon.

Then, Hurricane Dorian happened, and we got set back what feels like years.

For 20 years, we’ve been waiting for Grand Bahama’s economic turnaround but then the absolute obliteration of one of the country’s most picturesque islands completely altered the country’s outlook by the end of 2019. Bahamians, by and large, have experienced hard times since the 2008 recession and the prognosis, even more so now, looks dire. With thousands of Bahamians displaced and many still waiting on funding from the government to rebuild their homes, much of our optimism feels in vain. Instead, we are left hoping to be spared a sequel in the 2020 hurricane season.

Certainly, the reality of climate change presents a gamble for any resident living in a jurisdiction vulnerable to the catastrophic effects of hurricanes. However, there is still little evidence to show the government has learned its lesson and will be better prepared for the next hurricane season when it arrives as right now, all we have to go by is their words.

Various ministers interviewed by the media on the sidelines of the New Year’s Junkanoo Parade seemed quite optimistic that the government will be better prepared. Others seemed merely hopeful – perhaps the best one can do when negotiating with Mother Nature.

Minister of Social Services Frankie Campbell, when discussing plans for his ministry this year, touched on the government’s learnings from Hurricane Dorian. He stated: “Dorian notwithstanding, we’ve learned some lessons. I believe that hurricanes of that magnitude are likely to be more frequent, but we will be better prepared from the lessons that we’ve learned.”

Deputy Prime Minister and Minister of Finance Peter Turnquest, for his part, expressed his desire to help “improve the lives” of the Abaco and Grand Bahama families devastated by Hurricane Dorian.

“First of all, we pray that there [are] no more storms,” said Turnquest.

“We’ve gone through a tremendous, horrendous, traumatic event that has [led to] long-term consequences for the country and it’s going to be a long road to recovery.”

He added: “The first order, obviously, is to put back those institutions that will facilitate residents coming back and being able to access the services that they need – the police, the healthcare, the financial institutions.

“Then we will see how we can assist them, the best we can, to get back into their homes.”

Between now and June is an incredibly tight timeline so there are no guarantees as to how fast any of what Turnquest purported will take place. However, we certainly hope the government is ready to hit the ground running.

So far, we seem to have been at a lull as it relates to the government’s efforts post-Dorian. Certainly, some of the work being done doesn’t make it to the headlines, but the fact we’ve been recycling the same bits of information for months since the storm gives little comfort to observers within and outside the country that we are any closer to being in a better position to handle another superstorm.

Nonetheless, all government officials - at least publicly - present themselves as confident with our post-hurricane management. However, there continues to be whispers of members of the FNM being very critical of the government’s handling of the storm – a sentiment widely shared by Bahamians throughout the country.

Such agitation has continually been met with a contemptuous refrain – “Look at Puerto Rico. Look at New Orleans after Hurricane Katrina. Look how long they took get back to normalcy.”

No one doubts recovery is going to take some time. However, many are concerned by what hasn’t happened as yet, as well as this idea we should be using Katrina and Maria as benchmarks for how we get back to normal.

Both storms could not be worse examples of the US response to a disaster.

The Cato Institute – a public policy organisation and think tank – litigated the fallout from Hurricane Katrina in a 2015 study and found that among the failings of the government were its lack of disaster preparedness, failure to learn from its past mistakes, supply issues and general confusion over stakeholder roles in the response plan. Ironically, the same played a role, to some degree or another, in our handling of Hurricane Dorian.

Whether it be the government’s failure to produce NEMA’s disaster preparedness plan prior to Hurricane Dorian, not ensuring shelters were built to code to withstand storm conditions, or its failure to plan for the logistical issues of getting relief items to the affected areas ahead of time.

Notwithstanding the fact we have never experienced anything of this magnitude - and for that reason there has been a little more understanding given to the government - there is much we need to see happen within the next six months.

Rather than looking at how disaster preparedness has been done badly, we should be looking at which countries do it well and try to see what we can learn from the international community.

There is perhaps no better example than Japan – a country that has experienced its fair share of natural disasters, leading it to become the gold standard in disaster preparedness and response management. After Hurricane Katrina caused $100bn in property damage and took the lives of 1,800 people, Japan was eager to lean on the legacy of its own devastation by way of natural disasters and offered to advise the US. Not stopping there, Japan has continued to show itself as a great partner to other nations, having been one of the first countries to send relief items to The Bahamas after Hurricane Dorian.

Hopefully, as the government shows outward confidence, some of that can be instilled in the Bahamian people as this year’s hurricane season closes in. With Japan already expressing interest in assisting The Bahamas, we should take this a step further and invite a delegation of policy makers, engineers and scientists to share with us the knowledge gained from their country’s struggles with natural disasters.

Additionally, there has to be a massive public education and communication exercise on disaster preparedness for families. After our brothers and sisters have lost so much, it has to be the government’s top priority to launch such an initiative well in advance of the hurricane season.

Though there are frustrations with the government’s handling of the storm, the general climate in the country is one of understanding that Hurricane Dorian was a first for many of us.

However, the government’s tendency to let items on their agenda grow cold will be political suicide if their words don’t turn into action very soon.

They won’t have the luxury of not being prepared twice.

'Bend or break',and like trump - ping had the power to do it but not the insight to understand the far reaching effects. Now the red chinese are ready to sell to us (paid for by the few that pay our required taxes) to counteract a death sentence for us, but an opportunity for the yanks or chinese to mop up, buy, and commit business takeover of our entire country. Who sees the danger? Look at the proposed 51st state. Puerto Rico with the yanks. I trust none of them, and I will only look after us - b us, I don't necessarily mean you - you have to get smart, aware and figure it out!

They should all be ashamed especially the former Deacon for comparing a small area with very little people to countries with millions of people. They seem to view the Bahamian people as fools.

They have done nothing for Ragged Island. So they will talk and spin forever. The Grand Bahama Airport is still not open to international flights. and Bahamas Air. could not travel to the USA and still they talk.

They can not blame the former Government for these problems.

Tic-Toc-Tic-Toc-Tic-Toc.......another June 1st to November 30th season will soon be here and we all know what that stands to bring.