Insight: Trump's Raised The Stakes Through Iranian's Assassination - What Happens Next? 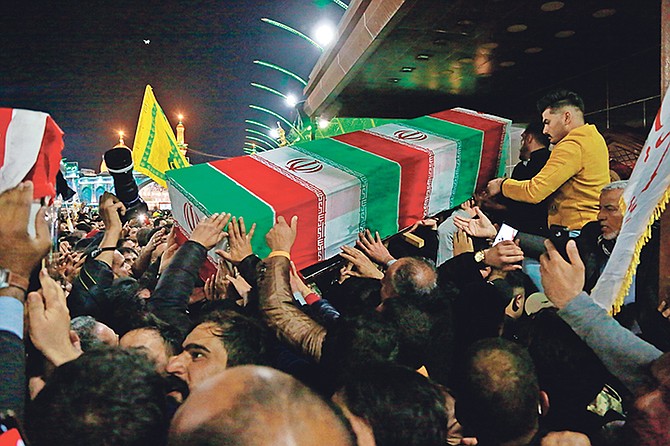 The US men’s soccer team was supposed to begin a three-week winter training regimen yesterday at an impressive facility in Doha, Qatar, where the men’s World Cup is scheduled to be held in 2022. The trip was abruptly cancelled last Friday. This was one of the first announced consequences of the American decision to kill Iranian Major General Qasem Soleimani in a drone strike on a convoy in Baghdad. It certainly won’t be the last.

Politicians and observers all over the world sounded the alarm. This dramatic escalation of the long-simmering 40-year animosity between the US and its chief Middle East antagonist raised fears everywhere that a broader war would result.

Well, maybe not everywhere. It’s not hard to imagine that some strategists in Moscow and Beijing may see advantages for them after another American adventure from which it is difficult to see the US emerging in a stronger position.

But for most everyone else, yet another broader Mideast conflict would mean economic disruption and political uncertainty that no one wants.

“His (Soleimani’s) work and path will not cease, and severe revenge awaits those criminals who have tainted their filthy hands with his blood and the blood of other martyrs.”

Iran’s Defence Minister added his country would deliver a “crushing response” against the Americans. The US is once again described as The Great Satan in public Iranian discourse.

American President Donald Trump, who ordered the successful “termination” of Soleimani, spoke to reporters the next day.

“Last night,” he said, “at my direction, the United States military successfully executed a flawless precision strike that killed the number-one terrorist anywhere in the world, Qasem Soleimani.

“Soleimani was plotting imminent and sinister attacks on American diplomats and military personnel, but we caught him in the act and terminated him.

“Soleimani has been perpetrating acts of terror to destabilize the Middle East for the last 20 years. What the United States did yesterday should have been done long ago. A lot of lives would have been saved.

“We took action last night to stop a war. We did not take action to start a war. If Americans anywhere are threatened, I am ready and prepared to take whatever action is necessary. And that, in particular, refers to Iran.”

Speaking later to Fox News host Sean Hannity, Secretary of State Mike Pompeo said “we found an opportunity and we delivered. We took this guy who you described pretty accurately as one of the worst terrorists ever to walk the face of the planet, and we took him off the battlefield.

“We’re not going to appease any longer. We’re going to take on this challenge.

“We can’t talk much about the details but suffice it to say the American people can know that the decision that President Trump made to take Qasem Soleimani down saved American lives.”

A subsequent State Department briefing featuring three senior officials dealing with Mideast affairs turned quickly rancorous. Like the President and Pompeo, the officials were reluctant to share details of the intelligence that led Trump to conclude that assassinating Soleimani now was of urgent priority.

The senior officials reacted defensively and defended the President’s action aggressively and almost caustically at times. Comparisons with the bogus 2003 intelligence supposedly confirming the presence of weapons of mass destruction in Iraq were emphatically, if vaguely, dismissed.

This all sets the stage for a high-stakes domestic political debate in Washington which is likely to continue for months. Republicans will probably all fall in line behind Trump eventually, while some will whisper their concerns about the President’s impulsiveness to friendly reporters, as they do now.

Democrats, as always feeling vulnerable to the charge of being soft on foreign menaces, will not react unilaterally. Centrist candidates like Joe Biden will likely equivocate, while left-leaning Bernie Sanders and Elizabeth Warren will fulminate loudly against Trump’s action.

But the world beyond the US will continue to react in its own way, and the American President and his team won’t like much of it. Pompeo is already on the record as feeling disappointed in the UK, France and Germany for their lack of enthusiastic support, despite the fact no prior notice was given to them of the attack on Soleimani.

Murmurs will grow louder from Western Europe, which still supported the Iran Nuclear Deal before the Iranians abrogated it yesterday, and strongly criticized Trump’s unilateral withdrawal from the pact a couple of years ago. Oil through the strategic Straits of Hormuz bordering Iran means much more to Europe than to the US, so as usual, where nations stand depends on where they sit geographically.

Meantime, as the Iranian government uses Soleimani’s death as a rallying cry to deflect attention from the domestic economic hardships inflicted by American and western sanctions, the Iranian general’s death does appear to have evoked sincere grief in Iran and elsewhere in the region.

But however the Iranian general was perceived in the Middle East, his death by remote control will do little to dispel the widespread regional belief that the Americans regard the Arab and Muslim nations of the region with haughty and ignorant disdain.

The Iraqi parliament voted yesterday to ask American military forces presently in Iraq to leave. The vote, with Iran-leaning Shia members unanimously in favour and rival Sunnis largely absent, is expected to be signed by Iraq’s President. It will be interesting to see how this narrative unfolds, but a US troop departure would open yet another power vacuum for Iranians and their proxies to fill.

Back home in the US, Trump is sure to benefit from this massive foreign distraction as the Senate (last week) and the House of Representatives (tomorrow) return to town after their Christmas recess.

While his impeachment remains stalled over important but procedural wrangles on how the forthcoming Senate trial of the President will be conducted, the House Judiciary Committee and others will be continuing to gather damning evidence against him in the matter of extorting Ukraine for his own political gain.

Out in southern California, there are more Iranians in the Los Angeles area than anywhere else in the world outside Iran. Locals sometimes refer to part of the megalopolis as Tehrangeles. Iranians are influential there like the Cuban, Venezuelan and other exile communities are in South Florida.

These Iranian exiles are outspoken on issues affecting their homeland. Perhaps speaking for many of them, the director of the Department of Iranian Diaspora Studies at San Francisco State University talked over the weekend to reporters.

“You can be critical and have feelings of disdain for a regime that murders its own people, and still believe that war isn’t going to be any kind of solution,” she said.