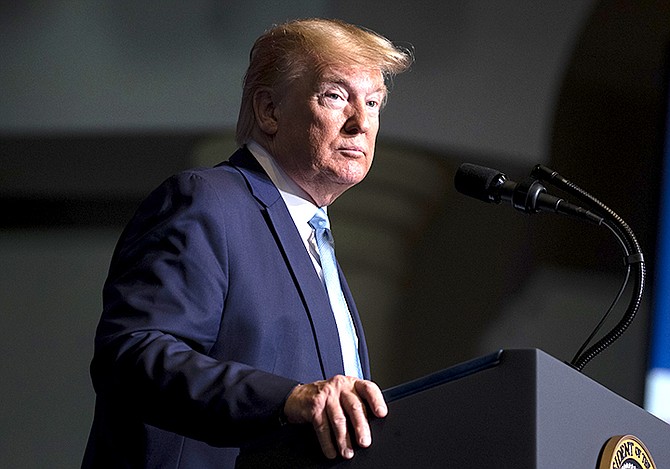 Trump's strike has shaken the world.

It is surely no exaggeration to say the sudden horror of last week’s killing by a US drone strike of Major General Qasem Soleimani, Iran’s top military commander and one of its most influential political figures, has shaken the world. It has escalated the simmering dispute between the two countries - going back at least to the 1979 US embassy hostage crisis in Teheran - to a point of extreme peril, with people now openly talking about the possibility of a new global conflict.

Revenge by Iran is inevitable, but what is even more concerning is President Trump’s new threat to hit back hard with military action against any retaliation by the Iranians. This sort of tit for tat action could lead to a major war in the unstable Middle East which many predict could all too easily spread around the world.

Most observers are not close enough to the subject to be able to take an informed view on the crisis apart from a likely knee jerk reaction that the Americans’ action amounts to irresponsible madness and is perilous beyond belief. They may also ask how such action can be justified and wonder about its legitimacy in international law, in particular whether it was proportionate in the face of any Iranian threat or provocation.

On the other hand, President Trump has claimed it was an act of self-defence following earlier Iranian attacks on American and other assets - including being a state sponsor of terrorism and, recently, shooting down an unmanned drone, an attack on Saudi oil installations and seizing commercial shipping - culminating in an assault last week on the US embassy in Baghdad. The US has also maintained its action was justified in order to prevent an imminent Iranian attack as a part of their plotting against US interests.

This incident is dominating the international news, so the facts do not bear repetition. But what has not been explained properly so far is the disagreement between the US and European countries, as well as other signatories like China and Russia, in connection with the 2015 Iran nuclear deal known as the Joint Comprehensive Plan of Action (JCPOA).

For some time, the Americans have been pursuing what has been described as an aggressive containment and isolation of Iran. Since Mr Trump’s withdrawal from the JCPOA in 2018 (characteristically calling it the worst deal ever), the US has been applying maximum pressure including harsh economic sanctions. The deal had imposed strict limits on Iran’s development of a nuclear programme in return for sanctions relief, and European countries blamed what they described as US efforts to strangle Iran economically for rising tensions in the Persian Gulf.

It seems European nations wanted to safeguard the nuclear deal and use a similar model of multilateral diplomacy with Iran in other areas. However, Iran has been gradually distancing itself from the deal - partly because of alleged European failure to meet trade commitments - and it is now almost certain the JCPOA will fall apart.

Secretary of State Mike Pompeo’s claim during the last few days to have spoken to his European counterparts in a spirit of cooperation is slightly bogus because, reportedly, there was no prior consultation with anyone or even advance warning.

It is also interesting that he has praised the reaction of Gulf States like Saudi Arabia and the United Arab Emirates while expressing disappointment about the so-called apprehensive European response calling for de-escalation of the crisis.

Perhaps, after all, the US’s tough approach since withdrawing from the JCPOA will ultimately be effective. But it is clear its latest action will unleash a serious reaction, put allied interests in the region at severe risk - as well as the fear of Iranian reprisals in European capitals - and place a strain on trans-Atlantic relations. It could also lead to the ejection of US troops from Iraq, leaving that country more vulnerable to terrorism.

Meanwhile, the assassination has gone down well in parts of the US. So, Mr Trump will have already gained politically in comparison, for example, with Hillary Clinton’s supposed failure as Secretary of State to protect American lives and property at the time of the Benghazi attacks in 2012.

Nevertheless, with the US on the brink of stumbling into a war, the rest of us can only hope that wiser heads will prevail from now on so that this crisis does not become worse through misjudgement or miscalculation resulting in potentially catastrophic military confrontation. It is now clear the US-led invasion of Iraq in 2003 was an utter disaster. Surely, nothing comparable will be seriously contemplated involving Iran.

Until recently on the ‘One America News’ channel, there has been relatively little US television coverage of the unprecedented bush fire crisis now happening in Australia. In a country accustomed to dealing with bush fires that are a regular feature at this time of year, many have been raging out of control for the last three or four months. We are told this is mainly because of hotter and drier weather conditions and an extended drought. The south eastern states of New South Wales and Victoria have suffered the worst, but it has become clear the whole nation is being affected indirectly.

This is now being termed a national disaster, and it is heart-rending to watch the television coverage as the conditions worsen. The figures are horrifying. Since September, 24 people have lost their lives as a result of the fires, more than 1,200 homes have been destroyed, millions of hectares of land have been scorched and there has been a huge loss of animals and other wildlife, including kangaroos and koalas that are famously indigenous to Australia.

The situation has become so bad people have been forced to take refuge on beaches to escape the flames and are being picked up by boat. It has been described as hell on earth, but the experts are saying the worst is yet to come with a new heatwave expected and little chance of sufficient rain to make much difference so that the crisis could last for months.

Temperatures have surpassed 40 degrees Celsius (104 degrees Fahrenheit) and high winds have fanned the flames. These have turned the sky red and, and a thick wall of smoke has partly drifted across the Tasman Sea as far as New Zealand, more than a thousand miles away. Meteorologists say that an unusual climate system originating in the Indian Ocean called ‘‘a dipole” has produced these historically high temperatures.

Amid all this horror, Prime Minister Scott Morrison has been heavily criticised for his government’s handling of a crisis which has turned into a major catastrophe. Not only has he been chided personally for taking a family holiday in Hawaii early on in the crisis, but he has been accused of being openly disdainful and not sufficiently caring in dealing with those in distress.

What seems to have angered people even more is his government’s attitude to climate change and to Australia’s commitments under the 2015 Paris Agreement. Critics say these are not being taken seriously as Australia’s carbon emissions remain far too high, with the country continuing to rely heavily on its domestic coal industry and its standing as a major coal exporter.

In the eyes of most, there is a clear and indisputable link between the current bush fires that are the worst in living memory and the exceptional heat and dry conditions that have increased the fire danger and that this has been partly brought about by global warming. Reportedly, this linkage has been acknowledged by the nation’s Bureau of Meteorology.

Many claim the situation will not improve unless, as an essential first step, the politicians formally accept the connection exists and start to address more vigorously the issue of climate change and global warming.

As the nightmare of devastation and despair continues, other countries are offering practical assistance. Some commentators in Australia are already expressing concern about the long term survival of the nation itself. But, given the well-known resilience of Australians, that sounds extreme and most people are hoping and praying for some improvement of conditions despite the predictions of little respite in the weeks and months ahead.

The honours system is one of Britain’s proudest traditions. All concerned are confident it is conducted with the utmost honesty and integrity and this is widely accepted both at the official and personal level, as it surely is here in The Bahamas as well. However, there will always be unhappy people who, because of envy or jealousy, will claim that one or other honoree is more or less deserving than someone else. But that is invariably limited to disgruntled individuals.

Against this background, it was surprising to read of official critical remarks attributed to the Opposition about the award of a knighthood to Godfrey Kelly, pictured; and, at the same time, in relation to the United Bahamian Party which was in power in The Bahamas, under a colonial Governor, from 1956 to 1967.

Since I am interested in Bahamian history, I have read all I can find about the UBP. An informative and reliable source I have come across is a book entitled “A Modern Perspective of the UBP” by Fred Sturrup and published in 2008. This is reputed to be an objective and authoritative work and chronicles the achievements of the UBP which had been demonised by some since its defeat in 1967. In the prologue, the author states “Until its defeat……the UBP engineered great prosperity in the land. It ushered in a powerful tourist thrust that became a landmark industry in the country, the region and indeed the wider world”. He also quotes - tellingly perhaps - recent positive remarks about the UBP by former Governor General Arthur Hanna who he describes as having been “a thorn in its side”.

In the body of the book, the author devotes an entire chapter to Godfrey Kelly’s work as a former Minister of Education and he calls him the architect of education in the modern Bahamas. There is no space to elaborate on that today, but the detail is impressive - and it leaves me genuinely puzzled about the Opposition’s remarks which seem to be at variance with the facts.

If one adds to Godfrey Kelly’s immense influence in the field of education - which is well documented - his achievements and impressive contribution to his country over many years as a long-standing member of the House of Assembly representing Cat Island and in the fields of sailing and the law among others, there can be no doubt his knighthood is not only thoroughly deserved but is also long overdue.

Godfrey Kelly's self-serving grandiose sense of entitlement really says all there is to say about him.