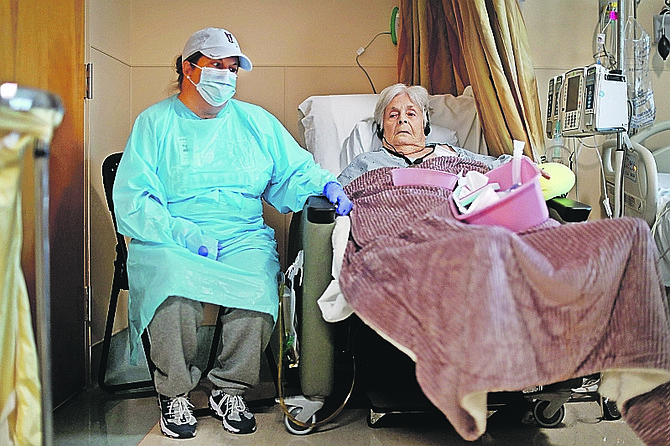 VIRGINIA Mosvold held on to a refrigerator for two days, bobbing up and down in water that nearly covered her face after Hurricane Dorian flooded her family’s home in Grand Bahama in early September.

The 85-year-old’s daughter and son-in-law had escaped to the home’s attic but could not lift the elderly woman there, and at one point, feared she had died.

Her daughter Sissel Johnson described the experience as a total “nightmare”. She recounted watching the rising sea water enter their home, almost submerging her mother under nearly three metres of water.

“It was the worst nightmare you can imagine,” Mrs Johnson told Times Colonist, a Canadian newspaper. “I just kept saying: ‘Lord, please don’t let her drown in this water.’”

The 85-year-old was living with her daughter and son-in law – George Johnson — at their home in Freeport when the monstrous storm made landfall last year. It was a storm, Mr Johnson said, unlike anything that they had ever experienced.

“I actually saw the water coming from a distance, and it wasn’t coming like a slow approach. It was coming like a tsunami wave,” he told Times Colonist.  “Every second, it was getting closer and closer. And by the time I screamed for my wife to come out of the bedroom, it was already at the door.”

Knowing they had to protect Mrs Mosvold from the deadly storm, Mr Johnson made many efforts to keep her safe.

One such effort included creating a makeshift harness out of television cables and tying Mrs Mosvold to the rafters. “I know if I didn’t do it, she would be out in the ocean and get drifted away and never seen again,” he said.

Those efforts did not stop there, however, as Mr Johnson continued to keep her safe. After punching a hole in the attic’s drywall for him and his wife to escape to higher ground, Mr Johnson said he attempted to bring Mrs Mosvold into the attic to join them.

But, the effort proved too painful for the 85-year-old as the cables dug into her skin. But, as water levels rose in their home, Mr Johnson tightened the cables to keep Mrs Mosvold above surface.

The next morning, the Johnsons’ worst fears surfaced when they could not locate her in the harness.

“I thought right then that she was gone. Then I heard her call my name,” he said.

Having taken the harness off, Mrs Mosvold was found clinging to a floating refrigerator.

She had spent nearly two days in the water, which had led to a rather severe infection in her leg, extending from her toes to her knees.

Meanwhile, the Johnsons remained in the attic, surviving on food secured from the refrigerator.

After most of the water had receded from their home, Mr Johnson decided to leave the attic and seek help for him and his family.

In fact, he even painted the words ‘help’ outside his home using cement siding.

But, it wasn’t until three days after the storm that help actually came. A vehicle had finally made its way to the property.

“They said: ‘We came to rescue you guys,’ and that’s when I basically just fell to the ground,” Mr Johnson said.

Two Jack Russell terriers survived with the couple in the attic, and another three dogs and a cat swam around the house before finding safety on a floating mattress in a guest bedroom, it was reported.

Several days after being rescued, Mrs Mosvold and her daughter were airlifted to a hospital in Florida for medical attention.

Since then, Mrs Mosvold has been living in Victoria, British Colombia —her hometown before she moved to The Bahamas — with her daughter and son-in-law. She has recovered from most of her injuries.

Having lost everything in the storm, including their farm, the family has received much help from relatives and friends.

A GoFundMe page set up on their behalf has secured over $23,000.

Having been encouraged to return home, Mr Johnson said they are trying to heal from the whole ordeal.

She is lucky to have been one of the survivors!