FACE TO FACE: 'Softly' Robins - a giant of a man and a legend to many 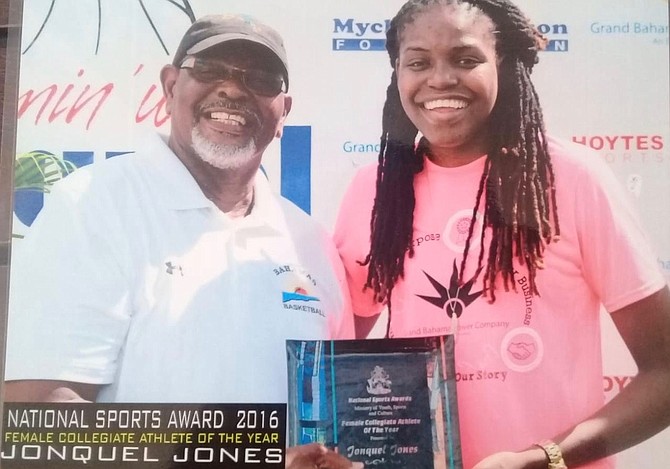 When we are children, the people who made a great impact always seemed larger than life. As we become adults, we realise they are ordinary, relatable people. It’s just that they do extraordinary things. Charles “Softly” Robins is one of them. He is the father of one of my best friends in high school, Charlis Robins.

Softly, or Coach Softly, as he is affectionately called, is a tall, giant of a man. Kind in spirit, with a big, wide grin and always filled with good advice. He and my father, Allan Ingraham are alike in these ways. Both being tall, statuesque, handsome gentlemen who had their fair share of the limelight in their younger days, and are still adored today. They were both basketball stars here in The Bahamas during a time when night league basketball was all the rave. Hot competitions and exciting games resulted in large turnouts and a charged atmosphere as people attended games religiously.

The main two rival teams were the Kernels, which Softly played for, and the Cougars, which my father played for. This did not affect the good camaraderie and friendship that people like he and my dad established with one another during the heyday of basketball night league games in The Bahamas.

Softly was born in Bailey Town, Bimini to Charles and Maude Robins. Maude hails from Grand Bahama and as a child, she spent many summers in Bimini with her aunt. This is how Charles, a carpenter, set his sight on the lovely Maude whom he eventually married. They had 17 children together, and 12 survived. Little Charles the third was their ninth child.

Growing up in Bailey Town, baseball was the order of the day on the island. The Bimini Braves were a baseball team that islanders could be proud of. Kids spent their afternoons playing the sport and the fact that the shores of the United States are a mere 50 miles away, many young Biminites had the opportunity to play baseball in Florida during the summer months.

“I did not excel in baseball… and I knew it from the jump,” said Softly, who went on to become one of the best athletes the island has produced.

The youngsters on Bimini also had the opportunity to learn how to box. Professional boxers Yama Bahama and Gormio Brennen were living in the United States, but they would come home to Bimini every summer and host clinics to pass on their skills to the next generation.

In those days, Bimini had no high school. The Catholic and Anglican priests on the island would provide scholarships to their high schools in Nassau for students whose grades met the mark. So by 1967, Softly left Bimini on a scholarship to Aquinas College where Andrew Curry was Principal. A year later, Principal Curry recruited basketball coach Jerry Harper of Springfield, Massachusetts to help augment the schools sporting programme.

“We were just learning how to play basketball,” Softly recalls, and he flourished under coach Harper.

He was living with his aunt on Strachan’s corner, and young men who lived in the East Street area would practice basketball on Deveaux Street, at Our Lady’s Parish and School grounds.

“If you had any kind of talent, the boys in the area would want you to play on their team,” he said.

“The younger ones would play for St Bernard’s or Rodger’s Sports Shop. Then as you got older, you could play for the Kentucky Kernels. The Kernels and the (Beck’s) Cougars which your dad played for had good rivalry back then. Your dad, those practiced on the Priory (St Joseph’s Parish and School grounds on Boyd Road) off Nassau Street.”

He earned the name Softly during one of these dynamic games. The crowd was roaring as Softly was tearing up the court, playing well and making great scores. It was Basil Sands’ mother who was spectating one of the games who said that he was killing the other players so much that he was “killing them softly”. That song has just recently come out and it was a hit. Mrs Sands said the spectators should call him “Softly”, and the name stuck with him for life.

“Phil Poitier and Anthony Bostwick really taught me the game of basketball. And those guys looked out for you. They made sure your homework was done before you could play, because the game wasn’t going to end until about nine o’clock. We were committed. It isn’t like today where you call a guy off the bench and he has his phone in his hand, and he has to finish sending a text before he gets on the court.

“Basketball back in the day was really a way out to go to college. If you were determined, you could have gotten a scholarship. Athletes like Sterling Quant, Bookie Johnson, Keith Smith, Fred “Papa” Smith, Phil Poitier, and Sharon Storr… most of the guys got their scholarship through basketball at that time. All you had to do in the afternoon is be committed and play basketball.”

Coach Jerry Harper sent the young Charles, Fred Laing and Sterling Symonette to basketball camps in the US in the summer. He had the opportunity to attend many camps including one in the Pocono Mountains of Pennsylvania, and Ted Williams basketball camp in Massachusetts. Eventually, Softly attended college at Western New England College in Springfield, Massachusetts where he studied sociology.

However, his basketball prowess was such that he had the opportunity to go to bigger colleges. He could have attended Davidson College, where NBA star Stephen Curry is an alumni, and he also had an offer to attend Boston College. But coming from such a tiny island, he felt overwhelmed at the size of the ball stars at these schools, and also the size of the student population. Davidson at the time, had some 20,000 students. He had commented that he felt the schools had more students that the entire New Providence.

Softly shined at his college of choice. He made “All American” mention, and he was the most outstanding player in the school in 1971. Today, Softly literally has a house full of trophies. He won them not only during his university tenure, but also playing night league basketball. He has almost every award ever offered in the sport nationally.

This February 6, Softly will celebrate his 70th birthday with friends and family at his home in Freeport, Grand Bahama. He spent two years in Nassau after graduating college, teaching at his Alma Mater Aquinas, and he continued playing for the Kernels. Despite all his success in Nassau, he and his Bimini childhood buddies Dr Larry Bain and Zach Smith together made the decision to make Freeport their home. Softly knew that Grand Bahama could use help in basketball, and he was determined to make a difference. There, Softly met coach Gladstone “Moon” McPhee, with whom he established a great relationship. Coach McPhee encouraged Softly to start a basketball camp for the kids. He was in Freeport teaching and coaching at St Vincent De Paul school.

Today, the Charles Softly Robins basketball camp is the longest running basketball camp in the entire Bahamas, still in operation today. He is considered “Papa” by hundreds of Grand Bahamians and has given back so much. He has coached the National Junior and Senior men’s basketball teams. He encourages youngsters to reach for the stars and work hard.

“Look at Buddy Hield,” he said, “And work twice as hard as NBA star Buddy Heild – out of Grand Bahama.”

“Work twice as hard as Jonquel Jones – WNBA star out of Grand Bahama. Push harder than NBA star Michael “Sweetbells” Thompson, and Division 1 coach Youlette McPhee. Look at all the superstars that The Bahamas has produced in basketball, and set your goal high. Learning basketball is like learning the game of life. The door is open and the world is watching. Obey your coach, stay committed study hard and make up your mind to be the best.”

Charles “Softly” Robins is currently retired and enjoying life with his wife, Driskel. He is looking forward to his 42nd annual basketball camp. He is father to Charles Daniel IV and Charlis Robins. He has two grandchildren, Charles Daniel V and Keitho Elon Daniel.