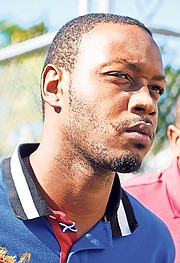 A 26-year-old man was remanded in custody for seven weeks to await his sentencing for being caught with a prohibited assault rifle and 30 rounds of illegal ammunition earlier this week.

Chief Magistrate Joyann Ferguson-Pratt said Levan Cliff Bannister will be sentenced on March 10 for admitting to being caught in possession of the illegal items on January 14.

Bannister would have been sentenced yesterday, but his attorney Dion Smith requested an adjournment so he could be furnished with a report from the Department of Social Services, which, he said, would allow him to make a more “detailed” plea in mitigation on his client’s behalf.

It came after Bannister admitted to being caught with a Spikes tactical AR-15 assault rifle, one .223 magazine and 30 rounds of .223 ammunition that he was planning to distribute to others.

According to the facts read by the prosecutor, Samantha Miah, around 3.30am on Tuesday, the police control room issued a BOLO (be on the lookout) for the occupants of a white Nissan Cube who had fired gunshots in the Nassau Village area.

A team of officers, while in the area of Bay Lily Drive in Seabreeze, observed the vehicle travelling east on Seabreeze Lane. The officers pursued the vehicle, using their car’s fog horn and siren to get the other car to stop. The Nissan Cube eventually came to a stop at the intersection of Rico Street and Pepe Avenue.

Bannister, who was driving the car, was told to get out so that he and the car could be searched for dangerous drugs and firearms. The search, which was conducted in Bannister’s presence, yielded a black and green AR-15 assault rifle along with one .223 magazine containing 30 live rounds of ammunition. The items were found on the back seat.

As a result, Bannister was cautioned and arrested.

While under caution, Bannister told the officers that he got the gun from a “white boy” named Dave from West Palm Beach, Florida while the pair were at Cabbage Beach, Paradise Island at around 5.30pm on Monday. As a result, Bannister was taken to the East Street South police station for further investigation.

Later, while at the Central Detective Unit, a senior officer conducted a record of interview of Bannister in Mr Smith’s presence. During the interview, Bannister would only say “no comment” to all of the questions asked.

He was ultimately charged with the three offences.

He returns to court today for a fixture hearing before Senior Magistrate Derence Rolle-Davis.