Insight: Setting The Ground Rules For A Marijuana Industry 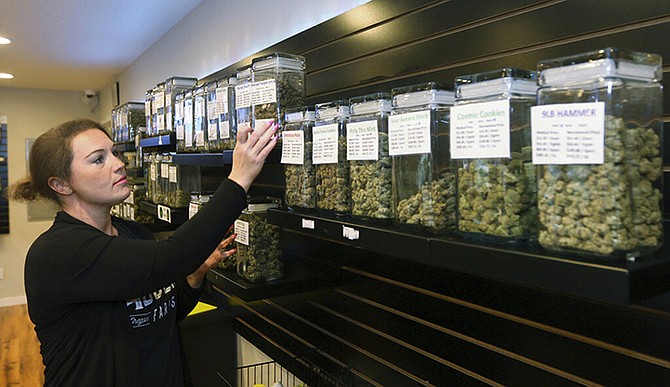 The manager of a retail marijuana dispensary in Oregon stocks the shelves.

THE recent leak of the Bahamas National Commission on Marijuana’s preliminary report has brought the topic of marijuana decriminalisation back to the fore. With Prime Minister Minnis’ decision to transfer the commission from the Ministry of Health to the Office of The Prime Minister, now we wait for the next steps. Of course, as marijuana continues to be a polarised topic across generations, Bahamians, whether for or against decriminalisation, know that such a policy shift will completely alter The Bahamas. At this time, there is no timeline for the publication of the final report. However, that has not prevented speculation on what the Bahamian marijuana industry would look like.

If we are to take into account the vision of commission co-chair Quin McCartney, The Bahamas’ marijuana industry would probably look a lot like Jamaica’s. The island nation, seen as a cultural mecca for the plant, has garnered some success since its legalisation in 2015. As one of Canada’s main suppliers of the crop, Jamaica has high hopes in cashing in on what is projected to be a $50bn industry in the next decade.

Certainly, if we are seeking to model ourselves after any Caribbean state, Jamaica fits the bill. With its iconic branding and association with marijuana making it a prime market as well as its potential to promote itself as a medical marijuana tourism hub, there are many parallels The Bahamas can learn from to position itself as another prime supplier to North American markets.

Still, as it serves as the guinea pig for other Caribbean countries, Jamaica’s marijuana industry has not prospered without obstacles. Particularly, creating an open market industry while safeguarding smaller growers and Rastafarians - who have long used the plant as a religious sacrament - are still hoops the island nation attempts to work through.

With cultural similarities, Jamaica does – as Mr McCartney believes – create a good launching pad for The Bahamas.

That said, developing an entirely new industry against the backdrop of intensely conservative religious views will be no easy feat. Among the considerations are overhauling social perceptions, mitigating barriers to entry, industry regulation and what should be on all of our minds just four months removed from Hurricane Dorian – climate change.

Many opinions on the herb are rooted in misinformation promulgated by American tabloids dating back to the 1930s – something we have discussed in this column previously. Surely, we can recall that what began as a prejudice-driven campaign to persuade the US government to enforce harsher immigration policies on Mexican immigrants who smoked the plant, at a time when it was primarily used in America for medicinal purposes, marijuana was outlawed by the Marijuana Tax Act of 1937 – eliminating all use outside of medicinal and industrial purposes – before it was later classified as a Schedule 1 dangerous drug, per the Controlled Substances Act of 1970.

And while, today, 29 US states have legalised medical marijuana since 1996 many Bahamians still associate the herb with the socially undesirable, criminal and those of lower class – all offshoots on the anti-immigrant agenda that was initially spread by American media.

Such warped views have continued to leave a large portion of the populace ignorant of marijuana’s benefits and have led to the disenfranchisement of youth that have had their criminal records blemished for possession of small amounts of the substance and religious persecution of the Rastafarian community.

As the world’s views on marijuana begin to come full circle, public education - in the form of an unlearning what we’ve come to understand about marijuana as a society - will be essential if politicians are going to drive our efforts towards decriminalisation, and eventual legalisation.

Another thing we must consider is the need to promote equitable participation in the industry. Like Jamaica, The Bahamas, should ensure Bahamians are majority owners of the industry. As we will likely become suppliers to North American distributors, foreigners should only be allowed to have minority interests in our marijuana industry. Additionally, as a precursor to licencing, prospective parties should be enforced to provide specialised training to Bahamians in all areas of expertise within the industry to minimise the need for expatriates within five years of being issued a licence.

Moreover, as we look at ensuring individuals at all levels of the economic spectrum can participate locally, we should consider how to remain true to open market principles, yet still look at how we prevent the elites from monopolising the space – an issue Jamaica also ran into. Similarly, The Bahamas can create its own version of Jamaica’s Alternative Development Programme which allows individuals with the expertise in growing marijuana to form consortiums and pay lesser fees for licences. This would, in essence, combat a marijuana black market, and prevent clandestine marijuana profits from escaping the public purse.

Additionally, taking the commission’s preliminary recommendation on allowing the Rastafarian community to form a consultative body a step further, they should also be allowed to form an entity at a discounted licence fee to become a supplier. As a group that has been perhaps the most persecuted for marijuana usage, giving them the chance to obtain an economic benefit should serve as a form of reparation for the years of oppression they’ve experienced.

Regulation will be one of the greatest challenges we face, as we will be required to make new laws and safeguard the nation’s youth from using marijuana before the legally mandated age. One of the biggest hurdles that has led Jamaica to revamping its interim regulations has been found in the inability of lifelong marijuana growers from entering the industry because of a difficulty in accessing capital.

With the US still hesitant to federally decriminalise marijuana, jurisdictions like ours that also depend on the financial services sector would obviously be timid about the prospects of a marijuana industry. Recent challenges the country has experienced with being blacklisted would make it incumbent on the government that strict policies are developed and followed to avoid further regulation from external agencies.

Certainly, a regulatory body – possibly building off what the commission has already accomplished – would need to be formed. Such a body should be composed of experts in policy, the law, marijuana’s medicinal benefits and economics.

Living in a hurricane belt presents a unique challenge for a low-lying country like The Bahamas with aspirations of growing marijuana to service a full-fledged industry. While many who see the vast possibilities of a Bahamian marijuana industry may be looking at islands like Andros as a hub because of its rich and sizeable arable land, its susceptibility to hurricanes may require us to give more thought to how marijuana should be grown in the country.

Whether we look at developing hurricane-proof hydroponic labs on strategically selected areas throughout the country will be up to the braintrust. However, what we cannot ignore is the stakes have changed and a move towards developing a marijuana industry must lead us to exercising great thinking into how it should be done.

Marijuana decriminalisation and legalisation is no longer a matter of if, but rather, only a matter of when. Thus, it would serve us best to begin furthering our understanding of what will make our country successful once we too become a player.

doc took the report from Dr: Sands because he wanted to be the one to announce the Findings. doc thinks this will make him look good. It may bring disgrace to him. There are enough young men from poor communities sitting around and not living up to their God ordained potentials.i

The first out of the mouths is how much money is in this drug. It is a vice just like gambling.

It is my hope that all will make the decision with God's help as to what is good for them. It is not good to be slaves to anything,