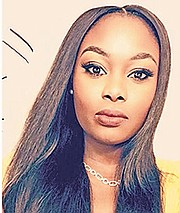 THE family of the woman who lost her life in a traffic fatality in Central Andros on Thursday say they are shocked by her unexpected death and believe she was taken too soon.

According to reports, shortly before 4pm, a woman identified by family members as 27-year-old Bajina Marshall was driving a blue Suzuki Swift in the vicinity of Davis Creek, Central Andros when she lost control of her vehicle and crashed into a utility pole and bushes.

Police said the victim sustained serious injuries and was taken to the Fresh Creek Community Clinic where she was pronounced dead.

Her father, Enoch Marshall, told The Tribune he was 25 minutes away from the site of the accident when he first received the news of his daughter’s tragic death.

“I can’t describe it,” he said. “Boy, it felt like all the blood just draw out of my body – all. Especially when I found out she was in a bad condition and that she was unconscious. I just began to pray asking the Lord to hold her and keep her. It wasn't a good feeling at all.”

Mr Marshall said the “closest thing” he could describe his daughter to was an angel. He insisted that she was a caring person who made an impact wherever she went.

The victim’s mother Jenevieve Marshall, also described her daughter as a people’s person who was extremely friendly.

“She was a person who liked to meet people,” she said. “She was kind and always affectionate. We’re still in shock (but) we’re getting there day by day. Time heals.”

According to her parents, Ms Marshall was a religious studies teacher at the Central Andros High.

The victim was also a member of the Nassau chapter of the Delta Sigma Theta sorority and was well known throughout her community.

“The Christian Council went down to the school (after her death) to pray with the students and teachers and encourage them,” her father added.

“The students were weeping. The whole school was weeping. We have gotten lots of love from all over. The community is going to be affected by her death.”

Tonya Marshall, the victim’s older sister, also told this newspaper she is struggling to come to terms with her sibling’s death.

“I’m still in shock,” she said between tears. “She was really well known because she was always travelling.

“I can’t even explain myself. As sisters, we always had a perfect relationship so I’m speechless right now and I'm starting to breakdown. She never felt like she reached the point where she had already accomplished all of her goals.

“She got all of her degrees, but she always wanted to do more. She told me she wanted to go back to school to do some more stuff. There was never an end to what she wanted to do in life and I feel like she has gone a little too soon. I’m still in shock.”

“I’ve spoken to a few of our family members and they are not taking it too good. I know it’s going to be another story because everybody is going to break down again.”

Since her death, there has been an outpouring of love and support on social media from those well acquainted with Ms Marshall.

The former religious studies teacher is remembered as a rare gem and role model by family, friends and colleagues.