Face To Face: Tony Keeps On Running - And Giving Back For The Success He’S Achieved 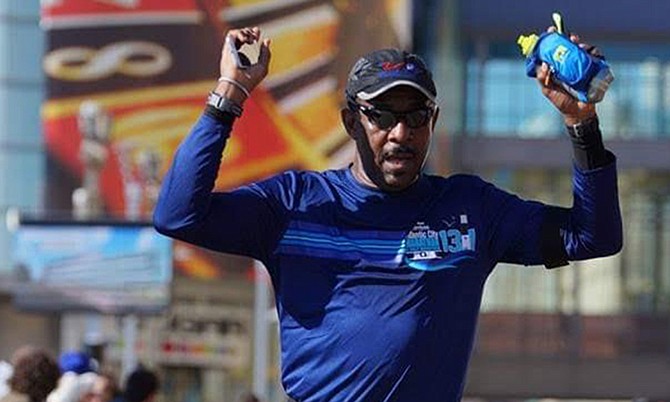 Imagine running for 26 miles – 42 kilometers. There’s a special place on the endurance list for the people who run this distance in marathons around the world. As I interviewed Anthony Longley for this week’s Face to Face, I was impressed by all of his achievements. He is the first Bahamian to ever serve as International Director in Toastmasters International and he is the first Bahamian to speak at the Million Dollar Round Table. He is a veteran in the insurance industry and a professional photographer. He achieved it all on a high school education.

He started from humble beginnings on West Street in Grant’s Town but has since travelled the globe motivating thousands of people along the way. It was when he told me he is a marathon runner who has competed in major races like the New York City and Toronto Marathons that I understood where his tenacity comes from.

The thrill of the marathon taught him a lot about his personal life as well. There was a time when Anthony was at a low point in his career. It was 1985. He was still a newlywed and was working at an insurance company, but he was simply not succeeding.

Anthony is honoured by the recently-held Hubert Edward’s Success Summit. He is presented with his award by Hubert Ewards (left) and Rodney Bain.

“There is a phase in running, where you get beyond the 15th mile and you hit a wall; sometimes even runners in their best condition hit the wall – well, I had hit the wall in insurance,” he explained.

“I just couldn’t get another sale… I lost it emotionally and psychologically and I quit.”

It was at that point that a relative of his in the insurance industry, Larry Mcphee, stuck by him and encouraged him for months. When Anthony wanted to give up on his dream, Larry held it for him and eventually convinced him to get back in the race. By 1986 he was back in stride and working with Larry as a sales representative at what was British American Insurance (now BAF Financial). Today, he is a 36-year veteran in the insurance industry and an Executive Financial Services Representative at Colina Insurance. Not only that… he is 58-years-old and still running, still chasing new hopes and dreams, proving he can do anything he sets his mind to.

Of his time at British American he said: “I will never forget what the manager there , Mr Keith Major said to me. He said, ‘All I want you to do is submit to my training, and I will deprogramme you from everything you have learned and reprogramme you for success’. The very next year, I qualified as a member of the Million Dollar Round Table (MDRT) and attended my first annual meeting.”

MDRT is an international organisation based in Park Ridge, Illinois and is one in which membership cannot be bought. It is the Premier Association of Financial Professionals. Anthony is also the first person from the Caribbean to serve on the management council which afforded him the opportunity to travel all over the world.

“I remember on one occasion we were travelling to Tokyo and I was able to view the invoice from that trip,” he said.

“It shocked me. It cost them thousands to fly me there by Business Class. I was hoping it wasn’t a mistake and they end up sending me to a seat near the lavatory at the back! I was like… ‘look at me, a little black boy from The Bahamas’. It’s not of my own doing, but by the Grace of God.”

Anthony, better known as “Tony”, also made history in Toastmasters International, a 350,000-member global organisation. He is the International Director for Region 8, which covers all of Florida, Georgia, Alabama, the Caribbean and Brazil. He is a “working ambassador” who meets with the Board to develop and implement policies and protocol. Toastmasters International is a worldwide non-profit educational organisation that empowers individuals to become more effective communicators and leaders.

But even being a communicator did not come easily for Anthony. He had a speech impediment that would have made it nearly impossible for him to one day, deliver motivational speeches at such a high level. Through discipline and determination - and putting aside his pride - he went from a shy presenter at home Club 1600 in Nassau to achieving the organisation’s highest educational and leadership designation, Distinguished Toastmaster. 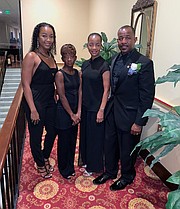 Anthony with his wife, Jackie, and daughters Antonia and Alissa.

Anthony also has great shoulders to stand on. He comes from a family of entrepreneurs and took great examples from men on his mother’s and father’s side. His father, retired policeman and building inspector Eustace Longley hailed from Lisbon Creek, Andros. Eustace’s father Jack was the most respected sloop builder of his era. Anthony’s mother, Joyce Lockhart owned a corner store at their homestead on West Street. Her father, Sheffield built that home that the young Tony grew up in with his siblings. It is 100-years-old and still standing, still being occupied by Lockhart family members today. Sheffield was a boat captain who was navigating the mail boat when, on a voyage to Turks Island, he met his bride Louise Frith and built the West Street abode.

Anthony wore the brown and tan uniform of his neighbourhood school William Sayle Primary. He spent most of his childhood years as a member of the Boy’s Brigade Band. As he grew, he went on to attend St Anne’s and then Jordan Prince William High Schools.

Three weeks out of high school, he got a job at Island Merchants where, with some basic training in photography, he developed a passion. He went on to work at John Bull while also working nights at Paradise Photography on Paradise Island. He and his coworkers Patrick Hanna and David Knowles would take pictures at the world famous Le Cabaret Theatre. They would head upstairs to the darkroom, develop those photos during the show and then head back down to the audience to pitch their sale, table by table. The trio are lifelong friends.

He is still passionate about photography and running, both availing lifelong friends and lessons to him. He met Bernard “BH” Hanna in 1987 when he joined Toastmasters. BH was a veteran long distance runner who was spearheading the formation of the Roadmaster’s Running Club. He was also inspired by Alpheus “Hawk” Finlayson and became one of the founding members of the club. He is still a financial member to this day, and looks forward to the challenge of completing marathons. He remembers one of the most difficult being running in Canada for the Niagara Falls Marathon in 15-degree weather – but he completed it.

“I consider myself blessed with fitness at my age… I only laugh when I see the youngsters trying to beat me,” he said with a chuckle.

Anthony with his siblings Gloria, Basil and Helen at church. He serves at St Matthews in public relations.

“I can beat any youngster on the road and when they try to catch me, I smoke ‘em out!”

The art of endurance to win a race was also an important lesson Anthony learned from his mother. He watched her perseverance in action as she built her house in South Beach over a 15-year period right out of her pocket without a mortgage. She would tend to the shop with her father in the day and at night, she would babysit at a hotel while studiously saving and joining Asue groups in order to build her own house.

“We had good examples and then we had it instilled in us at an early age to strive for excellence,” Anthony says of himself and his siblings.

None of them went to university out of high school, yet they all did well in their professional lives. Two of them went on to receive tertiary education as adults after they already had their own families. Anthony says their petite mother had a stern, strict hand and it helped to shape their character. He cherishes the support of his family; especially the support of his wife of 36 years, Jackie and their daughters Antonia and Alissa.

“People use it as an excuse that they did not go to college,” he said.

“You can educate yourself even outside of formal education. You have to learn from your experiences. Read a lot. Associate yourself with positive people and organisations. And, like in running, never give up.”

Anthony is now at the stage where giving back means much to him: “Don’t be selfish when you are successful. Nobody gets there on their own. Someone had to help you.”

“As one author said… we sit in the shade of a tree we did not plant, we are called to plant trees under whose shade we will not sit.”