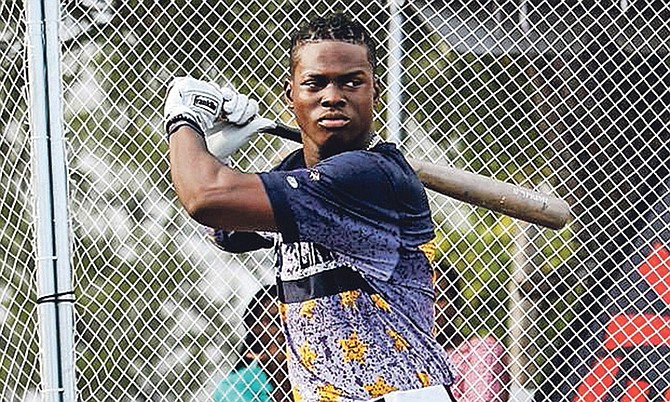 KRISTIAN Robinson was noticeably left off the Arizona Diamondbacks’ 60-man player pool for the upcoming Major League Baseball season, but the club’s No.1 overall prospect will still have an opportunity to train under team supervision.

When the MLB shut down all baseball activity in March due to the COVID-19 pandemic, Robinson remained in Arizona and thus will be allowed to continue to train at the Diamondbacks’ spring training facility when the season resumes, despite not being on the “taxi squad” eligible for the season.

Nick Piecoro, of the Arizona Republic, said a Diamondbacks spokesman elaborated on the 19-year-old outfielder’s status:

“Kristian isn’t on the list because he can work out at Salt River Fields without being on the list based on the fact that he couldn’t go home (to the Bahamas)” in the first place.

Robinson, along with Alek Thomas and Corbin Carroll, were listed by MLB Pipeline as No.7 among the top groups of minor league prospects.

With the official cancellation of the 2020 Minor League Baseball season, many franchises are using the 60-man player pools for the upcoming shortened MLB season as an opportunity to monitor and develop their elite prospects. As members of their teams’ respective 40-man rosters, Jazz Chisholm of the Miami Marlins and Lucius Fox of the Tampa Bay Rays were named to each team’s player pool of up to 60 players that can be used throughout the season. The 60 players will be invited to training camp and active rosters will include 30 players. After two weeks the roster will be reduced to 28 and after a period of two weeks, a final cut of 26 players.

Robinson, the No.1 prospect of the Diamondbacks, was also listed at No. 43 in MLB Pipeline’s Top 100. He rose 29 spots in the rankings from his position at No.72 at the end of the 2019 season. This came after a 16-spot advancement last year when he began the 2019 preseason ranked at No.88.

In August, he was called up to the Kane County Cougars, where he concluded the remainder of the season in the Class A Midwest League.

“Robinson is both a physical specimen -- listed at 6-foot-3, 190 pounds -- and an impressive athlete who shows the makings of having average or better tools across the board. He has the type of prodigious right-handed power that could one day make him one of the game’s more revered sluggers, and he already applies it during games from line-to-line.

“Robinson also shows feel to hit, with plate discipline and contact skills that stand out for his age and experience. That hitting ability is the reason why scouts are so bullish about Robinson’s power potential, and he stands to make a major jump in that department as he learns to consistently hit the ball in the air,” his profile analysis said.