New Cases A Concern For Some In Grand Bahama 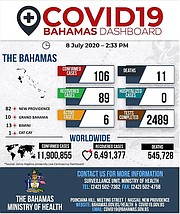 WITH two new COVID-19 cases emerging in Grand Bahama, residents on the island have mixed feelings on whether the country should shut its borders to the US, which has emerged as “a global hotspot” for coronavirus infections.

It is believed the island’s close proximity to Florida – a hot spot state – makes it vulnerable to a rise of new cases after this nation’s borders reopened to commercial international travel on July 1. Just yesterday, Florida recorded nearly 10,000 new COVID-19 cases.

The Tribune asked several residents how they felt concerning these new cases on the island.

Rev Glenroy Bethel, an outspoken civic leader, is concerned and believes that reopening the borders to international travel, particularly to and from the US, was a big mistake.

“We are so close to Florida and it is a hotspot. Why would you open the borders knowing that Bahamians will jump on the boat and head there and visitors would also come in?” asked Rev Bethel.

“At the end of the day, I did not think it was a good idea. I believe it should be shut down now mainly because for 54 days or so we were COVID free, and these (new) cases have just come about now that the borders were opened. So, the question is what are you doing?”

Rev Bethel, of Families for Justice, said that the infections happened so quickly, and fears it could put the island back in lockdown.

“We had no incidents (for nearly two months) before this. We need to close the border, shut it down now before the numbers start rising; we need to demand it,” he said.

A police officer, who did not want to be identified, suspects the new cases are the result of the opening of the borders.

“They should leave the border closed until August and we need to do more testing,” the officer said.

However, not everyone wants the borders closed. Grand Bahama resident Viola Evans does not support closing the borders when the country is dependent on tourism, as well as food imports from outside the Bahamas.

“In a country that is unable to feed itself and which depends on imports, what determines whether some of the boxes or trailers of foodstuffs coming in aren’t affected? None of our reps are there to ensure the proper screening methods are being followed, we have to trust their system. So, for me, it’s a catch 22.

“Screening tourists or Bahamians coming from abroad is done in the same manner I assume, so it could be a returning citizen that brought it in the country. So, it would be foolish to close the country down because of the two new cases,” said Mrs Evans.

She said people conducting screenings must be thorough. “Unfortunately, some of our folk still don’t realise the seriousness of this virus. It is also a shame that our country that God created to be self-sufficient got to the point where we have to depend on the tourism industry to sustain us, but it is what it is.”

Another resident who wanted to remain anonymous expressed concerns over the “irresponsible” attitude and actions of young people in the country who are not adhering to the COVID-19 rules.

“I think people need to be responsible, and there are many people in GB following the rules. For the longest period, we had not had a case in GB, and people were going about their business and being responsible adults,” the resident said.

The resident added: “We are a stone’s throw from Florida, and we are opening our borders to a state that had 10,000 cases a day. Obviously, there is going to be one or two slipping through, and obviously, the PM is well aware of that – that is something beyond our control, but again the Bahamian people should not be punished.”

“I think the message the Prime Minister continues to send is for people to be responsible,” she said, explaining that 24-hour mandatory lockdowns and closing the borders again are not the answers.

The resident stressed that the economy cannot survive with people “locked up in our homes.”

“The economy needs to be flourishing and growing, and I think COVID is something we are going to have to learn to live with for quite some time, maybe years. We must be responsible and follow the guidelines (wearing a mask, sanitising our hands, and social distancing).”

“Given the global situation, I expected that more cases would emerge especially as more testing takes place. If the persons who tested positive are those with compromised immune systems, my concern level is all the more heightened. It’s most important that we maintain our composure and heed the specified precautions from authorities and not panic. No doubt, we will hear of more cases...” he stated.

Etienne Farquharson, a senior citizen, said that management of the virus is difficult, especially with so much misinformation circulating on social media.

He said: “The COVID-19 fear or lack of fear poses a conundrum because there is no precedent to underpin the legitimacy of the information. The conundrum is exacerbated and confused by social media which is the Bahamas’ preferred information source.”

The U.S. has the highest number of cases in the world thanks to the incompetent Donald Trump who has done little, if ANYTHING to stop the spread. He went to Tulsa, OK two weeks ago and held another campaign event and as usual didn't wear a mask. Now two weeks later Tulsa has a spike in virus cases. He wants the schools to reopen even though this virus is spreading in the U.S. like wildfire. what a stupid moron! His incompetence is killing people including Bahamians! His attitude shows that he couldn't care less. PROTECT THE BAHAMAS INCLUDING THE BAHAMIAN PEOPLE. CLOSE THE BORDERS ESPECIALLY WITH FLORIDA, a major hot spot. Would hate to see what will happen if this virus gets out of control in the Bahamas! If there is justice in this world than Trump will hopefully go to jail real soon. Since there is money involved here, I won't hold my breath!

From my days in grade school, the US is made up of states, they control health

Actually, the fed manages all major crisis regardless of location.

and the states have the final say

The man is a stranger to the truth. Remember the VAT lie, the spy bill lie the BAH MAR lie.

It is absolutely foolishness to open the borders to Countries with high incidents of COVID 19 and close the beaches to the poor. It makes no sense.

I doubt there are any new case. I believe he is making all this up. trying to clean himself up. because he looks so bad. keeping poor people off the beach in these hot days, I am sorry the children will not be allowed to play in the sea water. What a shame.

Wait til Bimini reports. They should have gone to safe countries and offer tourism deals to them. Put B'air to work, offer low airfare and work with the hotels to offer packages. If they knew we were safe they may come. But now that Americans are just jumping in their boats and coming without testing, only a matter of time. No economy if we get overwhelmed.

Thats why everyone needs to follow the instructions from the scientist and not politicians and economists. Stay home and take every caution as necessary. I agree with the closures of beaches because they become a hotspit quickly.