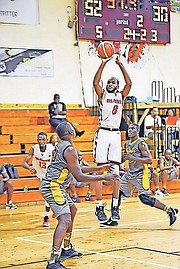 Adam Johnson is the latest addition to the programme and will join the For-Sur-Mer Provence Byers Academy in France.

The 6’6 player will join the Byers NM3 team in the upcoming season. The former Jordan Prince William Falcon has spent the last few seasons playing in the New Providence Basketball Association while awaiting his opportunity to continue his career overseas. “Honestly I’m ecstatic, honestly didn’t think it was going to happen, but I’m happy it’s finally happening,” Johnson said. “Hopefully I can go out and show what I can do.”

Former national team player and current member of Byers A-team in the French Pro B League, Jaraun “Kino” Burrows, began Raw Talent as a means of assisting developing players during the summer months.

“The objective with Raw Talent started with my own personal workout sessions and I noticed a lot of the top prospects and student athletes abroad were having trouble in the summer coming home and getting in the gym and getting quality work. My gym time was sanctioned through the national team so I was just inviting these young players into the gym. A lot of the guys were going back to school but then there were also a lot of guys having trouble with the visas so I just decided to use my platform and my contacts in Europe for Bahamian kids, Caribbean kids to come to Europe to develop their skills and also for an education. The hope is just continue to use the platform to do what I can to create opportunities for young Bahamians.”

Bridgewater made history when he became the first Bahamian player to make the jump straight from high school to the professional basketball ranks when he signed a junior pro contract with the Byers.

He spent his first season as a member of the club’s Epoirs (Junior League – U21). In 28 games, he averaged 15.7 points, 4.1 assists and 4.2 rebounds per game. He competed in the NM3 League last season and was recently placed on loan to Sapela Basket 13 of France’s Nationale Masculine 2 (NM2) League.

Wilkenson “Kenny” Isnord also made the move to Europe in Europe through Raw Talent. The Abaco native joined the Get Better Academy (GBA) in Prague, Czech Republic as he looks to make his transition from the prep ranks.

“Kino Burrows reached out to me and spoke about an opportunity in France at an academy, a place where the main focus would be on the development of my skills. I saw what he did with Dominick Bridgewater and all the success he achieved all in just a year so I trusted him and went with it,” Isnord said. “I went to France in September of 2019 with nothing and by God’s grace came back with a few options on the table. We chose the GBA in Prague, Czech Republic because it’s the best fitting situation for me, the development of my skills and the future of my career.”

Burrows said the organisation continues to grow each year with more prospects in the pipeline.

“Things are growing so quickly, the family is getting bigger year by year, now we’re not only in France, but we’re in the Czech Republic and now we have Adam coming over this year and there are some legit under-15 prospects in the pipeline that I think have NBA potential,” Burrows said. “Over the next five years I just want to continue my effort in development, in exposure and in mentorship. We know the level of talent, the world knows the talent level we have in The Bahamas and when we get the right development and coaching, the possibilities and opportunities are endless. I just want to do my part. I love home, come home every summer to scout fresh talent and to give back. We will keep growing through the principles that put Raw Talent on the map.”

With even more attention drawn by the Bahamian players to the European market, Burrows said more initiatives need to be in place to develop the game at a younger level and to create more opportunities for young Bahamian players.

“There needs to be more common goals among the youth coaches, night league coaches, so on and so forth. There needs to be better partnerships with other federations to create the best opportunities for Bahamian kids,” he said.

“Basketball programmes that we used to have growing up like mini, super mini, The Bahamas Games and so much good basketball has been taken away. All of these help the growth of the game and that’s what we miss in development.”