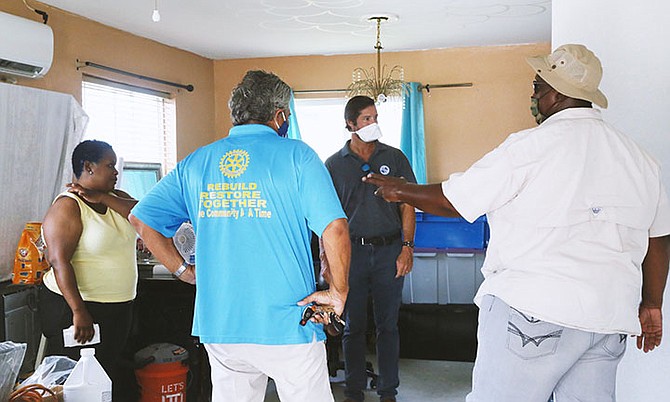 RUPERT HAYWARD, executive director of GBPA, and Rotarian James Sarles with residents of Pioneer’s Loop whose homes were repaired through the GBDRF and Rotary home repair initiative.

WITH the support of the Grand Bahama Disaster Relief Foundation and its partners the Rotary Clubs of Grand Bahama, over 600 families are now back in their newly repaired homes since Dorian.

GBDRF, the charitable arm of the Grand Bahama Port Authority, provided funding for the repairs, and the Rotary Clubs facilitated by managing the building and repair project initiative.

“It has been the collaborative effort and successful partnership…that allowed the assistance given to residents to be so impactful,” said a spokesperson for the GBDRF.

Rotarian Darren Cooper thanked a team of young men from Seagrape, Eight Mile Rock, who assisted in carrying out the home repairs.

“With financial support from Rotary out of Orlando, Florida, we have been able to pay the Seagrape group to work full-time with the GBDRF and Rotary to carry out the home repairs,” he said.

Rotarian James Sarles said the Pioneers Loop area in Freeport was also inundated with seawater as a result of the hurricane. He noted that they, with the support of GBDRF, went in with a team to remove all of the mould infested material and brought in mould remediation to ensure a healthy home, and replaced damaged Sheetrock.

“Roof repairs were also made where needed and, with the help of the GBDRF, homes have been refurnished. We are so grateful to the GBDRF for making it possible to rebuild for so many families in need,” said Mr Sarles.

Rupert Hayward, executive director of GBPA, during a recent visit to the Pioneers Loop area where 40 homes were remediated, met and spoke with some of the residents there who benefitted from the initiative.

“Residents expressed deep gratitude and relief for the help provided by the partners in returning residences to safe, healthy environments. The GBPA established the Disaster Relief Foundation to assist Grand Bahamians in times of disaster, such as what we experienced with Hurricane Dorian. I am so pleased to see the combined efforts of the partnership making such a difference in the lives of so many,” he said.

He noted that in the face of recent challenges brought by COVID-19 and in the early weeks of a new hurricane season, partners continue to assist in remediating Dorian-ravaged homes.