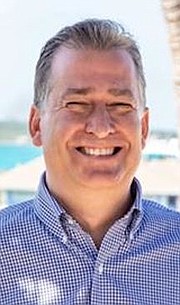 Harbour Island was yesterday remaining optimistic it can retain tourist business that was running at up to 70 percent of pre-COVID levels despite having to counter damage created by international media.

Joseph Dargavage, pictured, managing partner at Harbour Island’s Romora Bay Resort & Marina, told Tribune Business he and the resort had to field “hundreds of calls” from a concerned boating and yachting community after outlets such as CNN and the Miami Herald gave the impression that The Bahamas had completely sealed its borders to US visitors.

This neglected the prime minister’s confirmation in his Sunday address that charter and private aviation flights, as well as private boats and yachts, will still be able to bring visitors to The Bahamas despite the cessation of commercial air and sea links with the US - a point that Dr Hubert Minnis was forced to reiterate yesterday in unveiling Grand Bahama’s two-week lockdown.

Mr Dargavage yesterday said Romora Bay and other marinas had been working with the Ministry of Tourism and government to get The Bahamas’ correct position out, adding that no boating and dock reservations had been cancelled yet as a result of international media misinformation.

He told this newspaper that he was still positive that Romora Bay would receive business equivalent to 70 percent of pre-COVID-19 levels, with his property and Bahamian marinas in general able to save what remains of a shortened summer boating season.

“I’m going to stay positive and feel we can get most of those boats still here,” Mr Dargavage said. “At this point in time I’m holding to that, and that we will get most our reservations for the next five weeks. They’ll still come.

“It’s the matter of getting the right message out there. We have had a lot of people calling concerned, and trying to get a better understanding. The worldwide press decided to run with The Bahamas being closed to every individual from the US. If they’d listened to our Prime Minister carefully, he never said we were completely closed.

“It will affect our yachting business but we’re doing our best to calm that sector, and are sending out PR and working with the Ministry of Tourism to state that boating and yachting are still open,” he added. “Once everyone gets the message and looks for alternatives to commercial aircraft, it’ll work out.”

Mr Dargavage, who added that Romora Bay planned to keep on all staff while “carefully watching what happens in the next week or two”, disclosed that Harbour Island’s hotel owners group was working to encourage charter operators to fill the void left by commercial aviation.

“At this point in time we’re staying encouraged,” he said. “Our hotel owners group has been meeting on a daily basis to come up with back-up plans. We are working to get our guests in touch with charter operators throughout south Florida.”

Other Harbour Island residents also voiced confidence that the popular tourism destination would be able to survive the temporary cut-off of commercial air and sea travel from the US. James Malcolm, a property management specialist, told Tribune Business: “We have a few cancellations but I would say 70 percent of the guests come by private plane and boat.

“No one is leaving or panicking. They plan to leave by boat. The Harbour Island traveller is a fairly sophisticated traveller. The commercial airlines had not ramped up service. The south Florida-based charters are going to make a windfall in the next few months, as are Odyssey and Cherokee Air.”

Revealing that Harbour Island is “full of 35-40 feet ‘go fast’ vessels’”, Mr Malcolm added of the commercial transportation block: “It’ll be a bit of an impact, but I’m getting calls from people in south Florida looking for charters. I’m not worried about it. I understand what the Prime Minister is trying to do and support it.

“I showed property today to someone looking for a multi-million dollar property with significant acreage where they have space and can hide from the world. Any business the Out Islands get between now and the end of August will be coming by private plane and boat. With the big hotels in Nassau closed the impact will be a lot less.”

This guy is lying through his teeth. The third paragraph of the Miami Herald story says this: “Also allowed under the new order: private international flights and charters and pleasure crafts.”

The fourth paragraph of the CNN report says: “However, private international flights, charters and yachts from all countries will be allowed.” Even the headline referred to “most tourists.”

It took me 2 minutes to find that, but Neil Hartnell didn’t bother. He just listened to this guy’s lies, and reported his lies. Shame.

To be fair, the Tribune hasn’t been a beacon of journalism for quite some time now. Most of the pieces i typically come across are filled with quotes with very little context, push back, facts, subject matter expertise or inclusion of contradictory statements.