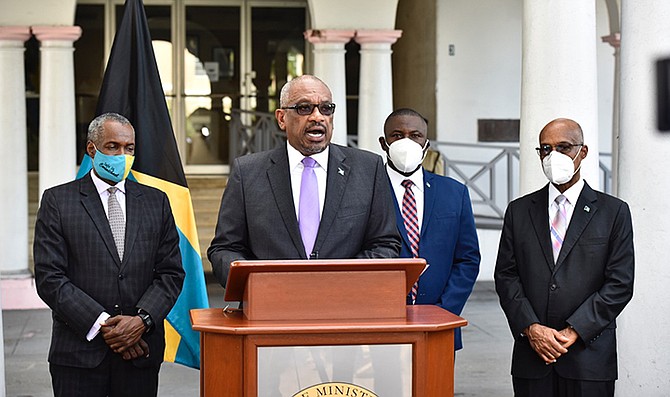 DECLARING Grand Bahama a COVID-19 hotspot, Prime Minister Dr Hubert Minnis yesterday announced a two-week lockdown of the island after a total of 61 cases were recorded there since the country re-opened its borders in early July.

Giving a brief statement ahead of a Cabinet meeting yesterday, the nation’s leader said the lockdown will begin on Thursday at 7pm and end on Friday, August 7 at 5am. The move comes as Grand Bahama continues to see a surge of COVID-19 cases after a more than two month lull in cases on the island.

Noting that strict measures are “absolutely necessary” to protect the health of Grand Bahamians, Dr Minnis yesterday ordered the 14-day lockdown, including a shutdown of all flights and sea vessels except for those carrying essential goods and services. As of 6pm yesterday, all domestic flights in and out of the island have ceased.

The Grand Bahama Humane Society and waste disposal/sanitation companies will be permitted to open Monday to Friday from 7am-1pm.

However, Dr Minnis added: “During Saturdays and Sundays, a complete lockdown will be in place.”

His announcement prompted scores of residents to flock to food stores to stock up on groceries and supplies, while others headed to the airport in an attempt to leave the island before flights stopped.

Dr Minnis said essential workers will be able to visit pharmacies, grocery stores and gas stations on Saturdays from 7am to 1pm.

Regarding construction activities related to hurricane restoration and preparedness, Dr Minnis said those activities will be permitted but permission to buy supplies will be on an emergency basis only once the lockdown begins.

Saying “we must work now to stop the spread of the virus on Grand Bahama,” Dr Minnis warned Grand Bahamians not to leave their homes unless it is an emergency or if they are an essential worker.

“A lockdown like this is not something that would have been preferred,” he said outside the Churchill Building yesterday.

“But it is absolutely necessary because things will get much worse on Grand Bahama if we don’t take this strong measure now. I know that a measure like this even further disrupts daily life and economic activity. But we are in an emergency situation.”

The new restrictions come days after Dr Minnis implemented a tighter daily curfew for Grand Bahama and banned international and domestic travel to and from the island.

All commercial flights and vessels are also banned from entering the entire country, beginning today, except for those from Canada, the United Kingdom and the European Union.

On Sunday, Dr Minnis linked the spike of cases to the re-opening of the country’s borders, adding that “surveillance teams have traced many of the cases to Bahamians returning to The Bahamas.”

Due to the rising cases on Grand Bahama, the prime minister also foreshadowed a possible lockdown on the island on Friday if efforts by health officials proved unsuccessful to stem the rise of cases there.

However, after 20 cases were reported on the island on Monday alone, Dr Minnis said he consulted with health officials and “the decision was made to increase restrictive measures as soon as practicable.”

Other additional restrictions for Grand Bahama include the suspension of funeral gatherings and face-to-face church services, which can now only be held virtually. Dr Minnis said funerals on the island can only be held at the graveside and with a maximum of ten people, including the officiant.

He said while measures like these even further disrupt daily life, it is essential in order to contain the spread of the virus on the island.

He added that the government is committed to doing all it can to help those in need during this lockdown.

“The National Food Distribution Task Force and the Department of Social Services are making arrangements to ensure that food needs will be met during the lockdown,” he said.

“It is anticipated that food vouchers will be distributed to 14,000 residents. Additional support, security and enforcement of the lockdown will be provided by the Royal Bahamas Police Force. Various measures are being taken to ensure the safety of essential workers on the island, including the use of PPEs.”

He also said the RBDF would form a perimeter around Grand Bahama.

Yesterday, opposition leader Philip Davis said he is concerned about the spike in cases while hitting out at Dr Minnis for not taking questions from the media during this crisis. He also admonished Dr Minnis for opening the country’s borders too early.

“It has become clear that when this government opened the borders, they were not prepared to do so safely,” Mr Davis said in a statement.