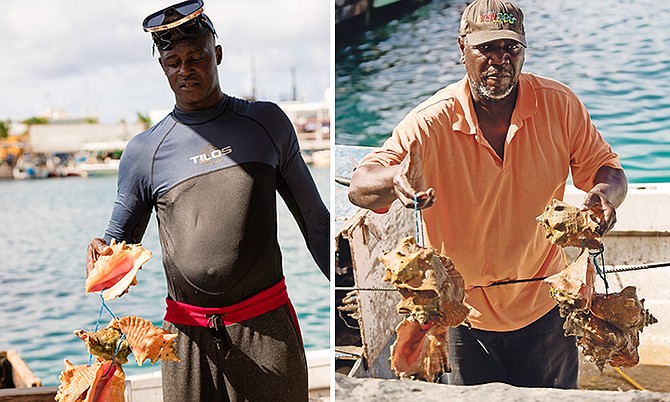 TRADERS estimate more than 100,000 conchs have died and gone to waste this year because of COVID-19 restrictions forcing the closure of popular food outlets and the loss of thousands of dollars revenue. Photos: Donavan McIntosh

TRADERS estimate more than 100,000 conchs have died and gone to waste this year because of COVID-19 restrictions forcing closure of popular food outlets and the loss of thousands of dollars revenue.

Vendors at Potter’s Cay Dock yesterday shared pictures and videos with The Tribune showing what happens when captured conch are neither quickly sold nor kept frozen.

Tied with strings and bunched together at the bottom of the sea, the conchs become victims of sea centipedes and other elements of the ocean. Dead, unfrozen conchs are not edible.

Dwight Bastian, 43, owns the Tall Boy conch stall. He estimates he has lost about $10,000 in potential revenue after more than 5,000 of his conchs recently died.

“I went out and brought like 6,500 conchs that I collected over about four days,” he said. “More than 5,000 have died and the rest I sold before we were ordered to close. It’s not just the centipedes that kill them, it’s the sand and mud that blows into them when they in the water. Usually we sell conchs quickly so most don’t remain there long enough to die even though at least few are normally killed by the centipedes. The conchs have to be moving to fend for themselves and stay alive, they can’t just be sitting in the water because they will die.”

Wendi Constantine, president of the Bahamas Dock and Allied Venues Vendors Association, wrote to Dr Minnis on July 23 “begging” him to revisit his decision shutting down the areas.

“I had a few members sent me a count of the amount of live conch they have in the water at this present day,” she wrote. “Just four vendors have over 8,000 live conch in the water. (Losing) that amount sir, for all vendors, would be catastrophic. These vendors are not boat owners who sell conch wholesale, they buy conch for product only (salad, crack conch, etc.). It’s summer time, rainy weather, the conch is weak during this time of the year and will not survive long punched up in the water. It would be devastating to have our precious commodity die and (sic) senseless death.” She said she never got a response to her letter.

“They’re saying the conch is becoming extinct, but you are allowing them to just stay there, die and be wasted,” she said.

Vendors at various hubs around the country have been dismayed at regulations shutting them down since the beginning of the COVID-19 crisis, calling it a double standard that other restaurants and stalls have remained open. Some note police stations are in the vicinity of both Arawak Cay and Potter’s Cay, making it easy for police to enforce social distancing rules if they choose to do so.

“We should be compensated,” she said. “Since you are dictating and saying this is how it’s going to go, tell us what you are doing for us. The conchs have been dying like the thousands out there.”

Mr Bastian said there are easy solutions that could ensure social distancing protocols are followed while vendors are allowed to sell their stocks of conch.

“The government could allow vendors to have one window open that we could serve people from while we do social distance,” he said.

“People could call us, tell us how many conchs they want, and come and pick up their orders when we tell them it’s ready. The government should’ve never allowed outside sitting in these areas. They could have let us do something similar to the curbside services so people don’t have to stick around. They have to start taking us and the conchs into consideration. To see other restaurants open, it hurts knowing we put this government in place and they’re supposed to be working for the people.”

“We should be compensated,”

Boy I could have eaten some of those conchs

And the saga continues.... more losses than gains with these last minute lockdowns and business closures. Do you still think the competent fool is trying to save lives??? I think he’s out to destroy them.

vindictiveness. remember how he "punished" Eleuthera?

Maybe this is the time to give the conchs a break! they don't overbreed as much as Bahamians!

Looks like alot of undersize conch. Plus these guys could have untied and let the conch go once they knew they weren't going to be able to sell them....this was just gratuitous waste by these folks.

Lol, that is very funny

do they have a freezer?

Have you ever paid an outrageous BPL bill?

We are in a National Health Crisis ... indeed the World is ... these Fishermen and Conch Vendors (and the Department of Fisheries, who apparently remain on “full” Salaries) have acted in an incredibly irresponsible manner by not releasing these “tied” Conchs when they realized there would be no short term market for Conchs so they could at least survive ... indeed acting in such a “responsible” manner “could” have had an incredibly positive environmental impact by replenishing the Conch population around New Providence that has long been fished out.

Exactly, well-said. Why gather them only to let them die? Ease off conch fishing this year, let them replenish, as everybody from environmentalists to the fishermen themselves realize is necessary. Senseless. Just senseless.

put conch in a pen underwater not tie together so they can move about freely. Minister please look in to this matter

The economy is defined as the wealth and resources of a country or region, especially in terms of the production and consumption of goods and services.

What people do not understand: All vendors, fisherman, Potter’s cay, taxi drivers, Arawak Cay fish fry, straw market vendors, restaurants and other business that offer services is a part of Bahamian economy.

The government is only allowing portion of economy to reopen. How is this fair?

There are many Bahamian people who depend on these businesses for their livelihood. With the economy only running on 20 percent. How can people pay their bills or make a living?

Many people understand that because of COVID-19 we need to operate in with caution by wearing a mask help prevent the spread, washing of hands and social distance.

The problem is unfairness to other small businesses who is a big part of building the Bahamian economy and Tourism industry.

We need to open the economy by getting small business back into operation and have clear restriction should be for all business.

If government is going to shut down small business vendors who depend on their livelihood and income.

Then the government should offer a bail out, funding to pay all small business that had to close or lost revenue due COVID-19. Every-time a small business closes they are losing revenue which is putting them out of business.

We need to get our economy moving with caution. We need to think about the livelihood of the Bahamian people and how small business vendors is struggling. What can the government do to help them?

there should be a season for conch - all commercial exports banned - make the fucking tourists come here to eat it, take a little with you when you leave if you want - but keep it Bahamian and keep it in the Bahamas. Potter's Cay and Arawak continuing as they are and there will be no more Bahamian conch in under (10) years at this rate.

you hit the nail on the head sealife, put a closed season on conch for 6months out of the year. what is going to happen when they cannot find conch anymore, guess the government will have to feed and cloth them.