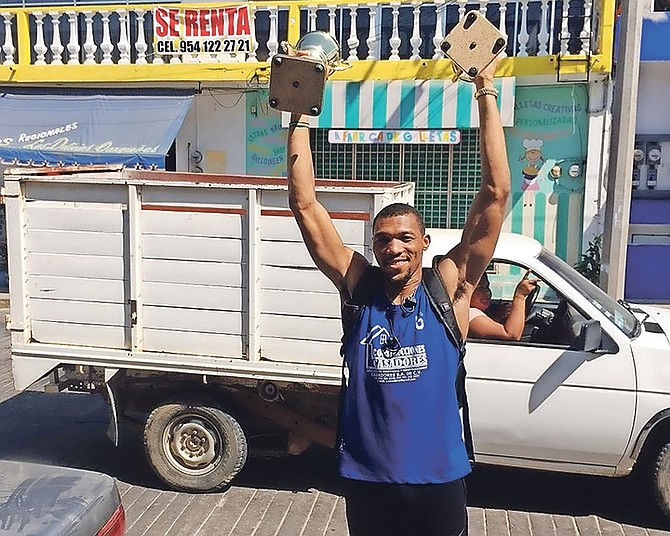 Considering the fact that he was told by doctors during grade seven at Jack Hayward High that a mitral valve prolapse (MVP) heart problem would not allow him to play sports anymore, Trevor Bain Jr made a remarkable comeback this year to win a title with the Las Ranchos basketball team in the Zacatecas League in Mexico. But as a late bloomer, who didn’t get back into sports until he graduated in 2014, Bain Jr had to go through his growing pains in his rookie season as a professional basketball player.

Considering the fact that he was told by doctors during grade seven at Jack Hayward High that a mitral valve prolapse (MVP) heart problem would not allow him to play sports anymore, Trevor Bain Jr made a remarkable comeback this year to win a title with the Las Ranchos basketball team in the Zacatecas League in Mexico.

But as a late bloomer, who didn’t get back into sports until he graduated in 2014, Bain Jr had to go through his growing pains in his rookie season as a professional basketball player.

Without any major concerns for the spread of the coronavirus, the Mexican League was completed as the Las Ranchos finished in the eighth spot in the regular season, but they turned it up a notch in the postseason to clinch their first title as Bain Jr was named the most valuable player.

“It was different. I’ve been playing commercial and night league basketball in Grand Bahama since I started playing,” said Bain Jr, the only foreign player on the team. “But playing over there in the different cities was quite different.

“I had a lot of star players on my team, so it was much harder for me. I played the one and the two (point and shooting guard) and sometimes the three (small forward), depending on who was on the floor.”

The 5-foot, 10-inch 24-year-old said he was surprised when he went to Mexico in December to learn that the Las Ranchos never made the playoffs, much less win a title. He expected the losing tradition to continue as he doubted himself and he even found himself on the sidelines watching after he tore his left hamstring in their final practice game before their first regular season game.

“I was going up for a lay-up in a three-man wave when I tore my hamstring,” he recalled after he suffered the injury in January. “That kept me out of action for about two months. When I did come back to play, we only had about 25 games left in the season.

In order to get into the playoffs in the eighth spot, the Las Ranchos had to win 16 of their final 25 games, which they accomplished with Bain Jr in the line-up as he made his return in March.

“I played like five minutes or one quarter when I got back, so I really didn’t start playing a full game until May,” said Bain Jr, who averaged about 28 points per game with nine rebounds and six assists before he increased the numbers to 32, 11 and seven respectively.

“I didn’t win no season awards or anything like that, so I was very good when I won the MVP for the championship,” he pointed out. “There was over 200 players in the league and when the season was over, I was put on the list at 126 ranked player. Hopefully next year, I want to try and win the league MVP, scoring title and championship.”

Back home in Grand Bahama since July 17, Bain Jr said he intended to spend some time with his family and fans before Prime Minister Hubert Minnis imposed a two-week lockdown of the island due to the spike in the coronavirus cases since reopening the border on July 1.

“I got stuck in Mexico when I was about to leave. Even though our city didn’t have any cases, Mexico had a lot of cases, so they had their border shut down and I couldn’t get out right away,” Bain Jr remembered.

“But I still kept in touch with home and I heard about what was going on. So when I came home, everything was going good for the first week and right out of the blue, the Prime Minister shut us down.” Bain Jr said his first instinct was to try and get off the island, but he couldn’t get a flight so he had to stay home.

Once the lockdown is lifted and he gets word from his agent, Bain Jr said he will work on returning hopefully to Mexico to play in the same league with the same team next year. But he said his agent will probably look for somewhere else for him to play if they can’t increase the amount of money that he received this year.

“The season doesn’t start until January, so if something doesn’t come up by then, I will probably go back to Mexico,” said Bain Jr, who will celebrate his 25th birthday on September 29, one day before the Emergency Order expires in the country.

Looking back at his initial season as a pro, Bain Jr said he accomplished a lot as a player because he remembers how wild and aggressive he was.

He noted that when he went to Orlando to try out for the National Basketball Association’s D-League, the Magic organisation helped to groom him to be a better controlled player.

“In Mexico, it was tough,” Bain Jr said. “In the first game of the playoffs, this guy held the ball with his two elbows out and he knocked me down and knocked out one of my teeth.

“In game three, I got knocked out of the air, I hit my head and had to get some stitches. I never had to worry about nobody trying to hit me when I am in the air, but in Mexico, they were pulling my jersey, hitting me in the back and tried to hurt me.”

As a Bahamian, Bain Jr said he sucked it up and was determined more than ever to get over the pain and try and win the championship for the Las Ranchos.

“That first series was the hardest for me,” Bain Jr said. “The team we played was unbeaten. But once we got over them, we knew we had a chance to do very well in the rest of the playoffs.”

As a budding sprinter, long and high jumper, Bain Jr said he was disappointed when he passed out and fell out, only to find himself in hospital, diagnosed with the MVP heart condition and he was told that he couldn’t play anymore sports.

“I couldn’t run track and playing basketball just for fun,” Bain Jr said. “Track was what I wanted to do. “When they told me I couldn’t do sports anymore, I didn’t know what to do.

“So high school was extremely hard watching everybody run track and play basketball. My mom had it and she grew out of it, so I guess I had to grow out of mine. But it didn’t really disappear until I came out of school in 2014. That was when I started playing basketball.”

Bain Jr, the son of Claudia Swann and Bain Sr, said he had no regrets not continuing in track because he wanted to play basketball as a result of the hype with the fans cheering in the stands.

So far, the oldest of four brothers, none of whom play any type of sports, has certainly held court for his family in Mexico for the Las Ranchos.