Residents Get Ready For Stormy Weather 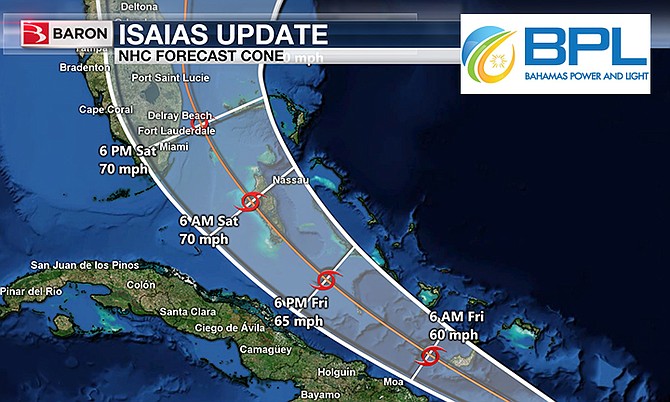 A tracking map for Isaias from Thursday morning.

Grand Bahama residents headed out to hardware and grocery stores to stock up in preparation for a Tropical Storm Isaias – expected to affect the island this weekend.

People lined up at Dolly Madison and the Hardware Centre yesterday morning after government announced hardware stores were permitted to open during the lockdown due to the threat of the storm.

Some people wasted no time in getting supplies and hardware items to secure their homes. The storm is expected to bring lots of rain, which could not only cause flooding in low-lying areas but also affect many homes still under repair for roof damage from Dorian.

James Rolle, general manager at Dolly, said people came out early to shop. “We had a good number of persons here first thing this morning; we had quite a bit of people lined up outside, but we expect the numbers will pick up later in the week as people monitor the storm, he said. We will remain open… until the Prime Minister tells us to close our doors again.”

Mr Rolle said they have stocks of hurricane supplies on hand, such as batteries, flashlight, propane gas stoves, and rope, etc.

Carolyn Fox, operation manager at the Hardware Centre, said they had a large turnout around 8am on Wednesday. “We were very busy, we had a large crowd here this morning,” Fox said.

There was also a queue of shoppers at Sawyers Fresh Market waiting to get inside to purchase essential food items. According to a male customer, a woman almost passed out while waiting in the line outside. “I came here to get a few items because of the storm and this lady was standing in front of me and all of sudden she fell back and I caught her,” he said.

In a statement, Minister of State for Grand Bahama Senator Kwasi Thompson said the announcement by the Office of Prime Minister in Grand Bahama of the opening of hardware stores is to allow Grand Bahamians the opportunity to purchase needed supplies in preparation for a storm.

“We know that in Grand Bahama, we are under a lockdown and only certain businesses were allowed to open, namely food stores, gas stations, and pharmacies, but the Prime Minister has announced he would allow hardware stores to be opened the same time as our grocery stores and our pharmacies.”