Saxons Call Halt To Next Junkanoo: Champions Stop All Work In Anticipation Event Is Abandoned 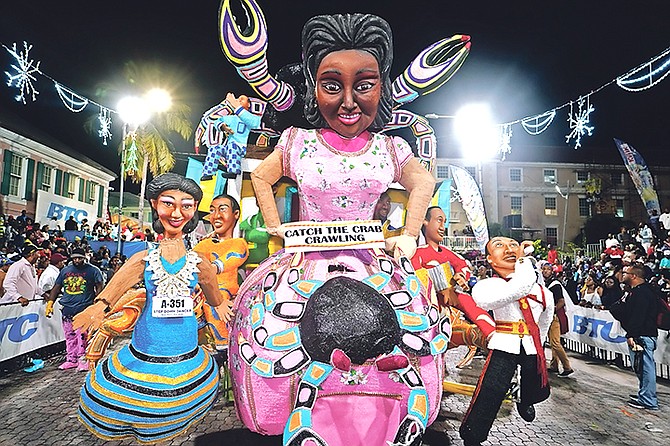 Saxons on Bay Street at the New Year parade.

MEMBERS of the Shell Saxons Superstars have stopped work on preparations for Junkanoo in anticipation of an announcement from the government on changes to this year’s parades in light of COVID-19.

Group members said they felt a “profound sense of loss” that they will not get to entertain fans on Bay Street in the traditional fashion – with co-chair Kendenique Campbell-Moss telling The Tribune yesterday they had been looking forward to defending their crowns as the reigning Boxing Day and New Year’s Day champions.

Instead, she said that extensive consultation had been going on with the government, and she and other Junkanoo officials expect an announcement soon that the parades will be different from what Bahamians are accustomed to because of COVID-19.

“All the plans and preparations have come to an end," she said. "If you see something happening, that’s going to be a virtual thing to keep momentum going but that’s not what Junkanoo is. The essence of Junkanoo is not virtual, it’s not seen on a computer screen. It’s getting to Bay Street, to George Street, lining up at the entry point and seeing your comrades and saying ‘bey, this what you bring to Bay Street, this how y’all look?’ It’s about waiting for fanfare and saying ‘boy y’all sound stink.’ Or if you see someone breaking down you say ‘help that bey so this don’t fall apart’. That is Junkanoo, not no virtual, 60-odd people dancing, that’s not it. This is a mammoth disappointment for us. Can you imagine that the Saxons have not won in almost seven years? For us to be double champions, we were looking forward to everything.”

Mrs Campbell-Moss said despite COVID-19 restrictions and social distancing protocols, her Junkanoo group managed to "get everything in place for what to bring to Bay Street” but will instead save its theme for later.

"I'm not telling you what the theme was going to be for you to tell the Valley Boys what we doing," she said. “We are the reigning champions. As the music category champions and overall champions we already started preparing our choreography, we already ordered our materials which we buy early because they come from Germany and we like to be ahead of the game. Usually we cover 50 percent of costs early and the other 50 percent when materials are delivered.”

She added: “It’s not that we agreed to (forgoing Junkanoo parades this year), but because of the pandemic and the orders that have been given and sent to us we had no other choice but to conform based on pandemic restrictions in the nation. The utmost feeling among us is a profound sense of loss because in some instances Junkanoo accounts for 100 percent satisfaction. It is not just women and men coming together, this is a life that we live and in some instance people have made their livelihood around Junkanoo. We are very disheartened but we understand that based now on what’s happening in the country, this is a necessary precaution that we must take. We pray that next year something different would happen and we will get on Bay Street and rush because Junkanoo is the greatest show on earth.”

The Saxons in July typically conducts tests for its brass section and backline while preparing for the Junkanoo Summer festival and Fox Hill Rush, Mrs Campbell-Moss said –– but that's not happening this year.

“Whatever happens, it won’t be anything competitive,” she said. “We’re not looking at doing anything competitive because we know people are hurting. Now, if we find a cure (for COVID-19) by tonight we could get to Bay Street in the morning if y’all push us because we don’t play on this road. When we line up it’s a movie.”

Yes, postponing this year's parades will probably be for the best.

The decision was inevitable. Better safe than sorry. Better to make an early decision than to continue to labor in vain.

That's too bad, but everything is getting canceled. I go back to work for the first time since March 13 and I can't wait. I need a escape. We are going back to school Monday with no promises. Bringing all of those children together could cause the covid numbers to really increase. Praying everyday for God to take care of all of us! I miss the kids and I'm looking forward to going back to work.

I read this morning Herman Cain loss his life to Covid 19. We lost a good man to this virus. Maybe our government will admit we have a problem and make people comply to safety guidelines. Americans have really showed their ignorance with refusing to follow guidelines. Maybe now that one of them has loss his life they will stand up and take notice. Prayers for his family during this time. RIP my friend!

For the best. Even the Olympics were cancelled.

Real shame for everyone involved but just imagine how great the next Junkanoo will be when we are all through this horrible period.