DIANE PHILLIPS: True tears for a real hero who devoted his life to the struggle for equality 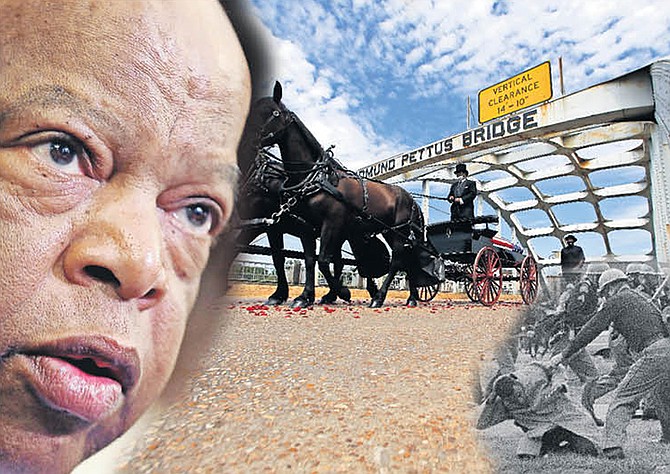 John Lewis, whose memorial was being held yesterday. He was beaten, bottom right, when he tried to cross the Edmund Pettus Bridge in Selma - but given a horse-drawn carriage across the bridge following his death.

If you watched the moving coverage of the long farewell to former US Congressman John Lewis this week and did not shed a tear, please check the place where your heart is supposed to be. You did not have to worship him. Trump wouldn’t even go to his memorial. But, my God, you had to respect him and understand that it was because of his courage and the courage of people like him who stood up for what they believed, that American citizens have the universal right to vote.

It was because of what happened when six brave people, including Dr Martin Luther King, John Lewis and a woman named Diane Nash, attempted to cross the Edmund Pettus Bridge in Selma and were viciously attacked by police, trampled on, beaten on what became known as Bloody Sunday and stood back up to fight for what was right that the Civil Rights Act of 1965 was passed.

It was because of their actions, the abuse they withstood for the principles for which they held that the world took a sharp left turn in the 1960s and never turned back.

Like the final tightening of a screw, every end owes its success to the beginning. The civil rights movement was no different. Long before it shot out like a burst of cannon fire, it was a slow burn. The feeling of despair leading to a demand for change brewed and simmered until it boiled over.

I saw it firsthand in a college town called Gainesville. There were two Gainesvilles, the one where students strolled the lush campuses of the University of Florida, sat on benches beneath tall oak and weeping willow trees, drank endless cups of coffee at all-night restaurants catering to those who crammed for exams. And there was the other Gainesville where poorer people lived, many who kept the campus clean or green or fixed the machinery and filled the fuel tanks of cars they would never be able to afford. That was the Gainesville I ventured into every Friday night with a small group of students to register people to vote.

It was often dark on those streets. Light poles were random. I’d approach a house, knock on the door and peer around as it opened a crack. Sometimes there would be a group gathered in the street, easier to access. We carried flashlights and clipboards. When my co-campaigner and I tried to explain what we were doing there, the importance of voting and how easy it was to sign up and make your voice heard, we were met with stares and a wall of silence. Some evenings we would return with a dozen or so names, but for the most part, residents of the other Gainesville did not believe that being black their vote counted.

Now, every time we complain that the world has not come far enough, I remember those nights of pleading with people to understand that they had the right to be heard, that their voice mattered.

Every time we complain about the difference between black and white rights, I think about those dimly-lit streets where hard-working people retreated, fearful of speaking out or believing it would make no difference.

Rep John Lewis’ death was a stirring, poignant reminder of how one man can make a difference. For 33 years, 17 terms in office, he stood for what was right, for non-violence and to “make good trouble”. When a horse-drawn carriage made its way across the bridge this time bearing the flag-draped coffin with the son of sharecroppers, it was guarded by Alabama State Troopers. And when Wintley Phipps sang ‘Amazing Grace’ at the rotunda of the US Capitol, his deep baritone voice bellowed out across the chasms of inequality and honoured the first black man to lie in state in America’s most revered hall.

The “conscience of the Congress” as House Speaker Nancy Pelosi called him had passed, but the principles he risked his life to enshrine would live on. He had helped tear down razor-sharp walls and uplift a silent, now vocal, minority whose lives truly matter and they know it. Rest in peace, John Lewis. Your work is done. May others walk in your shadow and pick up your mantle.

At last, a Department of Environment

At long last, The Bahamas has a real Department of Environment with legislative policy, regulations and enforcement capability, thanks to a governmental anatomical anomaly known as teeth.

The DOE was born last week, its entry into the world almost unnoticed in the midst of COVID-19 dashboards and related messages.

Just as an fyi – the US Environmental Protection Agency was created in 1970 and advocates said then it was 25 years late. But in the true spirit of better late than never, we welcome the new arm tasked with protecting and preserving that which makes The Bahamas the country it is, the environment and all of its resources.

From mining requests to oil spills, from prime forestry preservation to eradicating the detritus of vehicles across the islands that will never see an open road again, yours is a mighty task and how it is handled will make a difference in what The Bahamas looks and feels like for generations to come.

Making those who overfish pay the price

The Bahamas is marching toward the creation of more marine protected areas critical to countering the depletion of fish, conch and crawfish. At the same time, abuses by local and visiting fishermen continue with undersized catch and overfishing, even with Nassau grouper fishing during closed season for spawning. The Ministry of Agriculture and Marine Resources is stepping up its monitoring so we thought we would just provide this little insight about painful penalties that recalibrate the risk v. reward ratio. When the Florida Keys got serious about doing the same thing, it added a little spice to its enforcement of national legislation, creating its own Florida Keys National Marine Sanctuary Act. Get caught in the Florida Keys violating the Act and your punishment could range from a warning to a $140,000 fine. It works. But ouch, ouch, ouch. That’s one tough bite.