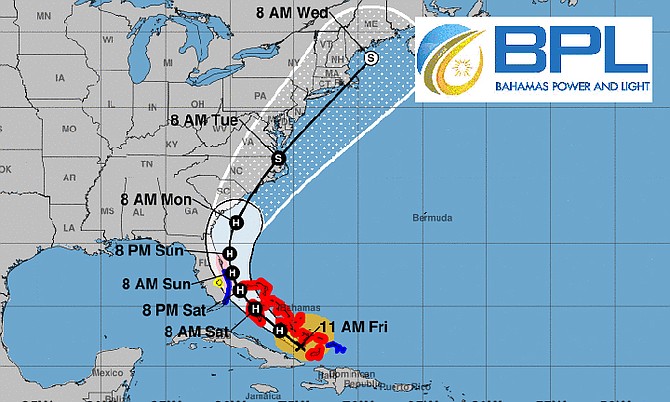 • LIVE UPDATES CAN BE READ HERE

PRIME Minister Dr Hubert Minnis said stronger measures will be implemented to prevent spread of COVID-19 after Tropical Storm Isaias passes as the country recorded three COVID-19 deaths and passed a grim milestone yesterday of more than 500 recorded cases of the virus.

He announced that weekend lockdown measures will be relaxed so people could prepare for the storm.

He said curfew will begin at 10pm and end at 5am until further notice. Food stores, water depots, gas stations and pharmacies will be permitted to open until 8pm tomorrow while hardware stores can open until 8pm tonight and tomorrow, he added.

The prime minister spoke at a National Emergency Management Agency press conference after the central and northwest Bahamas were put on hurricane watch. Tropical storm Isaias is expected to intensify to a category one hurricane and the country is projected to be given the all clear by late Sunday afternoon. Government offices will close today at 11am so workers could prepare for the storm.

Dr Minnis said: “Persons will be permitted to move around for the purposes of storm preparations and to respond to any emergencies during and after the storm. As we are in a surge in cases, especially in New Providence and Grand Bahama and the spread of the virus to other islands and cays, it’s now even more critical that everyone practice COVID-19 preventative guidelines during this hurricane.”

“I beg you, do not use this period for hurricane preparations to go socializing and visiting friends and/or family. If you do not need to be out please stay at home. We are in the midst of a pandemic and if we do not act responsibly, the consequences could be dire.”

“Based on current information and data provided by health officials, a lockdown will still be necessary following the passage of this storm. Current indicators and data reveal that much stronger protective and mitigation measures are absolutely necessary and will have to be implemented.”

In a special plea to young people Dr Minnis said: “I know that many of you are booking into the hotels during the hurricane. Use that time for security and safety. Please do not engage in hurricane or COVID parties. It will not help us. It will be devastating and we will see the after effects, if not in two weeks, possibly later.

Dr Minnis said an announcement and details of future lockdowns will be made as soon as practicable and that the Official Opposition will be invited to a COVID-19 briefing after the storm passes.

Trevor Basden, director of the Bahamas Meteorology Department, said all islands are expected to be impacted by the storm. Winds are projected to be 75mph and storm surges of one to three feet are anticipated.

He said lots of rain is expected and that most streets in New Providence will flood.

“Those areas prone to flooding should be somewhat impassable,” he said.

Asked about the potential the storm could become stronger than a category one hurricane, Mr Basden said this is highly improbable. “A feature common to both Joaquin and Dorian were that they had a weak steering pattern,” he said. “Isaias does not. The definition of rapid intensification is 35mph within 24 hours…(For that) sort of rapid intensification the system dynamically must be moving very slowly and gathering all of that energy and the convection following within its core…I like to say, things are probable but in this case highly unlikely.”

Last night’s NEMA press conference, which was briefly interrupted by a power outage, came as many Bahamians began to confront what some called a worse case scenario: bracing for a potential hurricane while COVID-19 cases are surging. The three COVID-19 deaths recorded yesterday are the first confirmed deaths since April 23 and there are now 401 active cases of the virus after 24 new cases were confirmed yesterday. Health officials are expected to give details about the deaths during a press conference today.

Meanwhile, the Public Hospitals Authority announced that it has reconfigured its wards at the Princess Margaret Hospital, the Rand Memorial Hospital and the Sandilands Rehabilitation Centre because of the increase in the number of people going to the facilities and because of staff testing for COVID-19. These have put “a significant strain on resources, including bed capacity,” PHA said.

Grand Bahama, the current epicenter of the COVID-19 outbreak in the country, is already having panic buying, according to Keith Rolle, the owner of Stop ‘N Shop Grocers in Grand Bahama.

“You only got to say that H word, especially in Grand Bahama, and everybody starts getting flashbacks,” the 54-year-old told The Tribune yesterday. “Everyone is in a panic mode. A lot of people said they would not spend another hurricane here but unfortunately you can’t even go and visit another island that may not be affected by the storm. Along with this COVID-19, this is something almost unheard of, this combination. People are panic shopping from COVID alone, just from being locked down, and we’ve seen the lines go around the building now so there’s compounded panic buying. This is our worst nightmare.”

It seems penance is being imposed on us for having enabled the evil of Minnis to dominate our way of life. I guess plague infected dead toads will rain down on us next, shortly after Isaias whollops our nation. Only God knows how much worse it will get for us.

Unfortunately, the weather channel is now saying Isaias will likely pass us as a category 2 hurricane - so they need to update the image above.
Trust me, no one wants that.

PS - If it's anticipated that the storm will be here early Saturday morning (unless it slows down further), how can food stores be open??? Everyone also needs to be indoors Friday night. Has Covid caused the government to forget how to prepare for a storm?

Deny as you may, but the curse of Minnis is clearly upon us.

Straight up the chain muddo. Maybe it will keep turning north and only catch the south.

repost: haven't you seen the videos with people stuck in traffic at 730PM? a large portion of those are people trying to get home "from work".

the point is where is cabinets brain??? Do they really need the met office to tell them it makes sense to remove the 7pm curfew? Are they gonna wait till Friday, no Saturday, I wouldnt put it past them, to make a grand announcement (like DAguilar said he can't imagine how a bride hearing Friday night she cant have her wedding Saturday would feel...seriously? aren't you married? don't you remember planning the location, the cake, the clothes, sending invitations, family flying in for the wedding?.) how do they think??? Have they lost all touch with reality on the ground?

Further I pray to God noone say says we've never done this before or who could have thought, I've heard multiple persons including myself pose the scenario of a hurricane during COVID crisis and persons crammed into shelters.

please more of that! I need another cat5, Dorian moved my stone wall and I need another hurricane coming from the opposite direction to blow it straight again. please

May God be with us all this summer, for these are interesting times...