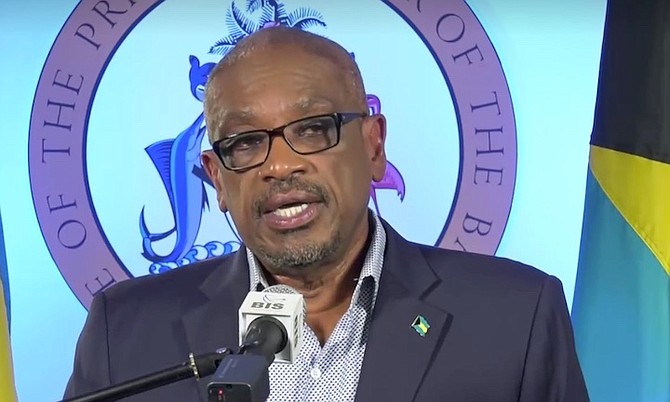 AFTER weeks of being silent concerning the resignation of former health minister Dr Duane Sands, Prime Minister Dr Hubert Minnis on Thursday refused to explain his decision for accepting Dr Sands’ resignation, only saying he wished the Elizabeth MP “well” in his future endeavours.

Addressing the controversial topic for the first time during a press conference on Thursday , Dr Minnis said: “Dr Duane Sands submitted his resignation publicly of which you would be very much aware of.”

“This matter has been discussed and debated extensively in the public domain and at this time, we are more concerned with dealing with the COVID pandemic (and) getting the economy running again and ensuring that people get their jobs back and ensuring that people have food on their tables, and we (want to) increase our employment status that we see today.

“And I do wish him well in his private sector role.”

His comments come after more than a month of continued silence concerning the issue, which made headlines across the country.

The Elizabeth MP resigned in early May after accepting responsibility for his actions in allowing six American permanent residents entry in the country with COVID-19 testing supplies without being tested for the virus.

The group were instead tested for the infectious disease the next day.

Former Tourism Minister Obie Wilchcombe connected Dr Sands with donors who supplied 2,500 test swabs that cost $11,250, prompting an effort by the health minister to get the swabs here.

Dr Sands got approval from Mr D’Aguilar for an aircraft to deliver the supplies to the country. He then contacted Immigration Director Clarence Russell who arranged his requests for the passengers.

Mr D’Aguilar told Dr Sands officials had been insisting that people coming to the country provide a negative COVID-19 test to gain entry. The Freetown MP deferred to the health minister to make the call and Dr Sands allowed the passengers entry without testing them.

In recent weeks, questions have been raised why Dr Sands was allowed to resign while other officials who were also involved in the episode were not being held accountable for their actions.

Pressed about the issue on Thursday, Dr Minnis only said he was more concerned with dealing with the country’s states of affairs amid the COVID-19 pandemic.

Dr Minnis also did not elaborate on what he meant when he said last month that protocol was breached during the episode.

Saying the matter is now “finished”, Dr Minnis firmly said: “We are moving on, trying to get our economy running and trying to deal with this pandemic and get people out functioning and working and have food for their family and selves.

“That is our priority today.”

He is now serving as a consultant surgeon for the Public Hospitals Authority.

Noting the profession as one he has prepared for his entire life, Dr Sands told The Tribune last month he was happy to return to the medical field to serve the Bahamian people.

“It’s the profession that I have prepared (for) all my life, all of my professional life to execute and I have always provided services not just in the private sector but also to public patients and that is going to continue.

“I think it’s very, very important that any skill that I have is made available just not to people with the ability to pay but public patients as well so that’s what I’m going to be doing.

"I will continue to work on the national response (to COVID) in my role not as a Cabinet minister, but as a back bencher. It’s a different role but it’s one I take seriously, and I will do it to the best of my ability.”

Dr Minnis has since taken over the role of Minister of Health and said he will remain so “at least until after the budget".

He told reporters on Thursday: “I think it will be unfair for me to name a new minister at this particular time and he or she be placed in a position where they will have to present the health budget to the nation.

“And, I think it will be appropriate that I’m here at this particular time that I should deliver the health budget to the nation and after which I would then appoint a new minister of health soon after I deliver the budget.”

Forget about Sands, unless you have a heart condition. We need to figure out what to do when the second wave overwhelms this nation....and I am not referring to a second wave of covid, but rather ....CRIME.....misguided and broke young men will terrify this nation sooner than later. That will be our second wave.

Minnis makes the corrupt, tyrannical and extravagant Roman emperor Nero seem like an angelic saint. We've seen both Minnis and D'Aguilar breach way more of the announced emergency orders (protocols) than Sands did, but without any serious consequence for them other than public ridicule as hypocrites. Minnis of course has adopted the view that as long as the emergency declaration remains in place he can both set and breach his own orders as he sees fit and can let anyone else off the hook whom he chooses to do the favour, e.g. D'Aguilar. And the abhorrent Minnis will have no difficulty taking full credit for all of Sands' hardwork and efforts while he was minister of health throughout the most difficult period of the China virus.

... when Bahamians grow up to the point where they can ignore what a person says and watch what they do, only then will they see that both Sands and the Dept. of Public Health did virtually nothing but talk. Only by Gods grace things were not as bad with covid-19 as they could have been!

Tribanon you are definitely in need of serious psychiatric assistance. Once again I must ask you if you were abused in school? Your venom and hatred is something else. Please leave the Honorable Prime Minister alone.

I am was surprised the reporter bring that up. it's old news. Sand breach the protocol and then resign... nothing secretive about that. The PM accepted it.. we all know that.

wow. robots. gonna try that with my boss tomorrow.

When will some people recognize the FACT that it is the prerogative of the Prime Minister to decline to answer such questions?

It is presumptuous and downright insulting to expect an answer.

The next set of questions TarRussell and his girl Mudda-take-Sic will expect the Honorable Prime Minister to answer is:

Come on now please provide the PM with the space he is entitled to and deserves.

Minnis as an elected official, PM and now Minister of Health is fully answerable to the Bahamian people on all important matters of public interest. The circumstances surrounding the breach of emergency protocols that culminated in the resignation of Sands but not D'Aguilar is just such a matter. To suggest the PM has the prerogative to remain silent is to suggest he has the right to be arrogant and disrespectful of the electorate, the Bahamian people. That would certainly come back to haunt him next time around at the polling stations, as will so many other things.

If Minnis did not accept the resignation, which should have been accompanied by hefty times for those that entered the country without proper permission, then Minnis would have to refund all those convictions of poor Bahamians, who were going to the pump for water, stopped on the way home to purchase food or even water, went to check on a sick relative or take them medicine. And the now infamous case of the young man who was heavily fined for selling coconuts, And what may eventually be revealed about the arresting officer in relation to this matter. However the focus should now be on the US and Especially Florida that are having surged in new covid-19 cases. And be alert to BRAZIL that now has more new Covid-19 and deaths daily than the USA. In fact will it be safe to open the boarders to the US come July/August if that country is still having spikes in its cases and deaths.

Please, spare us the excuses. Sands was perceived to be a serious political threat in the making and it was only a matter of time before Minnis would seize upon just about any opportunity to try bring an end to Sands' career in politics. But as we all well know, it ain't over yet.

This the reasoning and logic of a lobster. Convoluted, confused and contradictory. Try again.

Dr sands was a "outlier" who should not have done what he did. . .he let OB lead him down a dark hole. . .and he met some dark things in that hole!! Sands did not think he was 'liby" to ask any pm what he wanted to do. . .so the pm had no choice than to "jook up" him for "playing man". . .then yinna keep asking the pm about the same thing over and over. . .LET IT GO!!

Sands for PM mussey be one real hot button ta cause dem all ta sweat so much. LOL

So any time yinna can't make good sense ya call peoples dem trolls!! Look at sand on Miami herald. . . talking fool all over the place!! It sounds like people dem like you who "push" him to do fool. . ."disappear them 1000 plus dead peoples dem". . .them dead people dem who the international community was right here helping us to make our missing list! If you wanta call me a doc troll. . .suite ya sef. . .just don't call me a closed minded political dodo who talk like they can't think them-self outta a wet mental paper sack!! Sands acts like a weak minded "carry" by the nose politically naive person who is too easy to "swing". . .ask LBT. . .hahahahahahahaha!!

Minnis troll or not. . .trolling you will be easy!!