‘Why Ignore The Problems Here?’: Activist Asks Why U.S. Police Brutality Enrages Us But Not Local Issues 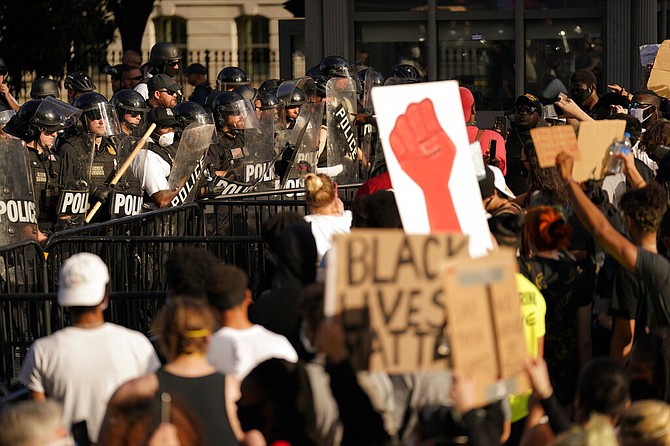 Demonstrators stand in front of police in riot gear as they gather to protest the death of George Floyd, Saturday, near the White House in Washington. Floyd died after being restrained by Minneapolis police officers. (AP Photo/Evan Vucci)

KHANDI Gibson, founder and president of Families of All Murder Victims.

AS Bahamians show solidarity with protests against excessive and deadly policing of black people in the United States, one local activist says residents should show similar interest in incidents of questionable police conduct in The Bahamas.

Khandi Gibson, head of Families of All Murder Victims, said more accountability could be achieved in The Bahamas if the public demanded it. “It’s like we Bahamians take on the US problems and ignore our own,” she said yesterday. “But we have issues here every day and people don’t pay as much attention to them.”

Issues involving local policing have been long-running themes for years. Some residents who report police abuses to the Police Complaints Unit say they never receive a response. Inquests into police-involved killings can take years to complete and unlawful killing verdicts at the Coroner’s Court may not translate into the prosecutions desired by grieving families. Defence lawyers have also long lamented the harsh interrogation tactics sometimes used, which they say amount to unconstitutional forced confessions.

Just in January, videos of officers beating several people on the sidelines of the 2020 New Year’s Junkanoo Parade went viral and sparked outrage because the men were beaten while standing against a wall and were not resisting arrest. The results of the investigation into the matter have not been revealed.

“Many times the difference between the US and here is they have videos. Over here we don’t have videos showing what’s happening and when you do try to record the police, they often tell you you can’t record them or they take your phone. The people who record then become the issue. If what happened with George Floyd was in Nassau and the police saw people recording, you think they would let them record? No they wouldn’t. But people are outraged because they could see the police put his knee on that man’s neck.”

Police Commissioner Paul Rolle told reporters yesterday the arrival of the long promised body cameras for police has been delayed because of COVID-19.

“I think we would’ve taken possession already of some of the equipment, but we’re just waiting for completion of the real time crime centre,” he said.

He also said the force was putting in place policies to deal with the negative perception of police amid complaints of brutality and excessive force.

Ms Gibson said she will wait and see if the body cam system earns the trust of Bahamians.

“I don’t think that will be up and running,” she said. “From Marvin Dames been talking about this, you trying to tell me COVID-19 stop all that? I give Bahamians every right to be alarmed at all injustices in America, but we want the body cameras and we want accountability here too.”

Exactly, and they would only take the black Bahamians phone, but let a white person record their brutality they would do nothing, they won't try and take their phone because if they think that white person is a tourist they seem to show respect and fear for the backlash, only when the person is black they want to intimidate us, and rightfully they can't stop anyone from recording anything once it is happening in the public domain.

New police commissioner sounds like another waste of time and tax payers' money.

Why is anyone surprised? Our police force is just a mirror of our society as it is today its ranks drawn from our own neighborhoods. The average Bahamians standards and regard for law and order have been headed for rock bottom for the last fifty years and now that those chickens have come home to roost we act surprised. We don't see anything wrong with black people beating or mistreating other black people, just look at how we treat the Haitians, Jamaicans, and LBGT folks in our communities, especially the Haitians and the gays. Hell, some of our so-called pastor/ homophobes even encourage us to consider gay people the devils' spawn and to beat the shit out of our children lest we are seen to spare the rod. SMT!

Police brutality here is a well known normal occurrence. Everybody knows of numerous instances where "BLACK" Bahamians have been brutalized and tortured into confessions!

The PLP and FNM are equally guilty of condoning police brutality for decades!!

... which shows that no race has a monopoly on being hateful oppressive or able to abuse those with less power. Which is why I propose we get rid of the racist card and call things for what they are, hate crimes against humanity!

So, the message is, quit being silent. Speak up, and speak out loudly against ALL injustice. That is what this is all about. Does justice see color? No, only right and wrong.