Face To Face: Two White Officers On The Front Line Of Policing In The Us - What Do They Think? 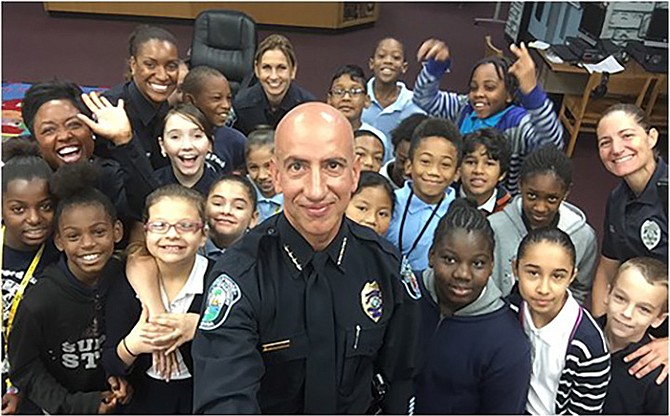 Hollywood officers serve as mentors to at-risk students and the department has established its Cops Mentoring Kids programme. Above, former police chief Sanchez.

Two police officers in Hollywood, Florida took the time to speak with me over the weekend about the protests happening in America and throughout the world. We had a conversation about police brutality, as well as racial discrimination. I think officers play a pivotal role in the successful eradication of these scourges. I encouraged them to take a stand against the wrong in their own organisation in order to make a difference. Police corruption happens because not enough police officers are taking a stand often enough against their own. They agreed and admitted that when officers “mess up”, it affects them too.

Many a bright, young recruit enters the police force with high hopes of doing some good. Some of them come just to get a job, but they’re ready to uphold the law. The force should nurture these virtues. It should foster an environment where these officers can become exemplary members of the community, because the community trusts them. They should see the future of policing as one where they work hand-in-hand with members of the public to keep crime at bay. The only way to do that is to foster trust; and at this point, the trust is practically lost.

There are police officers who have been judges, juries and executioners right out on the street. In the case that has rocked America, George Floyd was denied his right to be able to breathe, just to stay alive, then have his day in court.

Hollywood, Florida police Maj Norris Redding takes a knee and holds his fist in the air alongside demonstrators during a march to protest the killing of George Floyd by Minneapolis police. Photos: John McCall/South Florida Sun Sentinel

“It makes our job harder when we have officers (like Derek Chauvin) that mess it up (the trust of the public), and as you can see now, everywhere, across the whole country, people are protesting.”

As I watched the video of George Floyd’s deadly arrest, I saw Derek Chauvin as one of those senior officers who lost their way. Their tactics are lawless, they bully junior officers and they don’t know how to connect with the public. Then I saw the photo which revealed that two other police officers were helping to pin Floyd down. I found out that these two officers are new recruits. One asks if they could turn Floyd over and his request is denied. This routinely happens to a rookie officer, even if he is standing up for what he knows is right. I believe there is systematic discrimination right in the police force, with all the cliques that separate them instead of bringing them together on the side of right. The only hope to change that, is for officers just like the two that I spoke with, to take a stand and weed out their own bad seeds.

“A lot of that bad stuff, like you said, happens with guys who have been on the force longer and have maybe lost the reason why they started,” one officer admitted.

“For me, I just want to put in my time (as an officer), take care of my family, then get out, retire and enjoy my life. I don’t want any stupid stuff interrupting that… that’s how I look at it.”

He has been on the police force for seven years and the other officer, six. They told me that despite the fact they are relatively young, they have an opportunity to make a difference in the Hollywood Police Department.

“Hollywood (police force) is pretty unique; we are mostly pretty young,” one explained.

“The majority of us are young. At least 40 to 50 percent of us have been on the force less than ten years. Before we even both got hired, a lot of people had retired or they went somewhere else. So a lot of the (old way of doing things) changed. They changed the way they did things when they hired us.”

A part of that change is in the way officers react to situations. There are times when there is a lot of animosity between the officer and a suspect and things can get out of hand, but by working on their reactions to the situation, they can aim for a better outcome.

“Sometimes, people make mistakes; I don’t judge them for it,” he said.

“If I could go to any call and just put handcuffs on, I’d be at peace,” he said, adding there’s a lot of paperwork involved with each arrest.

“Hollywood is not an easy place. It’s not a horrible place, but it’s not an easy place, but we are trained in how to react. I think many of us don’t want to have to resort to use of force. But then you have incidents where you have people with illegal weapons. It’s extremely difficult to shoot someone in the limb if they’re running and if they have a weapon. We are trained to shoot ‘centre-vest’ in a case like that.”

But it’s not those cases that concern me to the degree that cases like George Floyd and countless others do. Situations where by all means, they had every right to be alive today and not die by the hands of police. The officers agreed with me on that, and now more than ever, it’s critical for them to do what they can to stop it.

In terms of racism and the call to end discrimination against people of colour, especially black people, these two white officers seem to side with protesters. One said he grew up in a town in the southern United States with lots of black kids.

“I grew up in a place where racism isn’t really a thing for us,” he said. “Half of the people I went to school with are black. My neighbours were black. It wasn’t a huge thing until I moved here (to Florida).”

The other said he grew up around “mostly Europeans”, which I took to mean “mostly whites”. He said, however, that he respects all races.

“Here in Florida, you have so many races. You have so many people from countries all around the world. So here, you are exposed to lots of races and cultures and I respect them. There’s all walks of life, all colours here.”

“It’s getting there, honestly,” the other officer said.

“I think it’s a generational thing. I think it will be better for your daughter in the future. This is the change that’s come about now and the younger generation will make a difference,” he said.

The Bahamas has its own share of discrimination to rid itself of. When it comes to the police force, the call is the same. Corrupt police officers have enacted all sorts of atrocities on the public.

The Royal Bahamas Police Force should take heed from the reaction of the American public to the George Floyd incident, and the subsequent worldwide call for an end to racism and to injustice by the police. We shouldn’t wait to hear of another incident of brutality turned fatal.

Police Commissioner Paul Rolle ought to call his officers together and encourage them to take heed and do their jobs correctly. Far too often, officers’ decisions that could have been handled better have changed the course of a young man’s future. These decisions have blocked up the courts unnecessarily and filled up the jail. They have caused pain and anguish to members of the public and they have broken down the level of trust between the RBPF and the Bahamian public.

The goal is to have the support of the public. Police officers are our spouses, parents, children… our friends and loved ones. But they have to stop putting up with injustice within their own organisation.

The goal is to have the public helping the police keep their cities and towns safe and free of crime. Getting the public’s assistance will go a long way in effective policing. The only way to salvage that relationship now, is for drastic measures to be taken to clean up police forces all around the world, from the inside.

This is the twenty first century., Time of drones and Robot, Sky car ?, and time of commercial travelling to the space and possibly elimination of "Nationality" in order to open doors, in PLANET EARTH 🌎 to humankind with subsequent also elimination of illegality of any human being ANYWHERE EXCEPT IN PRIVATE PROPERTY WITHOUT THE OWNER CONSENT OR PERMIT. We should be talking about reforming, systematically all Police Services until we reach to the final product of using multilingual/close to perfection Robots as such under supervision of a parallel Police car unit composed by multi cultural human Police officers with the only role of taking notes in order to systematically improve the dealing with global citizens' behavior & crime of Any kind for the betterment of humanity.