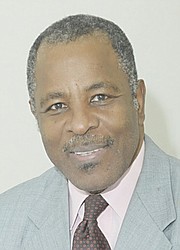 A Bahamian insurer’s parent is targeting companies struggling to rebound from COVID-19, its chairman has revealed, after its corporate structure provided a $2.33m buffer against Hurricane Dorian claims payouts.

Sir Franklyn Wilson told Tribune Business that RoyalStar Holdings is eyeing further investment opportunities created by the pandemic following a 2019 financial year when it avoided being pushed "into the red" by the Category Five storm due to its equity holdings in several affiliated companies.

While RoyalStar Assurance, the group's property and casualty underwriter, saw profits plunge by more than $4m or 82 percent year-over-year to just $908,705 due to Dorian, the holding company's bottom line was off by just 40 percent at $3.143m.

This compared to the $5.23m generated in the prior year, and resulted from RoyalStar Holdings' investments in several affiliated companies. Prominent among them is Gateway Financial, which specialises in acquiring distressed mortgages from Bahamian banks at a discount, then restructures the loans at terms buyers are more able to afford.

Gateway, which closed 2019 with $9.375m in assets and $5.242m in liabilities, generated $3.74m in net profits for its shareholders last year. RoyalStar Holdings, with its 45 percent equity stake, gained a $1.683m share of those profits, accounting for 72 percent of the $2.33m earned from its investments in affiliates.

The insurance parent's 45 percent stake in Sunshine Finance, which generated total profits of $1.195m, produced a further $537,597 worth of earnings for RoyalStar Holdings, while its acquisition of - and 32.26 percent interest in - Fidelity Insurance (Cayman) provided a further $122,180 boost.

Sir Franklyn told this newspaper that the results justified RoyalStar's decision to alter the group's corporate structure through the creation of the parent holding company, with RoyalStar Assurance beneath it. He added that the strategy was already paying dividends, with RoyalStar Holdings able to leverage off the property and casualty insurer's strong balance sheet - nearly $23m in cash and term deposits at year-end 2019 - to diversify the group through investments whose earnings will help cushion major hurricane-related claims payouts.

Indicating that the group is now seeking further investment possibilities, Sir Franklyn said: "The company has the capacity to do things. RoyalStar is well-positioned to continue to further the development and growth of The Bahamas, and that's what we're trying to do.

"The existence of RoyalStar provides us with an opportunity. Companies that may have been destabilised by COVID-19, if they're looking for good new equity partners or capital to stabilise themselves, if they're interested RoyalStar is a good option. It's worth having a conversation to see if we're interested."

Sir Franklyn's comments hint at one of the processes likely to occur as the economy begins to fully re-open following the COVID-19 pandemic and companies weigh their options. While some may never re-open, others will likely struggle to do so - including well-known brands and names previously perceived as strong prior to the economic lockdown.

A number may be unable to re-open, or continue in business, without finding new investors to inject fresh capital. Thus the COVID-19 fall-out provides an opportunity for companies and investors with deep pockets and access to financing to acquire, or take equity stakes in, other businesses as mergers and acquisitions activity gets ready to intensify.

"The results for 2019 for RoyalStar are a wonderful affirmation of the prudence of the strategy being pursued by the company, and the competence with which that strategy is being executed by the management team," Sir Franklyn told Tribune Business. "We have the holding company with us now, and it has the capacity to diversify and invest in other businesses.

"With a massive hit like Dorian, to not be in the red is a very good thing. We paid out nine-figure money, but a part of the strength of RoyalStar Assurance is that we have extremely good reinsurance programmes."

RoyalStar Holdings saw its net claims incurred almost double year-over-year due to the Category Five hurricane's impact on Abaco and Grand Bahama, increasing from $4.31m in 2018 to $8.387m in 2020. However, most of the multi-million dollar losses were absorbed by its international reinsurance partners, with "outstanding claims" recoverable from them totalling $162.586m at year-end 2019.

Sir Franklyn, meanwhile, denied that RoyalStar would lose sight of its core insurance business through becoming distracted by investment and diversification opportunities at the parent level.

"The fact of the matter is that we have an investment committee of people with real expertise and knowledge. As a result, the process of dealing with investments does not consume a lot of management's time."

Here we once again see Neil Hartnell, as The Tribune's Business Editor, helping Sir Snake engage in his puffery. And for what, a free lunch or dinner?!

Lunch, dinner and dessert, and maybe a cognac to boot!

After his previous articles, I did not think it was physically possible for Neil Hartnell to crawl any farther up Franklyn Wilson’s arse. Yet, somehow, he has managed. Must have required an entire tub of Vaseline.