Alicia Wallace: We Won’T Go Away And The Questions Won’T Stop Just Because You Treat Us With Contempt 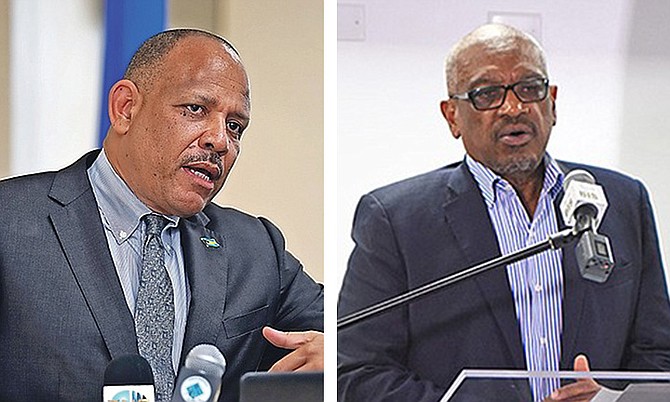 The resignation of Dr. Duane Sands as Minister of Health has come up again. We all still had questions about what happened to lead to that action. We heard there was a breach of protocol, but never a description of the breach. How did Sands overstep and who else was responsible for what took place?

Prime Minister Hubert Minnis had not held a press conference for more than a month, giving the media no opportunity to ask questions about the issue. Two reporters asked specific questions about Sands’ resignation. The second reporter made it clear she was repeating the question because it was not answered. Minnis took great exception to being asked to answer the question many Bahamians have been asking for weeks.

“Allow me to repeat. That matter was discussed ad infinitum in the press, so that matter is finished, okay? We are moving on, trying to get our economy running, trying to deal with this pandemic, trying to get people out, functioning, working, and have food[…] That is our priority today.”

Minnis’ rudeness and obvious resentment toward members of the press is not new. It is clear he regards them as enemies when he is his own enemy. He is given opportunities to provide information, demonstrate competence, correct missteps and give the impression he is interested in governance that sees the people and welcomes them to participate. In most cases, he chooses to do the opposite.

There were 46 days between press conferences. Not only did he not hold press conferences as the Prime Minister and “competent authority,” but he refused to participate in Ministry of Health press conferences when he has appointed himself the Acting Minister of Health. It was obviously a deliberate move to distance himself from us by keeping the press from accessing him, quite possibly because he did not want to answer the question everyone has had for weeks — What was the breach?

We have a Prime Minister who does whatever he wants, speaks to people as he likes and compelled the Minister of Health to resign during a pandemic. He is easily threatened, afraid of being challenged and strangely unabashed in his cowardly behaviour. He finds it easy, however, to speak gruffly with the press. “That matter is finished, okay?” No, it is not okay and it is not finished. The series of events took place, but it was not “finished” just because he wanted it to be. We still, at that point, did not know the precise reason for the resignation. As the person holding the information and controlling anyone else privy to it, he had the ability to shut the conversation down before it even started. He decided not to talk about it and to not only state he was not going to discuss it, but suggest the rest of us need to get with it, because it’s over.

“Moving on,” they say

He has decided that we are “moving on” which is familiar phrasing. Minister of Tourism and Aviation Dionisio D’Aguiular, when asked about the same series of events, said: “I think honestly that enough has been said about this[…] I’ve moved on. I think we should all do the same.”

Moving on is encouraged when the government does not have answers it would like to share. It is a dangerous rhetoric that reveals an even more dangerous idea — that issues do not need to be resolved, the public does not need to have complete information and once enough time has passed, the government can pass off the refusal to answer questions as a reasonable response to an unreasonable circumstance. The government tries to paint the press as the unreasonable entity.

Has there been a lot of discussion about the swabs, the alleged breach, the resignation of Sands and the unpopular acceptance of that resignation by the Prime Minister? Yes. Have the questions been answered? No. That is until Sands revealed details on the series of events earlier this week which were both illuminating and troubling. It is a confusing story that points to the unregulated power in the Office of the Prime Minister and its questionable practices which include preparing statements for the Ministry of Health briefings as well as Sands’ own resignation.

In addition to the concentration of power in one office, one of the biggest issues we have is our government — not only this administration, but it is certainly included — consistently tries to convince us, with some success, that it can only handle one issue at a time. It boldly states this as though it is acceptable. When we demand more, it chastises us for expecting so much of it. Political parties seem to be convinced of their own power only when campaigning. When they become the administration, they are suddenly weak, tired, overworked, underpaid and incapable of dealing with more than one issue at a time. This needs to be actively and strongly rejected.

We do not have the luxury of addressing one issue at a time. In this moment, we are dealing with the aftermath of Hurricane Dorian and the COVID-19 crisis which, on its own, has several layers including public health, the economy and social wellbeing. Those are just the issues at front of mind, many others exists below the surface. As soon as a government complains that we expect it to do too much as related to dealing with real and pressing issues, we must be aware that it is unprepared to do the job and determine next steps because that is not only unacceptable, but dangerous.

We must know by now the representatives we elected do not respect us. We have have seen cabinet ministers follow the lead of the Prime Minister, refusing to engage the press respectfully. We know the Prime Minister stopped holding press conferences for 46 days in the midst of a crisis. They believe we are only deserving of the information they are willing to share at any given point in time.

Pay attention to the way government actors engage the press. Note the questions they do not answer. See the attitude. Determine whether or not these people are truly working for us. Sometimes it is hard to tell, but most of the time it is hard to miss.

As things return to some version of normal, it is important to remember COVID-19 has not gone away. Restrictions are being lifted and, while many of us are ready to return to our regular activities, the new situation does not make much sense. There is no denying it is risky to let people enter the country without being tested for COVID-19. Why have we endured months of curfew and lockdown only to expose ourselves to people from places that did not implement the same or better measures?

We have flattened the curve. We have successfully made The Bahamas a relatively safe destination for tourists and we are opening to them. It remains to be seen how tourism will be made safe for Bahamians, especially those working on the frontline in the industry. Maybe the government has decided that the rate of infections is low enough now for the health system to handle the cases it knows will emerge once the borders are open. Maybe it has determined there will be more waves of infections and it is worthwhile to allow U.S. dollars to come until then, even if it contributes to the next wave of cases. There must be metrics. We just have not seen them.

Wear your mask whenever you leave your property or someone enters your property. Ensure that it covers your nose and mouth. Do not touch it except to remove it when you return home. Every time you touch your mask, you are potentially touching the COVID-19 particles it is meant to trap and this is one of the reasons you should keep the mask on even when in the car by yourself.

Wash your hands. Use hand sanitiser when you are not able to wash your hands, but not as a substitute. Behave as though the virus is on everything. The return to work and opening of the borders does not mean the threat is gone. It means we accepted the risk and need to take responsibility for our own health and that of the people with whom we come into contact.

I know excellence in journalism when I read it and find myself obliged to tip my hat and slightly bow to Ms. Wallace for her support of the free press and its importance to all of us.

"roc wit doc" is full of himself, He has appointed himself King of the Bahamas. The Bahamian people voted for him and his party in large numbers. So they should be very happy with what ever he does.

I say good for all of them. doc ways and his looks are one and the same.