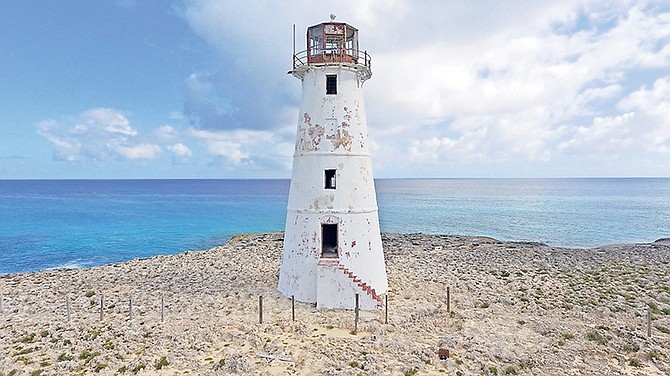 The Bahamian entrepreneur behind the proposed $2m renovation of Paradise Island's lighthouse yesterday said he refuses to continue "begging like a Jonser" after taking his battle with the Government to court.

Disclosing that he has hired Wayne Munroe QC to lead his action, Mr Smith vowed he is "not going around the Mulberry Bush again" after efforts to obtain all necessary approvals for his 'beach break' destination - complete with lighthouse history, tours and Bahamian culture - went into their ninth year.

Venting frustration that his plans, which would create 40 Bahamian construction jobs and a similar number of full-time posts, had been dashed just when his goal was in sight, Mr Smith argued that the Minnis administration's failure to honour the Crown Land Lease sends "a very dangerous message" to both the local and international investors that are desperately needed to revive the economy post-COVID-19.

With the necessary financing in place, the entrepreneur said he was "ready to begin mixing mortar" as soon as the Government gave the go-ahead. However, while promising that he will "never give up" on his ambitions, Mr Smith said he was unwilling to proceed while Carl Bethel QC, the attorney general, held the position that his Crown Land lease was "not valid" and cannot bind the Government.

Mr Bethel declined to comment when contacted by this newspaper last night, but Mr Smith's writ - which was served on the Attorney General's Office on Monday, after being filed with the Supreme Court registry on May 18 - is grounded in the Crown Proceedings Act's Chapter 68.

The Bahamian entrepreneur is seeking a Supreme Court declaration that based on the letter he received on January 7, 2020, "there is a concluded agreement for a lease between the plaintiff and the minister responsible for lands and surveys".

That minister is the Prime Minister, Dr Hubert Minnis. Should the Supreme Court find there is no valid or binding lease agreement, Mr Smith's writ alternatively seeks damages for its breach. The letter in question, from Richard Hardy, acting director of Lands and Surveys, was headlined “approval for Crown Land lease” over two separate parcels.

One parcel was two acres in size for the Paradise Island lighthouse, and the other three acres represented the ‘beach break’ element. Mr Smith returned the lease, bearing his signature and other formalities, to the Government on January 9, but the latter failed to apply its signature and execute the lease, and as a result is arguing that no binding agreement was sealed despite him also possessing Bahamas Investment Authority approvals.

The Bahamian entrepreneur is seeking some of the same Crown Land being eyed by Royal Caribbean Cruise Lines for its 'Royal Beach Club' destination, which is why many observers believe the Government held-off signing the lease agreement even though Mr Smith's proposal pre-dated the cruise giant's plans by some years.

Having previously voiced fears that he was being "marginalised" by the Government in favour of a major foreign investor, and squeezed to accept inferior land parcels at Colonial Beach, Mr Smith yesterday argued that his treatment showed the Minnis administration's rhetoric about it being "the people's time" and "Bahamians coming first" was not borne out by its actions.

He added that the writ's filing prevents the Government "negotiating with any party the land in contention", implying that no Supreme Court injunction is necessary to prevent it sealing a deal with Royal Caribbean - which has already indicated its Paradise Island plans have been delayed by the COVID-19 pandemic - in the meantime.

"We are seeking for the Government to honour the agreements they have put in place, namely the Crown Land lease," Mr Smith told Tribune Business. "This is because I have been begging for eight years. I finally get it resolved in the form of a Crown Land lease on January 7, and I only have six weeks to rejoice that I reached this milestone before Carl Bethel tells me it's not valid.

"I've tried begging... begging like a Jonser. I've tried asking nicely. I'm not going around the Mulberry bush again. I've dealt with 100 top government employees, gone through 14 agencies, and Royal Caribbean walked through the door of the Bahamas Investment Authority and didn't have to wait for eight years.

"It's an unlevel playing field for Bahamians. I have faith in the courts that this is going to come to a logical, reasonable conclusion where the Government is required to honour the Crown Land lease in place. While Carl Bethel unfortunately does not have a very good track record in winning cases, I'm very confident in Wayne Munroe QC's ability to win cases against the Government."

"The way the Crown Land lease was offered was through a Cabinet approval in co-ordination with other agencies, including Lands and Surveys. Carl [Bethel] can argue all he wants to the judge. Do they want to string this Bahamian along through the courts even longer, or get Bahamians back to work without this litany of excuses?"

Asked whether his ordeal will cause other Bahamian entrepreneurs to think twice about getting into business activity that requires government approval, Mr Smith replied: "I'm completely lost for words in responding to that question.

Describing his dealings with the Government as "a nightmare", Mr Smith promised to eventually release the "thousands of e-mails, hundreds of written correspondences and thousands of phone calls" to demonstrate how hard he has worked in trying to realise his investment dream.

Recalling how the Prime Minister e-mailed him to set up a meeting through his secretary, only for the latter to receive no instruction before he called, Mr Smith added: "The Prime Minister thinks the joke's on me. I don't have time for petty games.

Arguing that projects such as his were essential to revive Bahamian jobs and the economy following the COVID-19 pandemic, Mr Smith said: "How else are we going to get out of this economic hole we were in even before the pandemic and before Dorian. The private sector is working hard to attract the right foreign direct investment, and the Government is doing a unique job in souring relationships and the efforts of Bahamians.

"It’s a real shame that entrepreneurial Bahamians must go to the extent of taking government to court for opportunities to succeed. I'm ready to go. If they tell me start, I'll start tomorrow. But I'm not building on foundations that are shaky when the attorney general tells me my documents are not valid. We have the country’s commercial reputation at the hands of one person?

"We need it resolved so that we can start mixing mortar and get Bahamians employed in meaningful jobs. I think it's abundantly clear to right-minded people that it is absolutely imperative to have a project such as ours that attracts foreign currency that stays in the country, whereas projects such as Royal Caribbean's take all the profits out."

Pledging that his project will require "zero work permits", and will explore an initial public offering (IPO) of shares long-term, Mr Smith added that his plans called for an inclusive development that welcomed Bahamians and tourists alike as opposed to the cruise line's likely "exclusive" destination.

You must be kidding! Any and everyone can win against that dishonest mangy potcake we now have as our attorney-general.

This AG is such a pompous ass! He really needs to go.

I guess now that this is in the hands of lawyers, this project will be stalled for many years except maybe the building on PI of some big mansions for the same attorneys.

Cruise lines will be fast tracked in mere months with full signed and sealed approvals, when Mr. Smith has been trying for this for SEVERAL years...that’s the big disappointment there.

*'Island Names Does Matter!
Shouldn't come as no surprise that Paradise Island's grand Lighthouse's ghost does cry out be handed back its rightful Hog Island name.
The Lighthouse has stood tall since the year 1817 withstood the ever-changing wheeling-dealing winds the likes the dealings the Bay Street Boys, UBPs, UBP's turned red coats, PLP's and so will do likes comrades, Mr. Minnis and Toby. Nod one for yeah, Twice for no?

Why is anyone surprised? The whole Crown Land issue is not for Bahamians. It is for politicians and their hand-picked foreign clients. There are many people I know on Andros who have applied for Crown Land ten or twenty years ago and still haven't heard back. It is a cruel joke this Crown Land business.

Ha! I've got family in Abaco trying to get a 20 ft by 60ft strip of Crown land adjacent to their own for better than 50 years! absolutely useless to anyone else except Government, to hold over someones head. Go for it Toby. I wish you the best.

The people who should be truly upset are Junkanoo Beach and Arawak Cay vendors, if RC has its own beach location in Nassau this will take business away from Junkanoo beach and Arawak cay.... unacceptable. The impacts are much farther reaching than just one man and 40 jobs.

Best of luck Mr. Smith and glad that you have funds to fight the case. Dealing with the case will likely to have majority of Politicians supporting you in private but will find ways to not assist even though your case is clear cut. There are many really egregious, blatent wrongs which is well known and abroad but there is no help to correct. So good luck and after growing older and winning then join the back of the line with the authorities telling they havd no money to pay. Thank you for the ability to continue to stand up.

You are absolutely right.