'Awesome' Sands Is Backed By His People 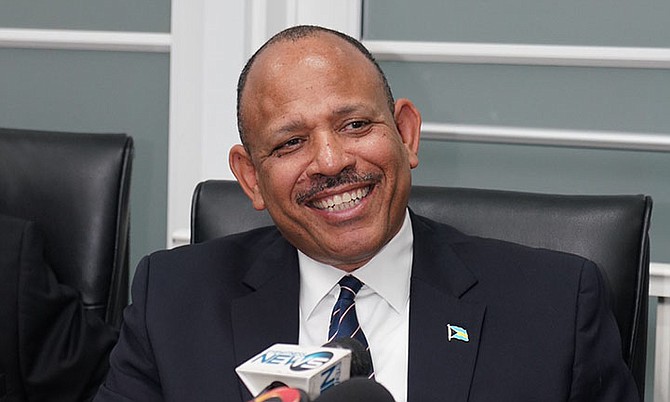 DAYS after former Health Minister Dr Duane Sands criticised his former Cabinet colleagues over the handling of Hurricane Dorian victims, members of the Free National Movement's Elizabeth Association have come out in his defence.

Sandra Stuart, a resident of Elizabeth and a member of the association, said she fully supports Dr Sands and has seen him grow over the years.

"Dr Sands has been an awesome MP for us in Elizabeth," she said. "He has brought Elizabeth a far way. Whether he spoke out then or is speaking out now, we fully support him, unconditionally. It's supposed to be the people's time and the people want to hear the truth. So I have no problem with him speaking out. The matter of Dorian was handled poorly and that is a fact so why people want to get mad because he said so. I think he would be a good leader of the FNM. He was a novice just like the current Prime Minister. He was thrown into the ocean and someone yelled, 'swim'. He has been swimming ever since."

Ms Stuart said she finds Dr Sands to be compassionate and a good listener. She also said she is sorry that he is not minister of health anymore and she is still waiting to see the "fine print" as to why Dr Sands' resignation was accepted by Prime Minister Dr Hubert Minnis.

Another constituent and member of the Elizabeth Association, Larry Pinder, also supports Dr Sands and recalled how the surgeon has encouraged him in his own life.

"He encouraged me to get my business licence in landscaping, lawn maintenance," Mr Pinder said. "He also pushed me to pursue many other things. So on a personal note, I have to say thank you to Dr Sands for pushing me to be an entrepreneur, a hard worker and a family man. Naturally I support him."

Another association member, Anieka Major-Hanna, said it is unfortunate Dr Sands' resignation was accepted during the COVID-19 pandemic.

"The acceptance of his resignation was unforeseeable and unfortunate for our country leaving us in a vulnerable state during a worldwide pandemic," she said. "Dr Sands speaking out shows his integrity and dedication to the people of our country, displaying that doing the right thing in following protocol is better than not doing anything at all. I applaud him for his commitment in bringing forth information and questions people want and need to know.

"The true test of a man's character is what he does when no one is watching. Dr Duane Sands, is a giant of a man, articulate, intelligent, affable, a man of integrity, and a true visionary. Dr Sands has proven to be knowledgeable not only about the health and medical aspects of the country, but in other areas that are important for good governance."

Dr Sands resigned last month over his actions related to the arrival of six American permanent residents into the country with COVID-19 test supplies, but who had not been tested until a day after their arrival. He initially told this newspaper he had no plans to resign, but did just that a day later.

During a recent interview with a local daily, he suggested he resigned after a letter, which he did not write, began making the rounds on social media. That letter stated Dr Sands had been "deeply apologetic" and offered to resign, however Dr Minnis "graciously refused to accept it". Dr Sands said he was angered because he had no input in the later. He released his own resignation letter about 30 minutes later, which Dr Minnis accepted.

He has since been making media rounds. While a guest on 96.9 fm radio show, Paradigm Shift, on Tuesday, he was asked about unanswered questions about bodies of victims in the aftermath of the storm. Dr Sands has called for full accountability in the matter.

"I want us to give a full accountability of the entire situation," Dr Sands said. "We have to report to the people... How we deal with this is critical. This is our George Floyd situation here in The Bahamas."

Dr Sands said the handling of bodies of Dorian's victims was taken from his portfolio before he resigned and turned over to the Office of the Prime Minister.

Comrade Dr. Duane is a world-renowned, awesome heart surgeon but even with that pedigree, he couldn't be protected from being fired as a crown minister for health, by a colony-wide re-known heartless doctor of gynecology OB-GYN, which when it rolls off tongue it does sounds pretty damn close the pronunciation that fakery signatory O-BAN. Just can't make this stuff up. Just, can't, OB-GYN, OBAN!** Nod Once for Yeah, Twice for No?

There are more than 3 people in Elizabeth, Dr. ... one can't be an MP or PM without a seat!

He is trying to launch his coup 2 years too early. What a dimwit!!

Anyone remember what he did to Loretta Butler.She still waiting for him to come on stage.

My red snitches at the red coats July 2116 convention had it that Dr. Duane ran up his hotel suite exactly as KP was rebuking him live on stage.
While prepping to go on stage to address the delegates, Loretta's agents had searched the hotel throughout for her deputy leader candidate to join her but saw no sign anywhere about the hotel of the in seclusion Dr. Duane.
'Twas the same July 2016 convention promising law and order party by all red coats elected or politically appointed. They were talking about a tough new anti-corruption system would come into play immediately upon being elected to govern. They said the new law goin' mean, “If any red coats elected, or politically appointed do wrong, the Royal Constabulary will have the power to go arrest them. Nod Once for Yeah, Twice for No?

This man was a Trojan Horse and a Wolf in Sheep’s Clothing in our Prime Minister’s Cabinet. It is unfortunate how a taste of political office often times inflates the ego of mediocre politicians. This gentleman might be a good heart surgeon but he is a heartless individual. Just to think that he wants to bite the hand that fed him is just too much to fathom and understand.

When egos become inflated by media flattery, wannabe political leaders tend overlook the skeletons in their closets and hope the public will never find out.

This deceitful and ungrateful man’s closet is filled with enough skeletons from his nefarious past including those of the numerous deceased persons his so called Dr. Christian Barnard type skills failed to save.

Egomania is a cardinal sin and stupidity is the hallmark of an easily flattered person.

Rally around our Prime Minister and stop this vulgar quest for political leadership.

What a croc of horse manure....

If he is leader of the FNM come next election I will vote. If not I will not even register...