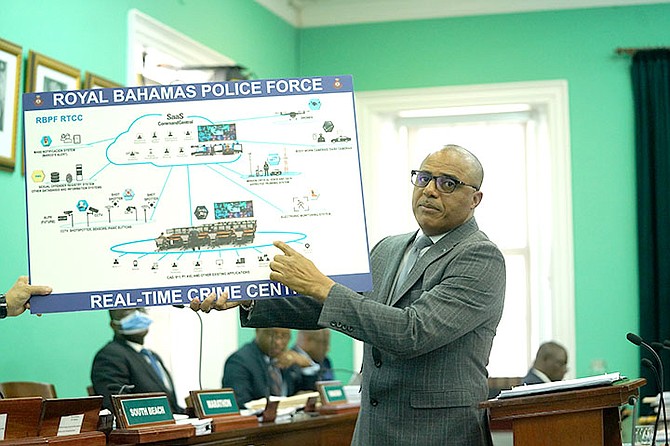 THE long-awaited body cams for law enforcement officers are now in the country and are expected to be officially rolled out by August, National Security Minister Marvin Dames revealed in the House of Assembly yesterday.

In the meantime, the minister said officers will continue with virtual training until the “cutting edge” equipment is fully implemented in the system.

Giving his budget contribution in Parliament yesterday, the Mount Moriah MP said: “Mr Speaker, in February of this year, $688,561 was invested for 200 body worn and 200 dash cams for patrol vehicles. The technology is now on island.

“They’re now on island and in order to meet our projected roll-out period, training is continuing online and this is as a result of COVID-19 so we don’t want to lose any time. Meanwhile, the singnalling units for the dash cams have been installed in the new police vehicles; $232,357 will be invested during this month while the duplicate amount will be paid during the upcoming fiscal period for maintenance. Mr Speaker, this cutting edge police technology is expected to provide critical evidence for both internal and external investigations. It is anticipated that projected roll out period will be August of 2020, not long now.”

The minister’s comments come amid public outcry against Saturday’s police involved shootings, which left three men dead in Cowpen Road. Their deaths brought the country’s police-involved killings for the year to eight, according to this newspaper’s records.

Police said an officer was “ambushed” by gunshots from the suspects, who were in a dark tinted car, prompting police to return fire and fatally wound the men. No officers were injured, however. Relatives of the three men do not believe they fired at police.

Yesterday, the minister said officials have been exploring “less than lethal devices” for police officers, adding that further information on the matter will be provided to the public at a later date.

“I will wish to advise the public that we have been exploring less than lethal devices for the use by our police officers. . .We will keep the public informed of the implementation of this,” he said.

Mr Dames also said during the period of January through the end of May, crime fell by some three percent compared to the same period last year. However the country was under a lockdown and curfew beginning in mid-March due to the COVID-19 pandemic, and some observers feel this contributed to a slow down in crime during the period in question.

He also said: “Mr Speaker, of the 31 recorded murders (from January until the end of May), 20 or 64 percent were on New Providence; eight or 26 percent were on Grand Bahama and three or ten percent on the Family Islands. Irrespective, Mr Speaker, of the islands, the murder count in the Bahamas continues its downward trend, which means that our investments are paying dividends.”

According to Mr Dames, the police statistics show a considerable percentage of the murders were motivated by conflict or retaliation and drugs.

“Approximately 32 percent of the murders were motivated by conflict or retaliation,” he said. Meanwhile, “19 percent was motivated by drugs, according to police statistics.”

“Of all of the murder victims, 26 persons or 84 percent were males and the remaining females. Of the total victim count, 20 persons or 65 percent were prolific offenders known to police.”

“…The high propensity of men being killed has an historical precedence in The Bahamas, similar to the global trend. Men between the ages of 15 and 29 are of the highest risk of becoming victims and most likely perpetrators of murders.”

Acknowledging the importance of seizing unlicensed guns in the country, Mr Dames said he was pleased to announce that over 100 firearms have been captured by officers to date.

In other crime matters, the minister noted that over 1,000 people have been arrested for curfew violations since the prime minister’s COVID-19 orders were implemented in March.

“From March 24 to May 1, 2020, there have been 1,134 persons arrested and charged, Mr Speaker, for curfew violations. Approximately, 783 persons or 69 percent of the violation was on the island of New Providence.”

Interesting how money is always available to quiet public outrage (I don't believe they were ordered in February).

This is a token act. The cameras will never work when necessary to undermine police, but will always work to justify their "being in fear of their lives". Another waste of money!

200 body cameras. How many officers are there? What is the consequence if an officer does not turn on his body camera?

Then we can have our own cops tv show and raise money for the force.