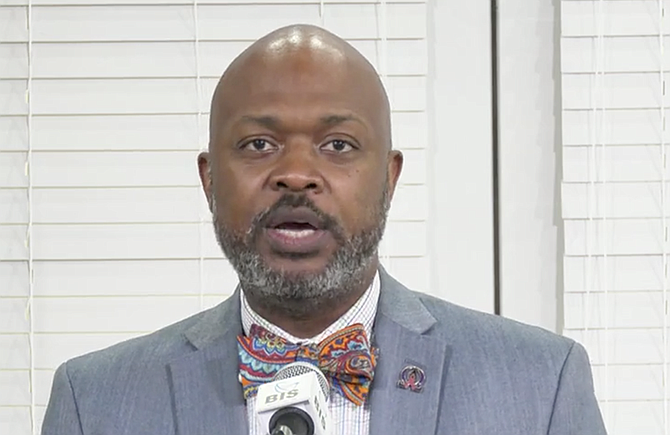 HEALTH officials have recommended that residents travelling outside the country for “a short period” of time do not need to produce a negative COVID-19 test to return home, Deputy Chief Medical Officer Dr Delon Brennen said yesterday.

Noting that suggestions have already been made to the government on the matter, Dr Brennen told The Tribune that health officials have no issues with short-term travellers not having to take a COVID-19 test to return to the country. However, he said the final decision on the issue would have to be made by government officials.

This comes after Tourism Minister Dionisio D’Aguilar announced last Wednesday that resident and visitors will need a COVID-19 negative test result to enter the country once commercial international travel resumes on July 1.

Since the announcement, there have been calls for clarity as it relates to the testing protocols for short term travellers.

Asked about the issue yesterday, the deputy chief medical officer said while officials do not see the need for requiring short term travellers to present a negative COVID-19 test to return, there should still be several guidelines implemented for travellers to follow in an effort to minimise potential exposure.

He said: “The recommendation of the Ministry of Health is that if individuals are only traveling for a short period like 24 hours or 48 hours, then we have no issue with them travelling during that time period and then returning to the Bahamas not having had a COVID-19 test.

“But because they’ve had an outside exposure, we would ask that they pay attention to their symptoms and minimise their exposure so that if they do end up being COVID-19 positive, that we’ll be able to detect it as soon as possible and they wouldn’t have to expose a lot of people so we don’t want restrict people travel.”

Yesterday, there were no new reported COVID-19 cases in the country, with the total remaining at 104 for seven consecutive days.

According to Dr Brennen, the small number of cases reported in recent weeks show there was not a major community spread in the country as initially believed.

He said: “So, far the most part, we’ve only had a very small number of cases that have come about in all of those cases that had been related to clusters that had we have known.

“…They’re not showing up with spontaneous community cases around the country, definitely not in Grand Bahama or in New Providence or Bimini where we’ve had known cases which means we don’t have the amount of community spread that we thought could’ve been occurring at this point , but that’s all encouraging.”

Despite there being no influx of cases of late, Dr Brennen noted that it’s still important for Bahamians to remain on their guards and adhere to the health and safety protocols.

He said: “None of us are telling people to let their guards down but our process is we have done very well with the measures that have been put in place so far. Continuing those measures will get us to a place where we will continue to see less cases.

“Unfortunately, if we let our guard down at this point, the likelihood is we will see an increased number of cases come out of that change in philosophy.”

Asked yesterday about concerns of the country experiencing a second wave of the virus once the country full re-opens it borders, he replied: “What we are trying to do as health officials is continue to monitor the situation and the way we are opening our borders, I think our recommendations have been taken into account and I think we will appreciate if it was not changed to a point where we no longer require people who are coming into the country to have COVID-19 negative test.

“And that was taken into account and now we seen that by both the competent authority along with the tourism authority that we will continue to ask that those who are coming into to country that they have COVID-19 negative tests so that is encouraging for us.

“We know it is not eliminating all risks because as long as you have other individuals who are coming into country, there is a possibility that they could be infected, but minimising their possibility of being infected by mandating that they have a COVID-19 negative test is one of those things that is going to help us out to minimise our risk.”

Really smart, you can just go pick up the virus and come back home! Nice. Do these guys even think, are they really doctors?

Why no antibody testing? At lest if antibody positive you can have more confidence that they should be okay for a while.

Its sad that in a crisis like this we have no choice but to listen to these idiots!

Our leaders have already said no need for mass/more tests and contact tracing is enough.

... our leaders also said that only one person on Cat Cay has COVID-19. How can only one person anywhere have covid? I also know persons who were exposed to persons diagnosed with covid who were never contacted through the contact tracing program so I know that is a joke! I also know persons who called the covid hotline (early in in the pandemic)with classic symptoms and were told to stay home and self isolate and were never tested! Leaders lie and manipulate and when incompetent, they definitely cannot be trusted!

This is utterly ridiculously.....absurd to the point of disbelief. Minnis as minister of health has absolutely no clue what he's doing. South Florida is a major hot spot for Covid-19 infections right now with a huge spike in hospitalizations. No one should be allowed to gain entry to our country without a recent Covid-19 test in hand. Frankly, opening up our borders to travel to and from Florida anytime soon is tantamount to inviting a major outbreak of the deadly China virus to our shores.

It certainly seems after months of his curfew and lockdown orders, Minnis no longer cares about the more vulnerable elderly and others in our society with pre-existing medical conditions like diabetes, high blood pressure, heart disease, etc.

And why is Brennen carrying Minnis's water? Is this an effort by Minnis to distance himself from a major second wave of Covid-19 in The Bahamas as a result of his decision to re-open our borders at a time when most states in the US are seeing a serious up-tick in Covid-19 hospitalizations, especially in the South Florida area?

Anyone know how much longer Minnis intends to remain in hiding from the free press after the royal shafting he apparently gave Dr. Sands?

From June 19th: "Jamaica has recorded 14 new cases in the last 24 hours, with all 14 being imported cases coming from the recent flights from the United States. Jamaica now has 184 actives cases of COVID-19."

It seems we're going to be headed in the very same direction as Jamaica and Florida, only the lowest of fools would dare try to reopen our borders to Communist China and the U.S which is now the prime China Virus Hotspot

How close is it before approaching when be's dangerous people who be's calling the decision shots during invitation for killer field times to come to visit our shores and brungs your USA bucks?!
Ever since the former comrade health minister got Mr.Minnis canned, the rush to push aside a killer virus to March On, Colony Towards Swungin' Open We Borders has become the new national anthem of The Colony of 700 Out Islands and Cays.
When can we expect the crown's real health minister to step forward by showing his face? Nod Once for Yeah, Twice for No?

What utter nonsense! Yet another idiot!

I associate myself with many of the comments above