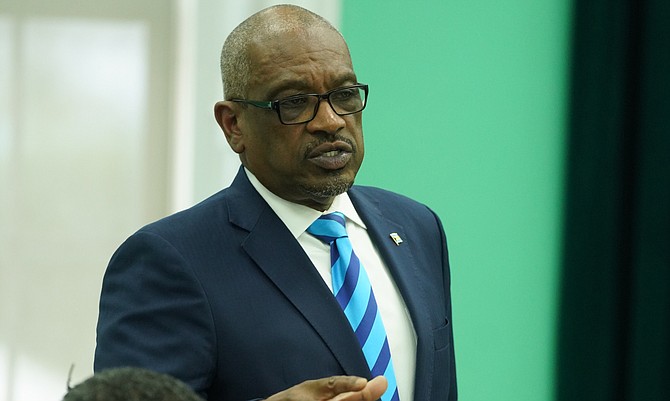 PRIME Minister Dr Hubert Minnis announced yesterday that New Providence’s economic empowerment zone will be expanded to now include Englerston and Montel Heights, expanding access for some to tax concessions.

“This zone will now extend south past Wulff Road, all the way to Independence Highway; east to Claridge Road; and north to Collins Wall,” he said.

He said 90 applications have been made under the Economic Empowerment Zone Act to date, 50 of which have been approved.

“This has resulted in a total of approximately $1.246m in business licence, customs duties and real property tax concessions being provided to these businesses,” he said.

“To further aid in the economic empowerment of residents in the Over-the-Hill community, the Small Business Development Centre designed and implemented two special groups of residents from the Over-the-Hill communities to participate in SME programmes. The first group of the OTH programme was an eight week course open to 25 participants. Seventy-two percent of its participants were able to complete successfully and graduated July of last year from the course. Through this group, clients were awarded a total of $48,000 in capital assistance. The first group resulted in a capital infusion of $48,000 and represented an injection of approximately 42 jobs to the labour market.

“Total sales for all participants were $2,301,014. The second group of the OTH programme graduated in November 2019. This group doubled its class capacity, increasing the number of participants from 25 to 50. This group had a success rate of 62 percent with 31 of the participants successfully completing the course and graduating. The second group of the OTH programme resulted in the capital infusion of $65,250.74 and represented an injection of approximately 100 jobs to the labour market. Furthermore, projected sales for the clients totaled $2,520,662.56. Prior to COVID 19, preparations were being made, and will now be continued, for a third group.”

Dr Minnis also defended his decision to appoint an Economic Recovery Committee in April rather than rely on the National Development Plan which provides a roadmap for development. Dr Minnis supported the creation of the NDP when he was leader of the opposition but critics say the well-researched document has been sidelined during his administration.

“Let me dispel a misguided view that has circulated,” Dr Minnis said. “The Bahamas’ draft National Development Plan sets various developmental goals for our country. Hard work was put in to creating the plan. The foundation of that plan is based on the United Nations Sustainable Development Goals, which the Bahamas continues to pursue in various forms. Concrete work is stemming from elements of the plan by ministries of the government, and as key priorities under the work of the prime minister’s Delivery Unit... The work of this new Economic Recovery Committee is not a repeat of those efforts.”

“The National Development Plan is a long-term policy document created in pre-COVID times. The work of the Economic Recovery Committee is to come up with emergency policy recommendations now in the post-COVID environment. We are in a new world and a new reality requiring new ideas for this moment,” he told Parliament.

Curious where go to uncover evidence existence of what is about to be imaginarily revised and expanded for that what simply never did exist? Nod Once for Yeah, Twice for No?