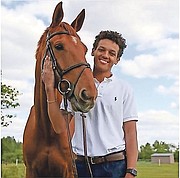 AGAINST the backdrop of civil unrest being played out across North America in recent weeks, questions about underlying ideals and values and systemic discrimination are being raised… not only regarding race, but also in gender and in other forms. Athletes in various sports have spoken out on this topic. Last week, Equestrian Bahamas participated in a virtual Zoom discussion about diversity and inclusion in horse sports which was hosted by Heels Down Magazine.

The discussion featured four Black equestrians who shared their experiences as horseback riders in America, and their ideas on improving diversity and inclusion in the sport. The panelists represented a cross-section of black participants in equestrian sport, including an amateur rider, an agricultural entrepreneur with over 15 years horse experience in reproduction and barn management, a successful trainer and activist, and a professional Grand Prix rider.

Mrs Bonnie Davis, secretary-general of Equestrian Bahamas, participated in the Zoom discussion and described it as “an eye-opening experience”.

One hot topic of discussion was the financial constraints which pose a major challenge for Equestrian athletes from all small island nations, particularly athletes aiming to compete at the highest levels. These challenges can be met through stronger support at the corporate levels. During the panel discussion Davis addressed the issue of sponsorship, noting that, “Many of the large equestrian clothing companies, for example, have limited diversity…how do we change this mindset?”