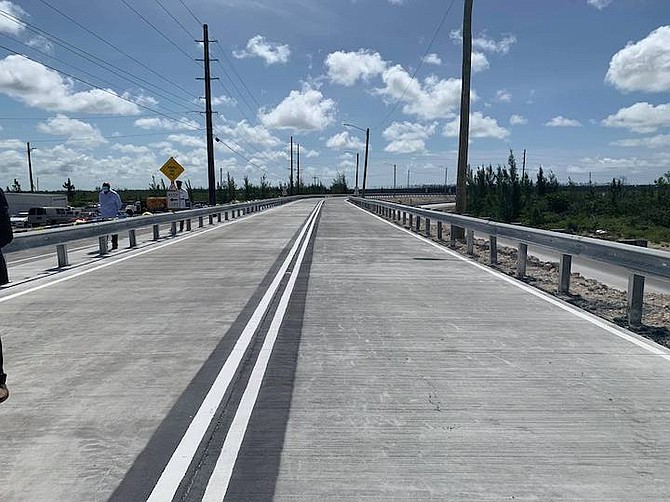 The Fishing Hole Road Causeway in Grand Bahama pictured on Friday. (Photo from The Office of the Prime Minister's Facebook page)

The original causeway was built in 1957 but Dr Minnis explained that devastating storm surges of past hurricanes caused large sections of the road to be washed away and made daily commuting difficult for motorists.

Before giving official remarks Dr Minnis attacked Opposition leader Philip “Brave” Davis and other members of the opposition who visited the causeway on Thursday.

In 2015 under the former Christie administration a contract was awarded to All Bahamas Construction to replace the Fishing Hole Road embankment with a raised causeway.

Dr Minnis said: “With the change of scopes the project required additional funding. The situation was exacerbated, due to the combination of a number of events, including but not limited to the delays and devastation caused by the past three major hurricanes, including Matthew in October 2016, Irma in 2017, and most recently Dorian in September 2019. Unfortunately residents were left to suffer through very difficult driving conditions. Prior to Hurricane Dorian, the Fishing Hole Road Bridge was substantially completed and authorities were planning to officially open the bridge in September of 2019. Even though, Hurricane Dorian did not affect the concrete bridge structure which was a testament to the quality of the work, the approach asphalt roads and side slopes were destroyed. After witnessing the affect of Hurricane Dorian we decided to replace the asphalt roads with 8” thick reinforced concrete rigid pavement, and the side slopes and shoulders with 6” thick concrete making the whole structure more integral and climate resilient for future storm events.”

Dr Minnis said residents now have a “modern designed, resilient, concrete Trestle Bridge, spanning 900ft across the Hawksbill creek with a life span of 50 years, sitting 12 feet above the mean sea level, and able to withstand hurricanes up to category 5 intensity.”

The total cost of construction is $9.2m, he said.

12ft is still too low. Another storm makes the bridge impassible. How then do people get out of the west? It should have been raised to the heights of the other two bridges on Grand Bahama. However, that is always how western Grand Bahama is treated by all governments.

LORD look who talking about low. A man who is in a ditch and continues to dig.

You should have invited the opposition to the opening seeing it was their vision. and you and you cabinet lack vision.

What vision? To build a bridge that couldn't survive the passage of one hurricane? Besides, it is vision to provide the basics that you citizens need. It is common sense.

Insufficient piling size, bridge too low, Ignoring the engineering report, asphalt floated away, I'd love to see the shingle trail on that one.

This is the best outcome, based on the 2016 contract and work done by the PLP. Now they need to remove ALL of the old road so that the Creek can flow better

They can't. Causeway can't handle the weights that are so often towed thru that area....

They need to remove the old road now, or the flooding will continue...

But the bridge isn't able to handle the weights the shipyard, B. Rock and Container Port will require....

Thid is a PLP design and it does nothing.

The FNM though are building a new bulkhead at Clifton to contain a decades old oil leak. Lol. They aint fixing the leak mind you, just the bulkhead. Lol. You literally can't make this stuff up....

We're screwed, our choice is dumb or dumber....

This crossing has been increasing challenged by strong force hurricane currents and creates hardships to residents when roadway is flooded.

For decades the political groups have made it political points dilly dallying over bridge solution to better residents lives. Lots of valuable political governance could have moreso taken place over host of over challenges to better the lives of Bahamian residents and businesses on this island. Right to safe reliable roadways is not politics.

The causeway or bridge joins the vital roadway over a waterway which has been blocked a short distance upstream which just goes nowhere. The bridge is at a bottleneck position and has around some 5 current inlets from the ocean funnelling large volume of water to this bridge point. And from blocked water path just past the bridge water builds up and flooding.

The geography of the area needs to be studied. The bottleneck should be just filled in as the blockage just causes water to pile up until water goes over lowest embankment. Little value if bridge is highest but surrounding land including road is flooded. A possible solution seems to be dredging coastline and creating embankments, dams to protect Airport straight past Queens Cove and further down. Seems the low gradient coast same side needs building enbankment to reduce flooding and danger to businesses in area. Another view would be the open up blocked channel by bridge and build up banks of channel to have water flushed out from one side of island to other side vise versa reducing water build up at bridge point.

From what I see all they need to do is remove the old road and the water should flow properly with no flooding.

But believe me there is no where a dam can be built to correct this area's issues...

First you must pull up satellite images or flood zone risk map, googlemaps, and look at the coastline to see possible route to put dam or embankment or rubble wall or reinforced elevated dam. Nassau Harbour was dredged years ago and fill funnelled to enlarge Kelly Island or Bahamas Customs Area. Bimini created dock space. Numbers of maps ariel view in Nassau have ocean shores dig up for fill. Nygard Cay was built uo into acreage from other areas. Looking at iariel sland maps gives other vantage points to consider for options. What seems to be in the mix are experts one political party has their solution, another has another.They all have limited budgets and each wants to have the stop and review of the other. Quality or half baked, or irregularities exist in projects like half mountain graded down and no clinic, huge hospital clinic for Cat Island cancelled by present side, huge baseball stadium built without key functional parts started around 9M now going on some 50M, subdivision works now in litigation, waste treatment plant Gladstone Rd some 2x costs, further down road old former Supermarket bought and then discovered not suitable for post office, sea walls not up to standatds contractor dismissed, school built inferior too expensive to redone, airport built reeded longer runway and structure needing more works..all hired and done by qualified experts costing hundreds of millions of taxpayers dollars and less benefit in cases to population and on and on...I believe a govt member recently has some acquiring the Airport and I believe shoring up areas to minimize flooding. Grand Bahama has one of the designed cities in the Caribbean and should be fully supported in works to keep the engine Freeport employing people. Regretably over the years dozens of businesses closed, thousands of residents left, hundreds thousands pf jobs no more. Many of us were the innovators, employers, created hundreds of jobs but no longer exists in GB.

Proudfnm, should have the GB experts have a look at Holland and its success in surviving best flooding. Some of the US areas have some Dutch designers working with them. Thanks Proud fnm for your interest in having vision in improving GB and lives of its residents.

You have no idea what you are talking about.Please stop.