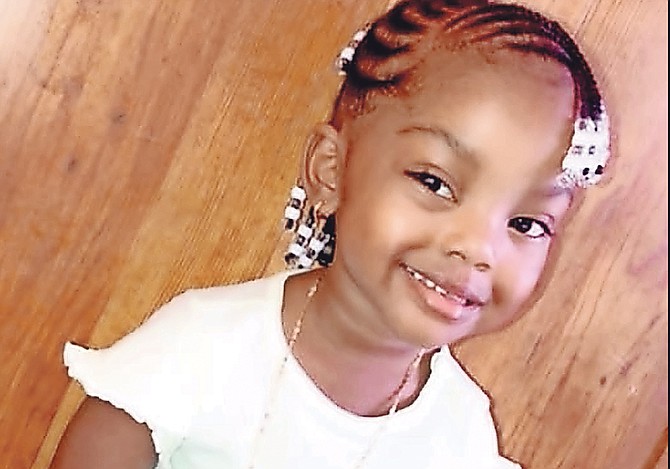 A RELATIVE identified the child as Da’Nyla Roberts.

A FAMILY is desperately appealing for blood donations for a two-year-old girl left in critical condition after she was shot by gunmen in Eleuthera on Saturday night.

A relative has identified the child as Da’Nyla Roberts.

According to police, officers at the Governor’s Harbour station received reports of a shooting shortly before 10pm at Baby Johnson Lane in Hatchet Bay.

Officers who arrived on the scene discovered a toddler suffering from gunshot wounds to the lower abdomen.

Initial reports noted that a woman was sitting on the porch of her residence holding her grandchild, when a vehicle approached the residence and three men exited.

One of the men, “after making a comment produced a handgun and discharged it in her direction and left,” police said.

Moments later, the grandmother discovered that her granddaughter had been shot.

The child was airlifted to New Providence for treatment.

Police said two male suspects have been arrested in connection with the incident and are assisting them with the investigation into the matter.

The little girl’s aunt, Daneyell Roberts told The Tribune the family’s emotions went “from 0 to 100” when the relatives received the call of her niece being hit by one of the bullets.

“They were saying at first it was a flesh wound… they were indicating they had her stable, they sedated her,” Ms Roberts said. “They flew her out on the emergency flight. She had surgery that night.

“After coming out of surgery this morning, I believed it was around between 5-5.30, she had internal organ damage to her lung, her spleen, her kidney, her liver and her bowels. They’re saying she’s going to make it but it’s going to be a long recovery time and we’re asking for O+ blood.”

The toddler was born in New Providence but spent most of her life in Gregory Town and partially in Hatchet Bay, her aunt said. The two-year-old splits her time between her mother and father’s families as a part of a joint custody agreement.

“The Saturday (that) just went - she was due to go back to her mother. So, her mother picked her up around the scheduled time between 9.30-10 o’clock. She picked her (up) and took her into Hatchet Bay,” her aunt recalled.

Ms Roberts explained both parents are in in Nassau with their daughter but due to COVID-19, they’re not allowed to spend as much time visiting her in hospital as they would like.

The Eleuthera shooting happened three weeks after a 10-year-old girl died in hospital due to gunshot wounds.

Lorencia Simmons Walkes, 10, died on Sunday June 7, more than a week after she was shot in the Carmichael area. The fifth grader attended Sybil Strachan Primary School.

She was among three people shot on May 29, after occupants of a gold coloured vehicle approached a group in front of a home at Belville Circle off Iguana Way shortly after 1pm, police said. Three men exited the car with firearms and fired gunshots at the group, according to police.

Anyone with information on these incidents is asked to call police at 502-9991/2 or Crime Stoppers at 328-TIPS.

... and there are idiots in this country who argue against the death penalty!!

There are idiots running this Country who couldn't care less about the violence and preponderance of guns in the hands of an overwhelming number of amoral men. They just keep increasing the burden of salaries and retirement benefits of a largely uneducated and mostly corrupt band of so-called law enforcement officers on the tax payers who largely seem content with the status quo....

Zero Tolerance !!! The only sure way empirical to enforce Zero Tolerance is to activate the Death Penalty to these wutless no good gun toting gangs who are terriorizing Nation goi g around just spraying bullets killing totally without regard to who they kill. The public got spraued with bullets at the junkanoo some time ago enjoying junkanoo, seemed little child got shot in house doing hpmework, recent incident where alleged some 3 shooters drove to Bel Air area and got out and sprayed group of people and little girl who wanted to grow up and become a teacher got killed, alleged gunmen followed car and killed man and his girlfriend, alleged young gunman kills man in store buying food and list to totally, senseless senseless, not caring for other people.

Time nuff to bring the Death Penalty to fully stop dese wutless gang murderers going around terriorizing population spraying them with bullets and even killing more lil children and adults than the quickly massive encompassing Covid-19 legal legislations enforced in history by govt to people, businesses to stop disease kill so far only 11 while gangs going around killing hundreds people for years and years and more than 11 people by Covid-19.