125 Police Officers Expected To Retire, With 270 To Be Recruited 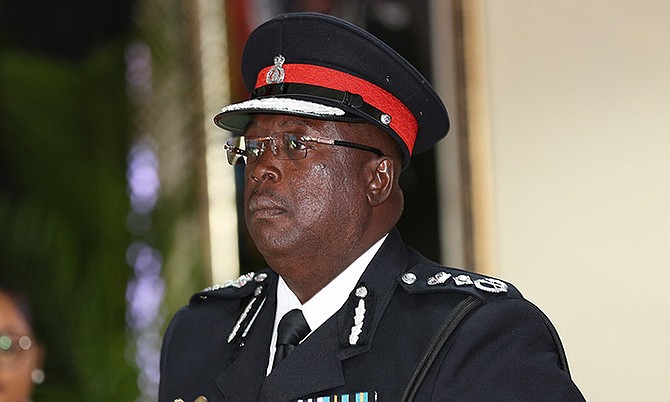 THIRTY-FIVE senior police officers and 90 contracted officers are expected to retire from the Royal Bahamas Police Force this year.

This is according to the policing plan of Commissioner Paul Rolle, which was tabled in the House of Assembly yesterday.

“It is expected that we will recruit some 270 officers during the year, to augment the existing strength and backfill those officers expected to retire,” the document says. “The targeted strength of the force by the end of the year will be 2,787 sworn officers.

“This figure does not consider officers who may resign, be dismissed or pass on. The financial cost for this growth will be $3,232,000, with an additional $4,777,000 which will be required for those officers who will retire.”

This is Commissioner Rolle’s first policing plan since he became chief of police.

He said the RBPF has seven priority areas for the year, including prevention and reduction of crime; financial crime investigations capacity; public and road safety; protecting people at risk of harm; positive youth interaction and reduction of anti-social behaviour; internal service delivery and public confidence; and technology and police operations.

“The priorities that I have identified will encapsulate the direction in which the Royal Bahamas Police Force is heading,” he wrote. “Property crimes and anti-social behaviour will receive the attention that is required to address those issues. Similarly, crimes against the person, particularly those at-risk groups, will receive serious attention to minimise the attractiveness of human trafficking, forced labour and victimisation. Our streets have become a danger zone and as such, much attention will be given to restoring order and respect for other road users.

“I acknowledge that the public demands a police force that is responsive to their needs, particularly where the quality of life issues exist. While the police must avail themselves to the public and be willing to address all issues to satisfy them, the public must also accept responsibility to support, partnership, and cooperate with the police to fulfill the policing mandate to keep all safe and reduce crime.”

the best defense against crime is strong families. If we had fewer single parent homes with parents raising their children with moral values (basic understanding of right and wrong and showing respect for others and their property) we would need less police. We would have less crime.

People need to stop sleeping around like animals and making babies they can't afford and start to take advantage of opportunities to get a better education. If we don't, a select few will keep milking the system to the expense of the Bahamian taxpayer and nothing will ever really change. New Dodge Chargers and police on pension can't fight crime!!

So, once again, instead of belt tightening, there is to be another wanton splurge. More lunaacy. Of these new recruits, how many will already be criminals and how many will become . corrupt if not already?

Does not seem in sync with more advancing technologies like Police surveillance cameras on posts in streets reducing foot patrols, office equipment etc overall and with technology used to replace amounts of staff. ie on hearing a gun shot the car can go directly to that point to arrest the culprit instead several cars scouring the area. Also does not seem in sync with others that crime is reducing.