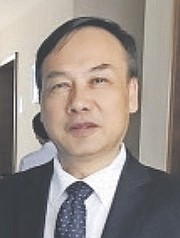 CHINESE officials predict that by the end of the month no new cases of the coronavirus will emerge from the Hubei province, the epicentre of the disease outbreak, even as local Chinese restaurants continue taking a hit over illness fears.

Huang Qinguo, Chinese ambassador to The Bahamas, emphasised the declining numbers of new COVID-19 cases in China as fears increase over cases in Italy, South Korea and Iran.

He added: “According to the projection of the experts of China, we believe that by the end of this month the new increased cases out of Hubei province will be lowered to zero and by the end of April the normal daily life will be restored all around China, except in Hubei. Many cities are in the process of restoring their normal daily lives.”

“Two ministers commended the achievements made by Chinese government and said they will follow the development of the situation in China closely and revisit the policy of The Bahamas and they will consider to lift the restrictions according to their assessment,” he said.

Around the world, Asians have reported rising xenophobia because of the coronavirus and some Chinese businesses have taken a hit.

“We do receive the reports from the Chinese community here saying that due to the worries about the spread of the virus less people are going to Chinese restaurants to have food,” Mr Quinguo said. “That’s a fact. It’s a natural response that reducing the social contact could reduce the risk of spread of the virus.”

In recent days, there have been many more reported new cases of coronavirus in countries outside China than within that country.

The press conference came a day after the government declared China an “infected” place for six months - making it official policy to prohibit non-Bahamian citizens from entering The Bahamas if they have been to that country within the last 20 days.

Health Minister Dr Duane Sands tabled the order in the House of Assembly under the Quarantine Act.

It gives the health minister authority to declare any place outside The Bahamas an infected place for a period of limited duration.

Since January 11, The Bahamas has been denying entry to non-residents who visited China. Returning residents are being quarantined for an incubation period of 14 days. Yesterday, the Ministry of Foreign Affairs extended these travel restrictions to residents and visitors coming from Italy, Iran and South Korea.

NOBODY with a once sense will believe ANYTHING coming from the Chinese!

Especially from Huang Qinguo, Red Chinese ambassador to The Bahamas!

Considering that the comrade Chinese government were hit with COVID-19 - like ton bricks - and without benefit of a solution blueprint - they appear to have responded forcefully, quickly - and openly - considering they're not exactly known for being friendly towards operating as an open society - a damn lot better than can be said about how Donald J.Trump and his cabinet - and republican members congress are responding to what they see as the flu - take couple aspirins, down some warm soup, and get some bed rest.Can you believe this man's -once owned we colony's Paradise Out Island?

The true number currently infected and the actual death toll to date in Red China is no doubt many times higher than the ruthless Xi-led communist regime dare reveal. But right now the international community is willing to give the government of Red China a free pass in the hope that the very draconian measures they have taken will help slowdown as much as possible the inevitable spread to all countries. The U.S. is trying to buy as much time as it possibly can to brace itself for what lies ahead and therefore is not the least bit inclined to talk about Red China's very inhumane treatment of staggering numbers of its citizenry afflicted with the deadly COVID-19 virus. The true death toll in Red China is going to be a most shocking revelation down the road.

Ma Comrade, even the Americans after but two years under a Donald J. and his republican Congress Rule - have come better understand and appreciate what the Chinese government over the same two years - looks like through the eyes its citizen. All data by all governments, and colony's are to be viewed as suspect. There is always much need for improving the way that the world's people, including we the colonial subjects are still being governed.over. Yeah, no?