Face To Face: Khrystle’S Childhood Dream Became A Reality That Can Inspire Women 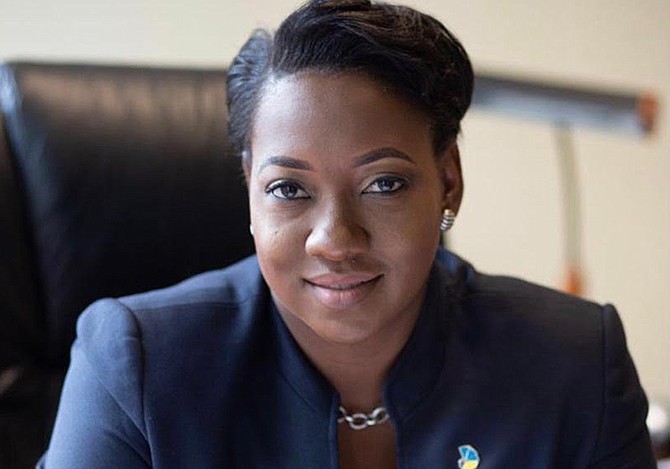 This week began with the recognition of International Women’s Day. It’s a global day celebrating the social, economic, cultural and political achievements of women. In honour of this day, I decided to interview a woman who has achieved so much so early in her career, that she is nothing short of amazing.

Khrystle Rutherford Ferguson may not be one to toot her own horn but today, I am sharing her story in the hope that other Bahamians, especially young females, become inspired by it. At the age of 35, she became the first female to serve as chairman of the Bahamas Chamber of Commerce and Employers Confederation (BCCEC). This in itself is an admirable feat. Couple that with the fact Khrystle is an attorney-at-law who heads the legal department at Fidelity Bank (Bahamas) Limited, and it becomes clear why I am singing her praises for International Women’s Day.

She’s representing the interests of the business community where it’s needed most – helping to create policies that will keep Bahamian businesses viable for years to come.

“This achievement allows me to advocate on behalf of the business community and their needs; advocacy is my specialty,” said Khrystle.

All her life, Khrystle knew she wanted to become an advocate for the people. When she was a little girl, she had dreams of becoming a lawyer.

“My friends would tease me and they would say that I always had a plan for my life in terms of the type of person I wanted to be,” she shared.

“I always wanted to be a lawyer… and consummate professional. I always had a desire to speak on behalf of people, put forth their arguments and represent their needs. I enjoyed speaking up for people and their rights. When I’m out with friends, if something goes wrong, they would say, ‘Let Khrystle speak with whoever is responsible… she will deal with it!’ I was always very opinionated, and I would go out of my way to help people.” 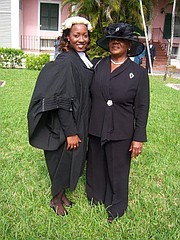 Khrystle attended Queen’s College from grade 1 straight to grade 12. During that time, she was active in Junior Achievement and the Governor General’s Youth Awards (GGYA). After graduating, she decided to study law to allow her to become the advocate she dreamed of being. First, she attended the College of the Bahamas, where she studied law and criminal justice and became a member of the student union (COBUS). She went on to study at the University of Buckingham where she got her LLB – Bachelor’s degree in Law. After that, she passed the Bar at Inns of Court in London before coming home and passing the Bahamas Bar.

Her story sounds like that of a child who came from a privileged background. But on the contrary, Khrystle’s path was not paved by a silver spoon. She had a mother who believed so much in education, that she sacrificed everything for her children to have the tools they needed to succeed in life.

Anita Bartlett, born in Nassau and raised in Bimini, had a long career in the civil service. Well known for her cheery spirit and big smile, Anita became a familiar face at the Ministry of Tourism. On that modest salary, this single mother made miracles happen for her four daughters, Khrystle being the youngest. She made education a priority for her girls and found a way to make it happen. Anita put her skills as a seamstress to use by making uniforms. She religiously took her vacation during the summer months each year in order to sell uniforms to take care of her girls.

It’s something that Khrystle never took for granted. She watched her mother sacrifice and give her all and in return, she set out in life to do her best. 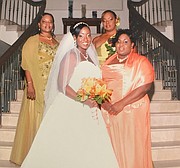 “My mother set the foundation for me to truly believe that I could achieve whatever it is I set my mind to,” she said.

“Because of her, I didn’t look at law school as being difficult at all. Rather, it was purpose-driven. I fully accepted that it was a sacrifice for her to send me off to school. I knew I had to be steadfast in becoming an attorney. It was something I never took for granted or lightly.”

Khrystle often spent time with her mother at her downtown tourism office after school. Her mother’s co-workers knew her as the “little girl in the QC uniform” who loved being with her mother. When Anita died eight years ago, it was a sobering moment for Khrystle and her sisters. Her mother’s larger-than-life spirit is kept alive in the hearts of those who loved her – including her co-workers who watched Khrystle grow. She now works in the same downtown area where her mother worked and even today, from time to time she would come across those co-workers. When they tell her how proud her mother was of her and that they are too, it just gives her the inspiration to keep pushing - keep dreaming, knowing her mother’s spirit of endurance was passed on to her.

“They tell me that I did my mother well – those sort of things, although she is not here, makes me feel proud,” said Khrystle.

“Every child, apart from making their own mark in the world, wants their parents to be proud of them. So, it makes me feel good to know she was proud of me.”

Sisterly love also played an important part in Khrystle’s life as her elder sisters Kim, Kenva and Urshula were always protecting and guiding her. As a wife and mother today, her life is full of joy. Her husband Jevone Ferguson is her source of strength – “a very brilliant and intelligent man who is a wonderful husband and father” to their two sons, Maxwell and Camden.

She needs that support as she has entered this new phase of her life as chairman of the BCCEC. Prior to being elected to this post, she served in the organisation for years. She held the positions of vice chairman, director, chair of the strategic planning committee, chair of the policy, regulation and commercial dispute settlement committee and a member of the governance committee.

“I feel great being able to pioneer in this way,” she said about her two-year term as chairman.

“Though I may be the first female chairman of the BCCEC, there were women presidents when it was just the Bahamas Chamber of Commerce, including Judy Munroe, Lorraine Frasier and Tanya Wright. Even from the early days, there were women who laid the foundation. But it’s been 16 years since a woman has been at the helm, so it feels good. It’s important to include both men and women at the table because it provides both tangible and intangible benefits for the country. Through this opportunity, I can leave the door open behind me for women to feel empowered to continue to lead.” 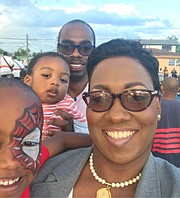 Khrystle and husband Jevon with their sons Maxwell and Camden.

“At the BCCEC, we are very passionate about narrowing the skills gap. As a result of that, we will be reviving the chamber institute to provide a forum for the business community and their employees to have access to training in a number of areas. The other major thing I would like to achieve is to put in a research desk for the private sector that will allow our members to have access to empirical data on market trends… data that would grow their business and take it to the next level. We are also ramping up membership engagement. We are reaching out and communicating with members, making sure they are a part of the national discussion and making sure they feel they have representation at all levels. After Hurricane Dorian, we were able to launch a programme under the patronage of Mrs Patricia Minnis that provided school uniforms to displaced children.”

Khrystle’s advocacy is also seen in the press releases she often disseminates to the public. They provide keen financial advice from a legal aspect, in order to empower her fellow citizens with vital information. She has been at Fidelity Bank for the past ten years, and her commitment to her job has elevated her to head of the legal department. Prior to joining Fidelity, Khrystle spent a few years as a junior attorney to Ruth Bowe-Darville, a noted attorney and former president of the Bahamas Bar Association. Khrystle says she learned so much under Bowe-Darville’s tutelage, not only in law but the hallmarks of being an attorney, including always being prepared for court, doing intense legal research, being respectful of colleagues at the Bar and the Judiciary, and putting in the work to achieve the best results for the client.

In addition to lending her knowledge of law and banking to the nation, Khrystle has found other ways to give back. She has been involved in many organisations, including the Bahamas Financial Services Board, the Bahamas Bar Association, Toastmasters Club 7178, and she is a member of the Honourable Society of Lincoln’s Inn.

She is a member of the Clearing Banks Association’s Legal and Compliance Sub-Committee, and the National Advisory Council for the introduction of Local Government to New Providence, leading its revenue and expenditure team. She also served as member of the Supervisory Committee (Audit Committee) of Teachers and Salaried Workers Co-operative Credit Union. One of the most important areas of involvement to her is her spiritual life at Abundant Life Bible Church.

With all she has achieved, Khrystle still believes she has more to go. She balances the professional aspects of her life with her creative talents bequeathed by her mother. She enjoys decorating and event planning for herself, as well as family and friends. She enjoys reading, cooking and travelling, and has found joy in growing and tending to orchids. With a life so full – a story of sisterhood and friendships, turning pain into purpose – I took pleasure in sharing her story in honour of International Women’s day.

Congratulations to this young lady! This story is quite impressive. Wishing her great success in this endeavour.

Each time we begin lose hope for we Colony of Out Islands and Cays - along comes a columnist Felicity with a motivating Face to Face story with ways to avoid losing hope - ether by birth, adaptation or choice in the Homeland. Comrade Sister Khrystie - they tell you right that you did your Mother well - and, yes, indeed Mommy was there by your side - proudly - each and every step and stumble. Now, give as much of as the all what Mommy Anita gave to you to inspire a whole new generation Out Islanders. A proud shout out to husband Jevon and sons Maxwell and Camden.