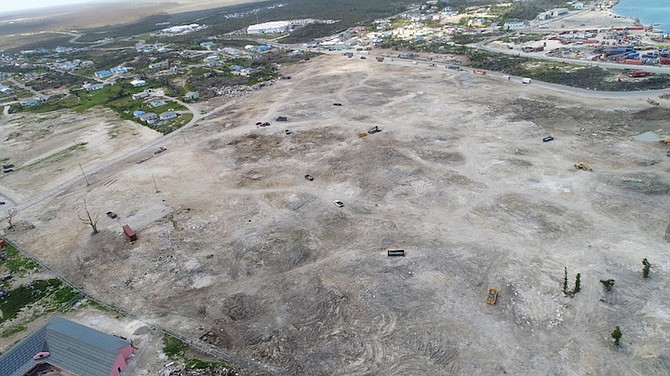 The Mudd area after the clean-up.

TWENTY million dollars has been spent so far on Hurricane Dorian debris cleanup in Grand Bahama and Abaco.

This is according to Katherine Forbes-Smith, managing director of the Disaster Reconstruction Authority.

“Hurricane Dorian produced an unprecedented amount of debris in Abaco and Grand Bahama,” she said. “Such debris accumulation in a matter of days has never been experienced in The Bahamas.”

Hurricane Dorian hit Abaco and Grand Bahama in September. With maximum sustained winds of 185 miles per hour, it was the strongest storm to hit The Bahamas. It is estimated that the storm caused $3.4 billion in losses and damage.

Despite the vast efforts to clear the disaster zones, much cleanup work is still required.

“Since mid-February the DRA has been reviewing existing collection contracts, preparing to augment collection in areas not covered by those contracts,” Mrs Forbes-Smith said. “We are making steady progress on the mainland of Abaco and Grand Bahama. We will be increasing our focus on collection efforts throughout the Abaco cays.

“Additionally, we will be investigating and implementing solutions for the debris management sites in Spring City and Treasure Cay, as well as improving the landfill facility at Snake Cay.”

She said Dorian has exposed the need for a comprehensive waste management plan in the country.

“With the dozens of inhabited islands in the archipelago, the plan must be applicable to the local level,” said Mrs Forbes-Smith.

“This plan should also be easy to implement and execute within each community based on local capacity and know-how.”

There are currently open-air dumps across the islands and cays that are managed in various ways.

“Some of the open-air dumps in Abaco sit close to, on, or near critical ecosystems and natural aquifers and blue systems that lead to the sea,” said Mrs Forbes-Smith.

“Municipal solid waste that is disposed of in the open-air dumps are composed of mixed waste, and often contain waste streams that could easily be removed and composted, reused or recycled. Instead, the waste is burned.

“This is dangerous and not good for the environment.”

Due to the large amount of debris in Abaco and Grand Bahama, Mrs Forbes-Smith added, the DRA will have to establish a rational waste plan for these islands, institutionalising some of what is beginning to take place.

Dorian also swept a large amount of debris into the sea, a press release from DRA noted.

The authority has received survey information on marine debris in the East Grand Bahama area. The marine areas in and around the Abaco mainland and cays have to be surveyed.

“Once done we will issue marine cleanup RFPs (requests for proposals). This will be a major cleanup effort,” said Mrs Forbes-Smith.

What's been cleaned up so far could and should have been done for half of what has been truly spent to date. Forbes-Smith is nothing but a lying tool of Minnis.