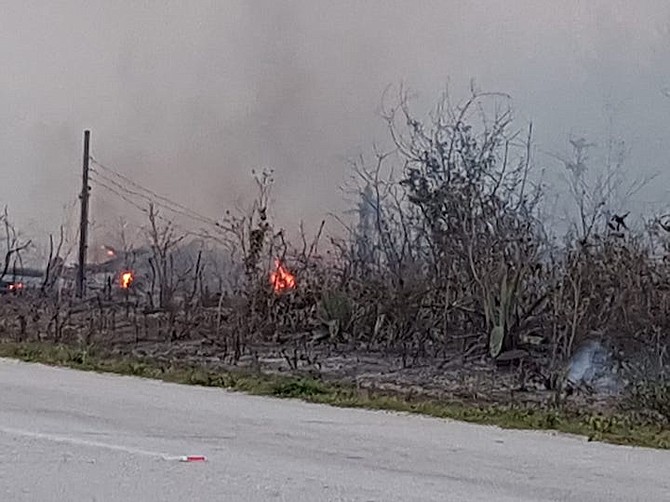 The blaze ripped through the pine forest in the Freeport Ridge Estates area.

A MASSIVE brush fire in Grand Bahama was fuelled by high winds and hurricane debris, posing a serious concern for firefighters and some residents.

The blaze ripped through the pine forest in the Freeport Ridge Estates area and threatened several residential properties on Monday.

Inspector Elie Ariscar, of the Royal Bahamas Police Force Fire Services, said that dry, and extremely windy conditions, along with heaps of debris, posed a major challenge to firefighters in their efforts to contain the fire, which started around 10am on Monday. Up to press time, the fire was still burning but was contained, according to police.

“The fire is still burning, and we are still experiencing very windy conditions today,” he said yesterday, during an official update at the Fire Station Complex in Freeport.

According to Inspector Ariscar, the cause of the fire is still under investigation but is suspected to have resulted from “indiscriminate lighting” of garbage by unknown persons.

“We are appealing to residents to refrain from burning trash on their property as it is an offence,” he warned.

The fire inspector reported that the main challenge was the amount of debris due to the storm, as well as from homeowners who had dumped debris in the area.

“That presented an issue for us and we encountered difficulty moving our trucks in certain areas to tackle the fire,” he explained.

“We are asking persons to get debris removed by Sanitation Station which would help us tremendously in doing our jobs as the forest is still burning,” he said.

According to reports, fire officials responded to a call around 10am on Monday in Freeport Ridge Estates. Upon arrival, they observed a large blaze and had to call for additional resources.

Inspector Ariscar said two additional units were dispatched to the area to battle the blaze that was moving rapidly towards the east.

“There were multiple areas burning at the same time, and the fire was moving towards the east due to high winds, so we had to strategically place our trucks throughout different areas in the forests to contain the fire,” he explained.

The official reported that because homes are sparsely located throughout the area, they had to work as quickly as possible to protect those properties.

There was minor damage to two shacks, reported Inspector Ariscar, who noted many derelict vehicles were also destroyed.

“At this time, the fire is still under active investigations, but we suspect it was someone doing some indiscriminate lighting of something in the back there,” he said.

Inspector Ariscar said brush fire season runs from December to March, and sometimes into late April. “Around this time is usually windy, and dry because we don’t get that much rain and so we tend to get fires during this time.”

Concerned resident Brian Seymour, of Royal Palm Bay Subdivision, said that the massive debris accumulation in that area is a very big concern for him and other residents.

He noted that Royal Palm Bay is a “tinder box” due to heaps of dry forest debris and boats that have accumulated in the area in the six months since the storm.

The area was among those hardest hit by Dorian. Many homes were destroyed, but some residents have and are beginning to return to rebuild.

“Fire is a concern and with all the debris still in the area and we are in the dry season,” Mr Seymour said.

In January, Mr Seymour raised concerns about boats that were blocking road access, downed power lines and poles, and debris removal, calling on those responsible to clean up the area.

Mr Seymour recently criticised area representative K Peter Turnquest, the MP for East Grand Bahama, whom he feels is not doing anything to facilitate the removal of debris from that area.

“The Honorable Kevin Peter Turnquest, deputy prime minister, and minister of finance and MP EGB, lives approximately 2.2 miles south of Royal Palm Bay Subdivision, one of the areas he represents and has contemptuously neglected,” he claimed.

“Turnquest has been derelict in his duties as an MP. His response to the people of RPB in the aftermath of Hurricane Dorian has demonstrated to us all that he is not a servant leader: but a politician.”

Mr Seymour noted that in the neighbouring constituency, Marco City MP Michael Pintard has contracted workers to go from street to street clearing verges and carting away of storm debris, he said.