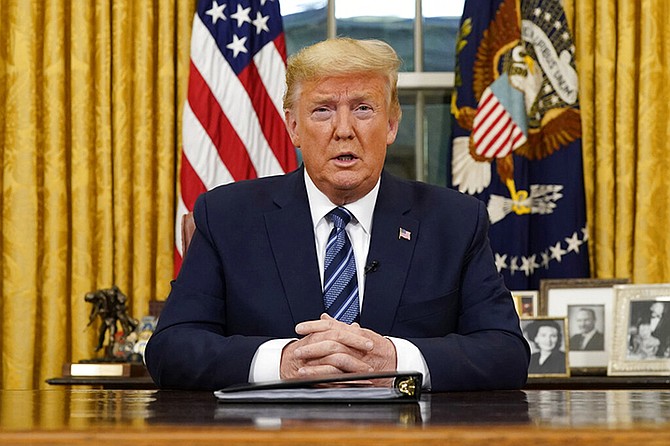 President Donald Trump speaks in an address to the nation from the Oval Office at the White House about the coronavirus Wednesday, in Washington. (Doug Mills/The New York Times via AP, Pool)

WASHINGTON (AP) — President Donald Trump said Wednesday he is suspending all travel between the U.S. and Europe for 30 days beginning Friday as he seeks to combat a viral pandemic.

Trump made the announcement in an Oval Office address to the nation, blaming the European Union for not acting quickly enough to address the "foreign virus" and saying U.S. clusters were "seeded" by European travelers.

"We made a lifesaving move with early action on China," Trump said. "Now we must take the same action with Europe."

Trump said the restrictions won't apply to the United Kingdom and the U.S. would monitor the situation to determine if travel could be reopened earlier.

Trump said he was also directing agencies to provide unspecified financial relief for "for workers who are ill, quarantined or caring for others due to coronavirus," and asked Congress to take action to extend it.

Trump said the U.S. will will defer tax payments for some individual and business filers for three months to lessen the impacts of the virus outbreak. He said the Small Business Administration will also make low-interest loans available to businesses to help them weather the storm.

"This is not a financial crisis," he said. "This just a temporary moment of time that we will overcome together as a nation and as a world."

Trump also reiterated his call on Congress to pass a cut to the federal payroll tax in order to stimulate the economy.

Trump said "we are marshaling the full power" of the government and private sector to protect the American people.

Meanwhile our corrupt Minnis-led FNM government is considering relaxing existing travel restrictions between The Bahamas and China and several other high risk countries. Minnis is more concerned about the financial and other interests of Red China and the foreign cruise ship companies than he is about protecting the lives of the Bahamian people. This certainly meets the definition of evil.

Trump is refusing his own advisors suggestion that he be tested after being exposed to several persons who have tested positive for the virus. He also refuses to cancel his political rallies. Hyprocrite in the White House

The Pope similarly refused to be tested even after showing symptoms. Is he a hypocrite in the Apostolic Palace?

Not be beating up on a US president but is this particular comrade prez man's unfit for the Oval Office - or what? And, the republican strategists operating from PMO are equally as mental - think they all have valid work permits? The N.B.A. - just suspended all basketball games. Back here at home - likes how many have been tested to date - do we even have test kits? Comrades, this coronovirus just got real for Colony's substantive health minister Dr. Duane.

U.S. goods imports from United Kingdom totaled $60.8 billion - whilst US imports goods from EU totaled $487.9 billion for the same 2018 year.Just slight difference in the billions between the UK and EU. The UK's Fish Mongers, actually sold a greater value Fish in 2018 to the Fish and Chips Shops than the UK exported to the USA.

I guess its worth a shot but seems a little too late if it's meant to stop importation of the virus... the president just shook hands with someone who shook hands with an infected individual. it was probably too late when wuhan realized there was a problem. And what a strange turnaround for a president and republican party who were pushing this as a giant democratic hoax

Let's just say that many sense that comrade pres be's in late stage experiencing some unbalances upstairs issues. Like we in Colony likes point we finger at top we head, Em fellow ain't so all straight upstairs.

unbalances :-|? It's likely the stairs collapsed on both of them

There are probably infections here as well but noone's been tested to confirm. and with hypertension being a risk factor... the Bahamas..well hope and pray...

the hypertension thing (If correct) would make sense for why children aren't affected...you don't typically find kids with hypertension.."typically"...

The government should follow the U.S. lead and suspend travel between the Bahamas and Europe (including Uk) For 30 Days.

Not doing so is a fatal mistake that will cost many lives and unnecessary suffering for any number of people!

The Bahamas was all in, front and center to join the U.S. war on drugs, incarcerating and ruining our peoples' lives, but we cannot seem to "undo" stupid and legalize ganja even after the U.S. has changed course.