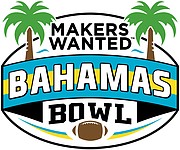 THE Elk Grove Village/Makers Wanted have withdrawn its title sponsorship of the annual Bahamas Bowl. But it's expected that the United States college football game will continue at the Thomas A Robinson National Stadium in December.

However, on Tuesday, the village located in northeastern Illinois adjacent to O'Hare International Airport, Chicago, withdrew its sponsorship.

Elk Grove Village, which used the game to market its massive industrial park, had a March 1 deadline from ESPN Productions on whether to do the sponsorship again.

"Elk Grove Village/Makers Wanted will not be returning as the title sponsor of the Bahamas Bowl," an ESPN spokesperson said. "We thank them for their support of our game and community over the last two years."

But one source close to the Bahamas Bowl said their withdrawal will not affect the Bahamas Bowl's future. He noted that the bowl game will continue as it has for the last six years.

Speaking under the condition of anonymity, the source said this is no different than when Popeyes moved on from sponsorship of the bowl after the 2016 game.

The Bahamas Bowl, which is carried live on ESPN, got started in 2014 when Western Kentucky University nipped Central Michigan 49-48 in the highest-scoring game played.

No date has been set for this year's game, which is expected to be played the weekend before Christmas.