Stateside: Could Trump’S Apparent Lack Of Interest In The Virus Crisis Finally Be His Undoing? 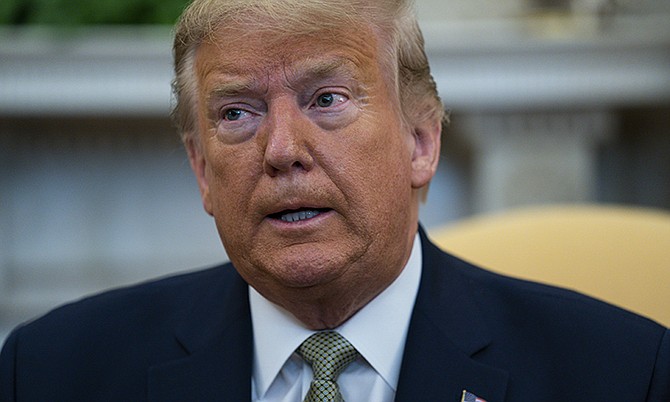 President Donald Trump’s administration is not going to make many friends in the Western Hemisphere generally or in tourist-dependent areas like The Bahamas if current suspicions are validated that Trump & Co deliberately downplayed the coronavirus threat to keep the stock market at high levels to buttress his re-election campaign.

American tourists are notorious for changing or cancelling travel plans in the face of health or security threats.

Charges have been flying for the past week that Trump, who personally appears to remain largely disinterested in the potentially massive health threat to the US, overruled medical experts and aides whose warnings that glossing over the dangers of the virus would only exacerbate their inexorable deleterious effects on the nation’s health.

The news outlets most committed to unseating Trump in November – The New York Times, Washington Post, CNN and MSNBC – have all been running stories that chronicle Trump’s efforts to minimize the virus crisis even as evidence mounted of its severity.

The US is looking just as unprepared and unable to combat the virus as it was to assist Hurricane Katrina-ravaged New Orleans in 2005 when George W Bush was president. Remember when Bush said “You’re doing a great job, Brownie” to his FEMA director even as the federal government was falling flat on its face with relief efforts?

Trump has been intermittently praising his medical and disease prevention experts at the same time undercutting their cautionary messages to the public. As he dithered about whether or not to visit the Centre for Disease Control in Atlanta recently, reports circulated that he was more concerned about the possibility of becoming infected himself than in demonstrating support for his government’s lead agency charged with combatting this growing health crisis.

And when Trump did finally show up in Atlanta wearing his 2020 campaign hat which blared “Keep America Great,” there was some inescapable irony in the resulting images.

In an additional irony doubtless savoured by the tens of millions of American voters increasingly anxious for Trump to depart the White House, it turned out the recent annual Conservative Political Action Committee conference in Washington, which Trump addressed, included someone suspected of coronavirus infection. What if Trump, the denier in chief of the current pandemic, were to become infected himself?

Texas Senator and 2016 Trump opponent Ted Cruz, another CPAC attendee, has self-quarantined after hearing the news of the delegate’s infection.

Whether the news reports of Trump’s regrettable sense of priorities in downplaying the pandemic’s threat are true or “fake news”, the coronavirus and the associated stock market slide are threatening to put a serious dent in his re-election prospects.

Those prospects were further dinged as Democrats seemed to be following the practical lead of their most loyal and reliable constituency. African-Americans have been telling pollsters for months that their highest 2020 election priority is dismissing Trump. No amount of gauzy promises or free government giveaways from Bernie Sanders appears to be able to sway them from this fundamental goal.

The black vote propelled Joe Biden to his big, momentous primary victory in South Carolina, which in turn begat unexpected success across the US on Super Tuesday that in turn was sustained on Tuesday as the former Vice President claimed victory in Michigan, where he will also need to prevail in November.

Biden also won in a variety of smaller states, most of which will support Trump no matter how outrageously or even illegally he behaves between now and November. It looks like Biden and Sanders will split the delegates from Washington state.

Superficially, it may appear Biden’s popularity among black voters flows from his close friendship and collaboration with former President Barack Obama, whose basic dignity remains in such stark contrast to the bombastic Trump.

The truth may be more complex. Never in recent memory has an American chief executive been so scrutinized and psychoanalyzed as has Trump. He has, to use a psychologist’s term, disregulated the American psyche. What were for generations regarded as political and social norms for a President have been casually discarded during the current administration.

The result is a profound yearning for some kind of predictable normalcy. Voters are clearly seeking a sense that their President is capable of and willing to put the interests of the country that elected him above his own personal prerogatives and profits. Trump, in too many minds, does not pass this elemental test.

Biden is old. He is older than Trump. He is a political retread. This is his third and exponentially most successful run for President. But political friends and foes alike readily admit he is a decent man, and the poignant story of his son Beau – an Iraq war veteran and accomplished politician who died in 2015 of brain cancer – adds to the basic appeal of this Average Joe (or Sleepy Joe, as Trump calls him). It may be that the sordid story of another son, Hunter, has run its scandalous course, but we will see about that.

Many of Biden’s erstwhile rivals for this year’s Democratic presidential nomination have now endorsed him, with California senator Kamala Harris joining the group on Sunday. New Jersey senator Cory Booker signed on with the Biden campaign the next day.

It may be that we are witnessing the takeover of the Democratic Party as pundits have been forecasting, but not by left-wing ideologues as has been so frequently and loudly reported. The takeover may instead be by pragmatists driven by the African Americans’ singular priority to kick Trump out of the White House.

By the way, if Biden were to prevail in November, can you imagine the position of South Carolina Rep. James Clyburn, the House Majority Whip whose well-timed endorsement of Biden is credited with impelling the former VP to his huge South Carolina win? Biden would owe Clyburn big-time. A recommendation from the South Carolina legislator could lead to big things in a prospective Biden administration.

But we might be getting ahead of ourselves. The general election is still eight long months away.

As the Trump campaign machine adjusts to the increasing likelihood of a Biden nomination to oppose the president in November, a new line of attack is becoming apparent. The Trump campaign will milk the Hunter Biden story as long as it possibly can, but the Democrats can fire back with the arsenal of ammunition they possess on the president’s own family and unmerited assignments.

Trump’s children and son-in-law have all been given positions in his business, campaign and administration for which they are profoundly unqualified. The damage done to America’s foreign policy by callow Jared Kushner, for instance, may be hard for the next administration to repair, particularly in, but not limited to, the Middle East.

The new line of Republican attack has ‘Sleepy Joe’ as its emblem. Trump’s bloggers and Fox News are pushing the line that Biden is senile, mentally slow or worse. Biden will have to demonstrate by improved debate performances and campaign appearances that this is untrue.

Perhaps more dangerous is Biden’s temper. The other day at a rally in Detroit, someone approached him with the accusation that the former vice president wants to take away everyone’s guns. Biden flashed his anger, and said ‘You’re full of s___.”

Many supporters are hoping to see that temper directed at Trump on the debate stage this fall. Given Trump’s years of bullying behaviour, it will please many to see him get a taste of his own medicine.

But Biden cannot misbehave or lose his composure when confronting provocative voters. That will properly erode his support and make him look little better than the man he hopes to defeat.

And meanwhile your chosen one Andrew Gillum ,the democrat that ran for governor in Florida, was found with two men in a hotel in Miami last night with meth and Naked! One man had OD Andrew say he wish private time for him and family as he try to explain to his wife why he on the down low ….bungee style!