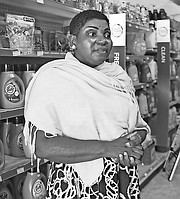 LOCAL shoppers stocked up on cleaning supplies yesterday amid fears of a coronavirus outbreak.

At one pharmacy, The Tribune spoke with a number of customers who said they were purchasing toiletries and disinfecting products to decrease their chances of contracting the disease if it enters Bahamian borders.

One shopper, Alicia Thompson, said she was buying “Lysol, Clorox and essential cleaning supplies,” because she believed it was only a matter of time before the virus reaches the country.

“I am preparing for creating as clean an environment as I can because the reality is I believe it’s on its way here,” she said.

“I’m not silly or foolish in thinking that we’re going to be exempted or we are just more special than anybody else and so I believe that preparation is the key.”

Still, Ms Thompson said she was stocking up on particular items out of caution and not panic. She insisted there was no need for alarm, but added it was vital people take the news seriously and prepare.

“We don’t know how serious it’s going to be, but I do believe that prevention is much better than cure. We know that it is very easy to become inundated with so much on social media and if you’re not careful, then you can really run yourself into a problem.

“So I’ve been getting information from the CDC and my place of employment is doing a very good job of keeping us updated on things that are happening. So I’m fine, I’m not anxious but I’m just getting ready.”

Another concerned shopper, Soula Lightbourne, said while she wasn’t panicking, she wanted to make sure she was prepared for any possible outcome.

“I’ve just started stocking up on Clorox sprays, Dettol and soap because I’m being cautious,” she told The Tribune.

“I’m very concerned, not just for me but I have kids...you know the kids interact every day with other kids in school and they aren’t as cautious as us.

“I have boys, they play fight and they drink other people’s stuff (and) as much as you say don’t do it, you know they do it so it’s a bit alarming.”

Ms Lightbourne said she did not believe the international hysteria around the virus until she saw some of the reactions coming out of America. 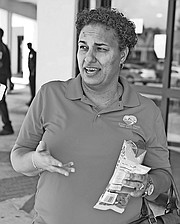 “I didn’t believe it before but I work at a wholesale company and we deal with our companies in the States so we now know (the fear over the virus) is true.

“All of our vendors in the States, they are starting to push for hand sanitisers and stuff and by the time I order, they’re saying ‘Oh we’re out, so now you have to wait’ so now I know it’s real.”

Another shopper, who asked to be identified as E Edgecombe, said she doesn’t understand why some Bahamians are so fearful.

“I think some Bahamians are over-panicking right now,” she said. “You probably need some tissue. If you’re under quarantine or watch and you have to stay home two weeks, then I can see you trying to hustle around to get as much products as you need.

“But right now I think you just have to pray and prepare yourself without trying to spend your entire month’s salary on buying crap.”

Ms Edgecombe said the only products she has bought so far are toilet paper and hand wash.

She was dumbstruck by the apparent mad rush of some to hoard supplies.

“If you watch the international news, as far as the information I’m aware of, it’s only been fatally impacting people with preexisting conditions.

“In terms of young healthy people like us, we’re probably going to be fine. So I’d say just stock up on some vitamin C, stay inside and don’t shake nobody hand.”

Locals were not the only ones concerned about the coronavirus pandemic.

The Tatum family, tourists visiting Nassau from the United States, said they were “washing their hands a lot and trying to be cautious,” in the wake of COVID-19.

They also told this newspaper that the recent European travel ban US President Trump enforced in America made them “a little nervous.”

“We wash our hands and we’re aware of our surroundings,” Christy Tatum said.

She added that while they had no plans to cut their current vacation short, they were starting to get very anxious considering the global outbreak.

“It does affect travel plans in the future because we’ve called off plans to travel to Europe. We were thinking to go to Greece this summer, but we’re not going to do any of that this year anymore.”

Her husband, Terry Tatum added: “We’re kind of worried about going back home because even in the state of Utah, which is in the middle of the desert, we’re seeing that some people have been diagnosed with COVID-19 and it’s kind of scary.”

According to the World Health Organisation, globally there were 125,048 confirmed COVID-19 cases and 4,613 deaths up to press time.