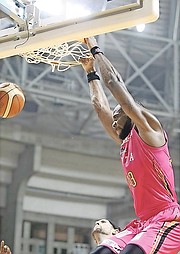 DESPITE concerns expressed by several stakeholders affiliated with the Japanese B-League, Kadeem Coleby and the remainder of the league resumed play last weekend as the coronavirus COVID 19 outbreak continues.

Coleby returned to the court as his Akita Northern Happinets split the weekend series with the Hitachi Sunrockers.

Arenas were filled with players, essential personnel and television crews only as the mandate of playing without fans will be in place until April 1.

In game one on Saturday, Coleby finished with 12 points (6-7 from the field) and eight rebounds to lead the Happinets to an 87-83 win. It was the first game for the Happinets since February 16 when the league-wide suspension began.

Akita is currently 19-22 on the season, fifth in the league standings.

Through 34 games this season, Coleby is averaging 10.1 points per game on 54 per cent shooting from the field. He is also averaging 6.9 rebounds and 2.0 blocks in just over 26 minutes per game

Last season, Coleby took home the trophy for the league lead in blocked shots (2.4 per game) in his second season with the Happinets.

In 52 games, he averaged 12.8 points and 8.4 rebounds and his aforementioned league lead in blocks in 30 minutes per game.

Coleby completed his second season with the club after they were promoted from the B2 League last year.

The league returned to confusion and mixed reactions from players and coaches, according to the Japan Times.

The matchup between the Happinets and the Sunrockers was one of few B-League games without incident as the league returned according to “The Times.”

A game between the Levanga Hokkaido and Kawasaki Brave Thunders at Todoroki Arena was cancelled prior tipoff after three Levanga players were diagnosed with a fever.

In addition, three players for the Shiga Lakestars sat out their game because of concerns over the virus.

The following day, the game between the Utsunomiya Brex and Chiba Jets Funabashi was called off after one of the referees was found to have a fever.