Churches Happy They Got Their Message Across 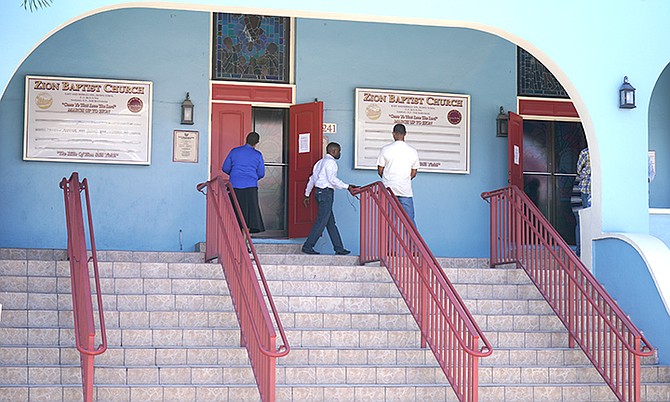 CHURCHES across the country used online platforms to conduct Sunday services for their members yesterday after agreeing last week to suspend mass gatherings to prevent the spread of COVID-19.

Ahead of Prime Minister Dr Hubert Minnis’ emergency orders, religious leaders had agreed to cancel church services and other related events in light of the novel virus, which has now spread worldwide.

President of the Christian Council, Bishop Delton Fernander told The Tribune yesterday he believed most churches in New Providence complied with the social distancing suggestions from government.

“It appears to be that all complied. Even the ones who said they wouldn’t comply, complied,” he said. “It was a very successful tool. We might’ve had more viewership (online) than we ever had before.”

Similar sentiments were also expressed by Anglican diocese Bishop Laish Boyd who said some members had even resorted to text messaging for spiritual encouragement. “As a diocese, we had one eucharist that was celebrated by me and aired on ZNS at 11 and Cable Bahamas at 2pm and it was also on Facebook and Youtube through the diocese website and (it) was extremely well received,” he added.

“What’s been happening is a number of our churches and individuals have been sending messages doing morning and evening prayers, holding morning prayers over Zoom and it’s all been going very well.”

Meanwhile, Bishop Silbert Mills of Friendship Tabernacle Church in Abaco said: “The members and followers of our church were advised not to come to service by myself in response to the Prime Minister’s declaration and to watch out for the service online.

“But, I think it was well received and the word was not one that was confrontational but to encourage the people that this is a serious situation that we’re in.”

Last week, Dr Minnis announced that a national curfew would be implemented in the country, mandating people to remain in their homes until March 31 between 9pm and 5am. The order also calls for most businesses to close, and staff to work from home, with few exceptions.

Dr Minnis also ordered that people in establishments or businesses distance themselves from others at a minimum of three to six feet.

Warning that large gatherings are linked to the spread of the virus, the prime minister also urged people with upcoming weddings and funerals to either scale down the events to only 10 people or postpone the events. Since the announcement, many churches have suspended worship services until April, resorting to online streams for viewers.

Still, there were some religious organisations who maintained that their doors will remain open for worship despite the suggestions from health officials.

Speaking to The Tribune on Thursday, senior pastor of Zion Baptist Church, T G Morrison said: “The doors of Zion will be open. The church is a place of refuge. I have a fundamental struggle to see the courts of the house of God closed, even in hurricanes the houses of worship are used as shelters.”

However, when The Tribune visited the church yesterday, one member said the church was complying with the guidelines and streaming online for its members.