Miller-Uibo: ‘I Am Coping Okay With This Pandemic’ 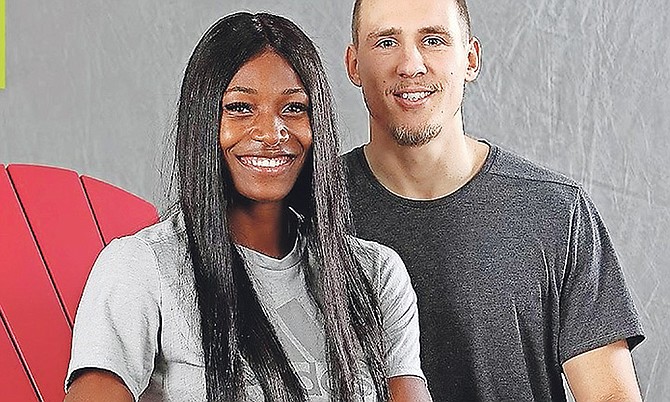 With the world of sports on hold due to the deadly COVID-19 pandemic, Bahamian Olympic champion Shaunae Miller-Uibo and her husband, Maicel Uibo, are busy taking advantage of their makeshift training site at home in Clermont, Florida.

“I am coping okay with this pandemic,” said Miller-Uibo in an interview with The Tribune over the weekend. “I am trying to abide by the rules and orders given to us to ensure our safety.”

Just like the Bahamas, which is under a 24-hour curfew and weekend lockdowns, Florida is also faced with curfews that restrict the free movement of persons, who have to practice social distancing of at least six feet apart from each other.

On March 11, the National Basketball Association began a domino effect of the stoppage of sports when they halted their regular season after Utah Jazz’s centre Rudy Gobert was the first athlete tested positive for the coronavirus.

World Athletics, the government body for athletics with a membership of more than 200 countries, has indicated that they intend to hold an abbreviated season later this year. However, World Athletics, formally the International Amateur Athletic Federation, has not revealed any starting date.

Miller-Uibo was not expected to compete in the championships, but her 27-year-old husband was scheduled to represent Estonia in the men’s heptathlon as he attempted to improve on his bronze medal won at the 2018 championships in Birmingham, United Kingdom.

The 26-year-old Miller-Uibo, who last competed at the World Indoor Championships in 2014 in Sopot, Poland, where she captured a bronze medal in the women’s 400m, was content with just getting ready for the outdoor season.

“To stay fit, I am exercising daily and working out in my home gym, riding bikes in the neighbourhood, and going for a run at a nearby park,” she stated.

From day to day, Miller-Uibo revealed that the couple, who met while attending the University of Georgia and got married in 2017 at the Atlantis resort on Paradise Island, developed a consistent training pattern that has worked very well for them.

“The daily routine for me is simple,” she reflected. “I train, eat, and spend time with my husband and dogs.”

Before the lockdown of sporting activities, Miller-Uibo was hoping to get back on track after running an impressive 48.37 seconds for an area and Bahamian national record for the silver medal in the final of the women’s 400m at the World Athletics’ 2019 World Championships that was held in Doha, Qatar.

The gold went to Bahrain’s Salwa Eid Naser, who posted a world-leading time of 48.14 for the third fastest in the history of the event.

Miller-Uibo’s time was listed as the 10th fastest, but only five other women have ran faster than her, including Germany’s Marita Koch, who has posted five of the top times, including her impressive world record of 47.60.

While she waits for the restrictions to be lifted and normal life to resume, Miller-Uibo said she’s looking forward to one specific thing.

“When this is over, the first thing I will like to do is spend quality time with family and friends,” said Miller-Uibo, who is looking forward to returning home to the Bahamas for some much-needed relaxation and revitalisation.

In order to get through this pandemic, Miller-Uibo encouraged everyone to simply follow the rules. “My advice to Bahamians is to pay attention to the orders given by the government,” she said. “Continue to fast and pray and ask God to keep the Bahamian people safe through this pandemic. Stay safe and God bless you all.”